The most moderate, sensible political journalist alive tells the raging white populists to stop being so angry 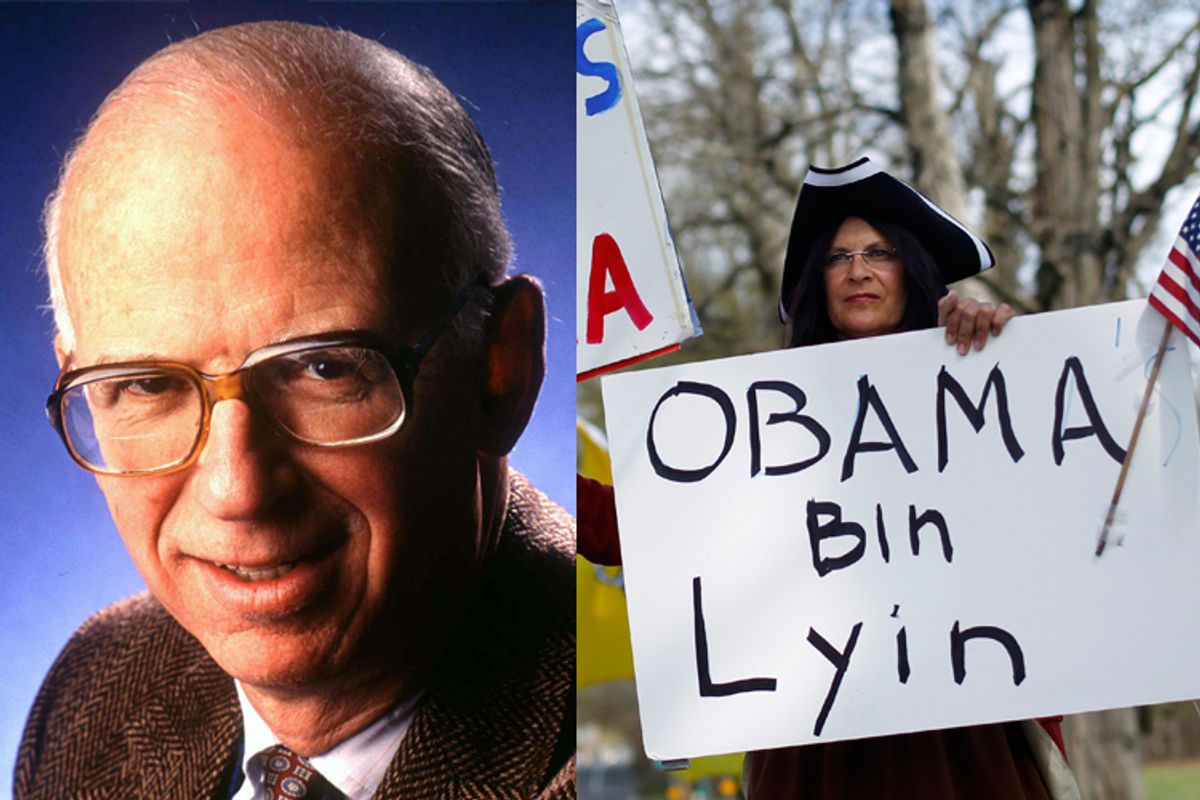 Extremist moderate Washington Post columnist David Broder -- the dean of American political journalists -- has some helpful, moderate advice for "the Tea Parties," an exciting political movement he heard about on "Meet the Press": They should become happy and moderate.

Knowing he needed to learn more about "the Tea Parties" before he wrote a Sunday newspaper opinion column all about them, Broder turned to American Enterprise Institute vice-president Henry Olsen, who is not affiliated with "the Tea Parties," but is a longtime conservative think tank fixture who recently wrote a lengthy piece on American populism for a largely unread political journal.

Yes, this member of the Washington conservative think tank elite will definitely help Broder understand what these "Tea Parties" are all about.

The history of American populism, according to Olsen as filtered through reflexive centrist Broder, is a history of two distinct sides, liberal and conservative, that were both unsuccessful not because of the merits of their ideas or the righteousness or destructiveness of their ideologies, but because they were both too extreme. The conservative populists became successful when Ronald Reagan appeared to move them toward the center. Once ideas are mainstream, they are good. Before they are mainstream, they are scary and bad and wrong. The end.

Oh, but what should the "Tea Parties" do, according to Broder?

[William Jennings] Bryan failed in part "because he made a majority afraid. Some libertarian populists, with their rejection of every facet of the modern welfare state, are likely to do the same -- because even this center-right nation does not want to see the welfare state dismantled." Republican Senate candidates in Kentucky and Nevada need to have those words imprinted on their brains.

Huh. OK. So, if libertarian populists want to succeed, they should stop advocating for the dismantling of the welfare state. I cannot foresee a problem with that proposal.

The need for Republicans, then, is to do what Reagan did -- "to propose alternatives that offer a real change of direction without seeming too radical." He had an advantage that is too often overlooked. As the two-term governor of our most populous state, Reagan could answer those who viewed him as dangerous by pointing to the success he had achieved in managing California.

The new conservative populists, Olsen says, need their own positive vision, one that can "turn an intense but transient public sentiment into an enduring political force."

The Republicans need a positive vision, like Ronald Reagan. And "alternatives" that don't seem "too radical." I am sure the Tea Partiers will agree with this sensible moderate advice.

When I asked Olsen if the House Republican plan to draft a new version of the 1994 Contract With America met that need, he responded as I would: Let's see what their ideas are.

The drafters have postponed the moment of truth by conducting a series of grass-roots hearings and soliciting ideas from the voters -- and, it turns out, in private sessions with Washington lobbyists.

Building a majority coalition will require a strong, sensible platform. And a clear separation from the kooks and cranks who sank both Bryan and Goldwater.

So the Tea Partiers need to be "sensible" and separate themselves from "kooks" and "cranks." This is great advice! I am sure the angry minorities of raging white populists who pop up to hysterically attack every Democratic president will listen carefully to Broder and his friend, and decide to stop advocating for the radical, revolutionary changes that are their animating causes. Once they learn that they must be sensible, these nativists, modern-day Birchers, conspiratorial cranks, and right-wing libertarians who are terrified of losing "their" country will get to join the grown-ups table with Mr. Broder.

All they really have to do is not be who they are!