Did LeBron get played?

Using game theory to understand the decision of Bosh, Wade and James to join forces in Miami 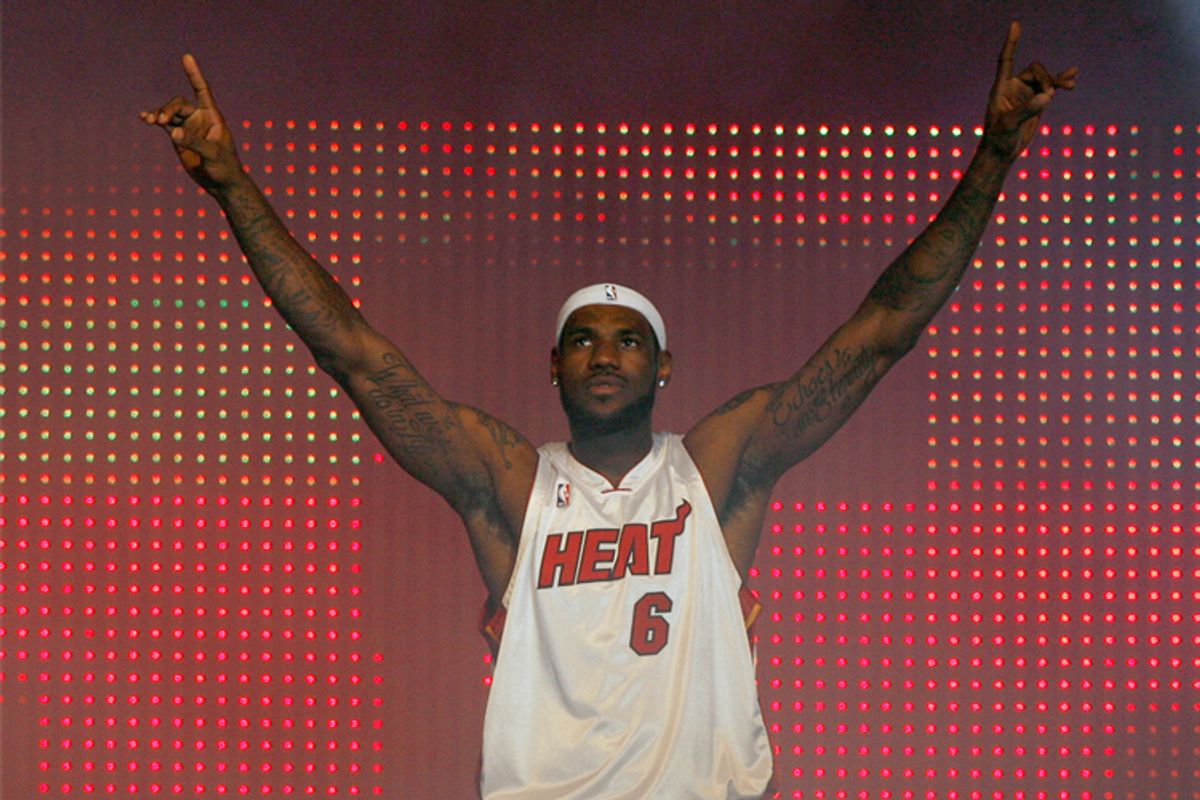 This originally appeared at The Monkey Cage:

We’ll probably never know what exactly went down between Dwayne Wade, Chris Bosh and LeBron James as they made their final decisions about where to play next year, but according to the media, it was certainly all LeBron all the time. But what about the other two, what kind of effect did they have on the outcome? This reminded me of something John Huber once said at a conference: that he liked formal modeling because it gave him a chance to understand interactions that he would never actually be able to observe. So with that in mind, consider my very modest attempt at asking what game theory might have to say about the end of the King James saga.

Consider a simple game with three players (no pun intended!) who all have to choose where to play basketball next year. They can each choose to stay in their own city or move to the city of another player. (So for the moment we leave out the option of them all going to New York or Chicago for simplicity’s sake, but I think the logic still holds fine if we expand the number of destinations.) The players get utility from the following four factors:

1. The money they are paid in salary.

2. The chance to win a championship.

3. The quality of life in the city in which you choose to live.

4. Not being perceived as a villain.

All three were going to get roughly the same salary no matter where they signed.

One gets perceived as a villain for abandoning one’s current team, but this “villain penalty” increases 1) if you originally grew up in the region of the team you are playing for, and 2) the more you say, "well, I might stay; I just don’t know." To put this another way, LeBron will pay the biggest "villain" penalty, and Bosh, who made no secret of his desire to get out of Toronto, will pay the lowest. (Note: For those who care about these sorts of things, we could also call this the A-Rod effect, who still gets booed in Seattle to this day.)

I’m also going to go out on a limb and assume the quality of life in Miami is higher than in Cleveland or Toronto for our young stars (and especially so for Wade and Bosh -- LeBron maybe a little less so because of friends and family in Cleveland).

OK, so where does this get us from the perspective of Wade? His top preference is to stay in Miami (no villain penalty, best quality of life) with Bosh and LeBron joining him (highest chance of winning championship). His decision gets more difficult as Bosh and LeBron go elsewhere, and especially if they go elsewhere together.

What about Bosh? He clearly revealed from statements leading up to the free agency period that he was willing to pay the "villain" penalty to gain the quality of life benefit of being somewhere else. So in our simple game, he too prefers Miami (higher quality of life than Cleveland, given he wants out of Toronto), and he prefers to be there with Wade and LeBron. Again, things get more difficult for him only when the "championship" option looks better elsewhere, especially if Wade and LeBron both go somewhere else together.

Which brings us to LeBron. He is going to be pay a heavy "villain penalty" for leaving Cleveland. If that penalty is sufficient enough to outweigh the benefit of living in Miami vs. Cleveland, then he would likely prefer to be in Cleveland with Bosh and Wade joining him there. (Plus, remember LeBron’s quality of life benefit from Miami is probably lower than that of the other two.) Indeed, he might prefer to stay in Cleveland even without Bosh and Wade, provided those two remain in separate cities. Where things become more difficult for him is if Bosh and Wade both go to the same place outside of Cleveland; in the probability of winning a championship this then makes the difference  between joining them (highest chance, all three in one place) and staying put (lowest chance: He’s in a different city and the other two are in the same city) the largest it could be, making the cost of staying in Cleveland the highest it could be.

So here’s the question: What do you do if you are Wade and Bosh and you want to achieve your most preferred outcome (i.e., all three in Miami)? Once LeBron makes his decision, you simply solve for the highest utility, balancing playing with LeBron vs. quality of life vs. the villain penalty. However, if you can make your decision before LeBron, then perhaps you can influence LeBron’s choice, especially if you have an idea how much LeBron values winning a championship.

Thus the optimal strategy for Bosh and Wade, I think, is for both to credibly commit to going to Miami before LeBron makes his decision. This puts the maximum possible pressure on LeBron to come to Miami. Now, all of a sudden, LeBron is making his decision with complete information: If he sufficiently values the chance to win a championship, he has to come to Miami also. Whereas if LeBron makes his decision first, he might choose to go to Cleveland on the expectation that there is at least some non-trivial chance that Wade and Bosh will join him there.

So this leads to the interesting question: By allowing Bosh and Wade to make their decisions first, did LeBron possibly get himself into a situation where he ended up with a suboptimal outcome? If so, it would certainly put that ESPN special in a whole new light: not just obnoxious, but possibly even counterproductive. By committing himself to a specific timetable -- and remember, the demands of the ESPN show called for absolute secrecy regarding his decision -- he gave Wade and Bosh a chance to both 1) move first and 2) have a little time to think through the strategic value of moving first. So, in the end, the need for the King to play to the public may have led to the King himself getting played -- surely not the first time in history this has happened!