The president's supporters expected big things and are feeling short-changed. Stop me if you've heard this before 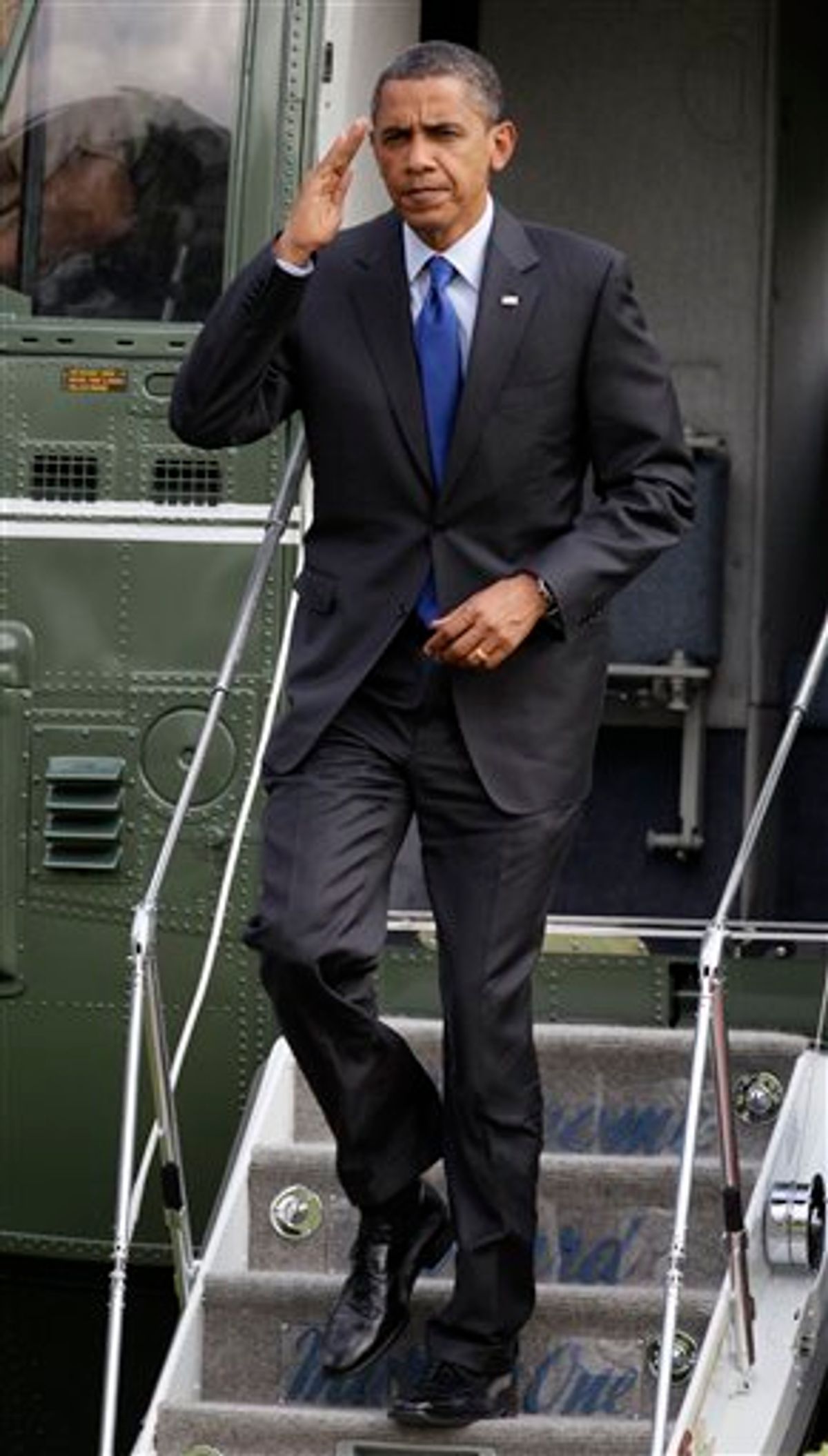 President Barack Obama salutes as he steps off of Marine One on the South Lawn of the White House in Washington, Saturday, July 10, 2010. (AP Photo/Carolyn Kaster) (AP)
--

Politico ran a piece over the weekend about the left’s "despair" over the direction of the Obama presidency.

The grievances are all familiar at this point: the stimulus wasn’t big enough, healthcare reform took too long and compromised away too much, we shouldn’t be in Afghanistan, and so on. The interesting question, to me at least, is what this all adds up to politically. How serious, in other words, is Obama’s problem with the Democratic Party base?

My sense is that it’s not actually that bad. This isn’t to diminish the disappointment (or even betrayal) that many of Obama’s most ardent 2008 supporters feel, or the legitimacy of their policy gripes. But when you consider other modern presidencies, the frustration that now grips the left is hardly atypical.

Five of Obama’s six immediate predecessors enjoyed at roughly this point in their presidencies what could fairly be described as serious tension with their party’s base. The lone exception was George W. Bush, who was shielded from meaningful intraparty dissent by 9/11, which came not quite eight months into his tenure. It wasn’t until Bush’s second term that the right became outwardly restive. (Although it should be noted that in the months before 9/11, John McCain rarely missed a chance to poke a stick in Bush’s eye.)

For three recent presidents, this tension ended up having a deleterious long-term impact: Gerald Ford, Jimmy Carter and George H.W. Bush. The good news for Obama is that their examples aren’t particularly analogous to his, because Ford, Carter and Bush all faced skeptical and even hostile bases from the start of their presidencies.

Ford’s story is a little different, of course, since he was never actually elected president (or vice president). He inherited the presidency in 1974 from Richard Nixon, who had rather devilishly finessed what was then a gaping ideological and cultural divide in the GOP, managing to corral both the establishment/Rockefeller wing and the ascendant (heavily Southern) ideological wing. In the ’72 GOP primaries, Nixon was challenged from both the left and the right, by Reps. Pete McCloskey and John Ashbrook. But he wasn’t really vulnerable on either flank and received more than 80 percent of the vote in all but one primary.

Ford, a pragmatic establishment figure, never had a prayer of pulling off this balancing act -- especially after he appointed Nelson Rockefeller, the right-wing’s bête noir, as his V.P. The New Right, its growth spurred by post-Civil Rights defections from Southern Democrats, was hungry to assert itself and lined up behind Ronald Reagan who entered the ’76 primaries against Ford. The lines were sharply drawn and Reagan essentially battled the president to a draw, but establishment forces had just enough juice to push Ford over the top at the convention.

Carter was also at odds with his party’s base from the start of his term. He had managed to win the ’76 Democratic nomination mainly by grasping the significance of that year’s radically expanded primary calendar (there were 30 Democratic contests overall). While Democratic powerbrokers split their loyalties among several candidates (or stood back to wait for the late emergence of Hubert Humphrey or Ted Kennedy), Carter competed in ever primary, notching at least one win on every Tuesday when there was a contest and building so much momentum that late establishment efforts to thwart him were futile.

It may be hard to believe today, given the activist tone of his post-presidency, but Carter governed as a moderate-to-conservative Democrat and never made peace with organized labor or the liberal interest group establishment. Early in Carter’s presidency, Kennedy began making noises about challenging him in 1980. Like Reagan and the New Right in ’76, Kennedy and the left were itching for a fight, eager to reclaim their party. The Kennedy challenge ended up failing. Popular history faults Kennedy’s stammering Roger Mudd interview for this, but the Iran hostage crisis – which temporarily boosted Carter’s standing in late 1979 and early ’80 (just as the primaries were beginning), may have been a bigger factor.

The story went the same for Bush, the old Yankee Republican who’d run as a pro-choice supply side skeptic in the ‘80 Republican primaries. As a gesture to the fading Rockefeller wing, Reagan put Bush on the GOP ticket in the fall. As vice president, he then labored for eight years to recast himself as a Reagan adherent on all of the right’s litmus test issues.

It was enough to win Bush the GOP nod and the White House in ’88, but when he went back on his “Read my lips” pledge and raised taxes in 1990, the right-wing revolted. Their outrage was temporarily muted by the 1991 Gulf War, but as the glow of triumph faded and 1992 approached, Pat Buchanan decided to challenge Bush for the nomination. Buchanan started late and was a very imperfect vessel, but he won nearly 40 percent in New Hampshire primary, a showing that humbled Bush and vividly illustrated that extent of his vulnerability.

As I noted above, the common thread in these examples is that Ford, Carter and Bush were all distrusted by their party’s bases before they came to office. The GOP base with Ford and Bush and the Democratic base with Carter had little to no built-in loyalty.

The story is different with the other two recent presidents to encounter early problems with their base. Both Bill Clinton and Ronald Reagan came to office with more stable relationships with their bases -- Reagan because he was the embodiment of the GOP base and Clinton because of his knack for straddling his party’s fault lines. For different reasons, both of their examples are more analogous to Obama’s.

On paper, Reagan offers the best parallel. Just like Reagan in 1980 (and 1976), Obama in 2008 was fundamentally the candidate of his party’s base, with a passionate (and vast) network of anti-establishment backers propelling him to the nomination.

The Reagan presidency began with great expectations on the right -- expectations that, two years into his tenure, had given way to considerable frustration and angst. Conservative ire with Reagan was similar in nature to today’s liberal frustration with Obama: He compromised too willingly, listened too closely to pragmatic Washington hands (like his chief of staff, Jim Baker), and was intimidated by the political risks of pursuing his base’s wish list.

Sure, he pushed a massive tax cut program through Congress in 1981. But at the time, this was off-set -- in the right’s eyes -- by his the acceleration of a payroll tax hike to preserve Social Security and his acquiescence to a gas tax increase to fund infrastructure. When he irked the Pentagon by scaling back his defense spending request in 1982, hawks openly challenged his commitment to their cause. As budget deficits soared to unprecedented heights, conservatives wondered why their president showed no desire to fight for the elimination of Cabinet departments (like Education and Energy) and the reduction of costly (but politically-popular) social welfare programs. And whatever happened to the moral crusade -- against abortion and pornography and for school prayer -- that candidate Reagan had seemed so eager to lead?

This was hardly the revolutionary presidency that conservatives had dreamed of during the 1980 campaign. And – especially after the G.O.P. was gut-punched in the 1982 midterm elections -- they began to express themselves. In January 1983, three of the architects of the New Right’s rise -- Richard Viguerie, Paul Weyrich and Howard Phillips -- even called for a challenge to Reagan from the right in the 1984 Republican primaries.

"There is no way in which conservatives are going to get elected in 1984 running on a record of the biggest tax increases and the biggest deficits in the history of the country," said Phillips. A conservative challenger, Viguerie argued, would simply run on Reagan’s own 1980 message -- "In other words, reduce taxes, balance the budget, stop busing, bring school prayer back, you name it."

The movement died out by the summer of 1983, for one simple reason: the economy began its comeback. Republicans rallied back to Reagan, independent voters followed, a 49-state landslide ensued, and Reagan went on to assume his exalted status within the G.O.P. What the right called betrayal back in 1982 today looks like fine print.

It’s not hard to see a parallel to Obama, whose first two years are not without their achievements. Today, liberals argue that the stimulus, healthcare, and financial reform packages were all too watered down. But a generation from now?

The Clinton comparison isn’t as neat, since Clinton wasn’t as beloved by the Democratic base when he was elected in 1992. But he was still popular with the base, especially when you consider the centrist credentials he’d built up in preparation for that race. Even as he planted himself in the middle of the political spectrum, Clinton retained an uncanny ability to connect with his party’s core constituency groups -- African-Americans in particular. It also helped that his principal opponent in the ’92 primaries ended up being Paul Tsongas, who promised to run a devotedly pro-Wall Street White House. By necessity, Clinton ran hard to Tsongas’ left, thereby boosting his reputation with the left (before lurching back to the center for the fall campaign).

As president, Clinton’s relationship with the Democratic base was complicated. They appreciated his bottom-line insistence on universal healthcare coverage even as they were appalled by his championing of NAFTA. The party’s wipeout in the 1994 midterms made him vulnerable to a primary challenge in 1996, more because of his overall weakness. But Newt Gingrich’s Republican Congress gave Clinton an opportunity in 1995 to position himself as the defender-in-chief of the social safety net and to rally the base. Thus, he avoided a primary challenge and coasted to the nomination in 1996. (His firm grip on the Democratic nomination made it much easier for Clinton to sign welfare reform in the summer of 1996.)

An Obama-Clinton comparison is inexact, obviously – mainly because the Democratic base expected (and expects) more from Obama than it ever did from Clinton. But like Clinton, Obama could well face a Republican Congress in the second two years of his first term -- a possibility that White House spokesman Robert Gibbs even admitted on Sunday. If this happens, there will be undoubtedly be grumbling on the left that it’s Obama’s fault -- that his timid, compromising style was the cause. But fighting off the GOP Congress could also unite the left behind Obama, as it did for Clinton.

Every president, it seems, is bound to disappoint his party’s base. But when that base is cheering for (and invested in) the president for the start, it’s a lot less likely that the damage will be permanent.