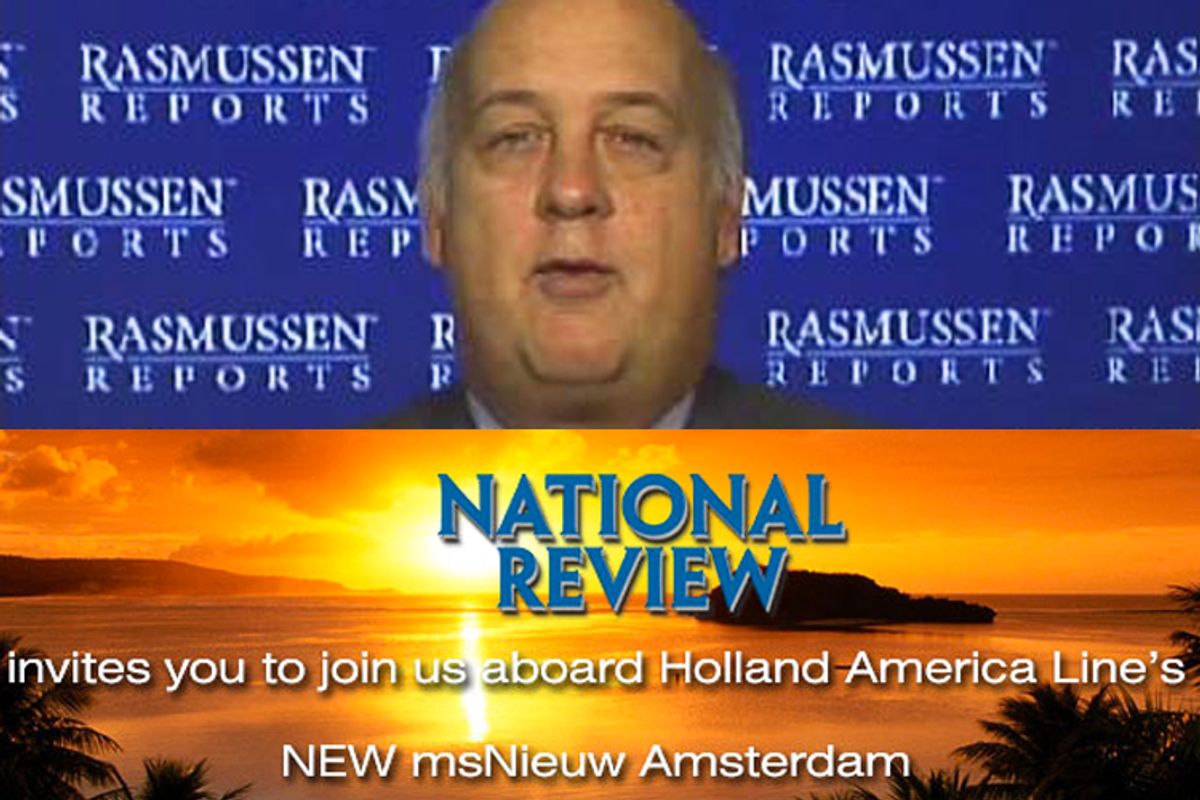 [UPDATED] Pollster Scott Rasmussen, who maintains he is reliable and independent despite criticism from Democrats that he tilts to the right, will in November speak for no fee on a post-election National Review cruise to raise money for the conservative magazine.

Besides Rasmussen, the week-long cruise features an impressive lineup of conservative operatives, journalists and academics -- Karl Rove, Andrew Breitbart, Phyllis Schlafly and Jonah Golderg, to name just a few -- and will sail around the Caribbean stopping at ports in the Bahamas, Grand Cayman and Cozumel, Mexico.

National Review publisher Jack Fowler told Salon today that Rasmussen, like the other speakers, is not being paid; he added that speakers do not themselves pay to go on the cruise. Fowler said that the cruise, which has been held since the mid-1990s, is a money-maker for the conservative magazine.

"He's on Fox often -- you can imagine a National Review reader, if they're watching cable news, odds are they're probably watching Fox," says Fowler. "I've seen him on Fox several times, I think he's very informative. Very intelligent people come on our cruise and I think they would appreciate hearing from a pollster as much as they would appreciate hearing from Karl Rove."

But Rasmussen differs from the other 25 or so speakers who are all professional conservatives -- open about their political leanings. Democrats have criticized Rasmussen's apparent tendency to produce results that are unusually favorable to the GOP. Rasmussen has dismissed these complaints and his bio stresses he has "been an independent public opinion pollster since 1994." Rasmussen Reports' website promises the firm "highly values its independence and credibility."

When Democrats in Wisconsin were unhappy last month with a Rasmussen poll showing a tight race between Sen. Russ Feingold, D-Wis., and a GOP challenger, they raised the fact that Rasmussen is going on the National Review cruise. But as the firm has done before, Rasmussen Reports dismissed the criticism as yet another case of Democrats "attack[ing] the messenger."

Rasmussen spokeswoman Debra Falk told the Milwaukee Journal-Sentinel on June 24: "Regarding his upcoming speaking engagement, many organizations hire Scott Rasmussen to provide high-quality independent analysis and perspective. The upcoming National Review event just happens to be in a unique venue."

But in fact, Rasmussen was not "hired" by National Review. Asked about this today, Falk told Salon she wasn't involved in scheduling the cruise. "He does do hired speaking events. I don't know whether that reference is for this specific event," she said, referring to her June 24 quote.

She later followed up to say that there will be "some level of compensation" for Rasmussen's participation in the cruise. She didn't specify whether this refers to the free cruise that Fowler said all featured guests receive. (UPDATE: Falk e-mails to confirm that the cruise for Rasmussen and his wife is the compensation.)

Falk said Rasmussen himself was in meetings and not immediately available for comment. It's also worth noting that Rasmussen is a regular on the paid speaking circuit. He is represented by the bureau Premiere Speakers (which lists Sean Hannity as a "similar speaker" on its profile page for Rasmussen). But National Review's Fowler says that he did not go through the speaking bureau to book Rasmussen, whom he adds he has never met.