Near misses and close calls in the air

With more planes flying than ever before, the number of incidents has risen. Should nervous passengers be worried? 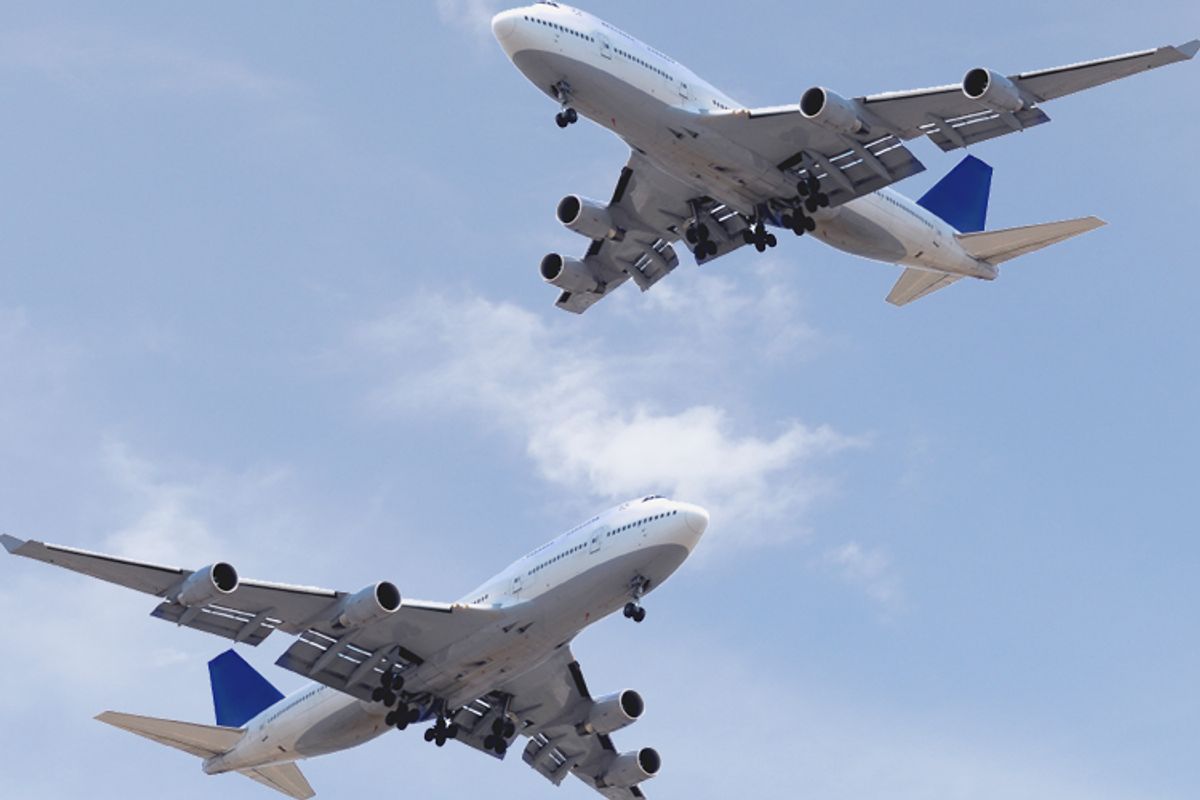 Not to scare anybody, but the number of near collisions between commercial aircraft is going up.

In the past year, according to the Federal Aviation Administration, the rate of what it considers "serious" airspace incursions in the United States rose from 2.44 per million flights to 3.28 per million flights. That works out to fewer than 10 incidents per year, but still the trend is a worrying one, especially as the number of lesser infractions has risen more sharply.

The news isn't entirely surprising. There are more planes flying than ever before, overseen by an air traffic control infrastructure that has not kept pace. And regional jets, which tend to fly short-haul routes at lower altitudes, in and out of busy hubs, now account for half of all commercial traffic. The terminal area -- airspace in and around airports, where collisions are most likely to occur -- has never been busier.

Pilot and controller organizations, together with the FAA, are taking this uptick very seriously. As they should. In the meantime, nervous fliers should be wary of alarmist media coverage.

In an Associated Press story making the rounds, reporter Joan Lowy writes, "In some cases, pilots made last-second changes in direction after cockpit alarms went off to warn of an impending crash."

The alarm she's referring to is part of a cockpit safety device called TCAS -- Traffic Collision Avoidance System, pronounced "Tea-Cass." Linked to the plane's transponder, TCAS gives pilots a graphic, on-screen representation of surrounding aircraft. If certain thresholds of distance and altitudes are crossed, it will issue progressively ominous oral and visual commands.

Personally I find TCAS to be needlessly complicated and over-engineered, but most important, it works. If two aircraft continue flying toward each other, their TCAS units work together, vocalizing a loudly imperative "Climb!" instruction to one, and "Descend!" to the other.

When the AP says "last-second," that's not to be taken literally in most cases. Response times vary. And "impending crash"? Probably not. The alarm is designed to prevent a near miss, not  respond to one.

In 1978 a Pacific Southwest Airlines 727 collided with a Cessna while preparing to land at San Diego. In 1986 an Aeromexico DC-9 plunged into a Los Angeles suburb after hitting a Piper that had strayed, sans permission, into restricted airspace. Ten years later, a Saudi Arabian 747 was struck by a Kazakh cargo jet over northern India. Tragedies all, but these accidents occurred when TCAS was not yet standard equipment, and when ATC protocols were not as sharp at they are today. Through technology and training, the threat of midair collisions has been greatly reduced.

But for everything to work as it should requires the cooperation of both human and technological elements, bringing to mind the 2002 midair collision between a DHL freighter and a Bashkirian Airlines Tu-154 over the border between Switzerland and Germany.

An ATC error had put the two planes on a conflicting course. A Swiss controller eventually noticed the conflict and issued a command for the Bashkirian crew to descend. At the same time, both airliners' TCAS systems correctly interpreted the hazard, issuing their own instructions in the final seconds. TCAS told DHL to descend, and Bashkirian to climb. DHL did as instructed and began to lose altitude. The Bashkirian crew, however, disregarded the TCAS order to climb, and chose instead to descend, in compliance with the controllers' original request. Suddenly, both planes were descending and were still on a collision course.

Standard procedure is that a TCAS command, being the last word on an impending collision, overrides any previous instruction from ATC. Had the TCAS alarm been obeyed, the jets would have been sent on safely divergent vectors. Alas it wasn't and they struck each other, killing 71 people.

An even worse catastrophe happened over the Amazon in 2006. A Boeing 737 collided with an executive jet. The latter managed a safe emergency landing, but the Boeing plunged into the forest killing everybody on the plane. The investigation revealed a chain of procedural mistakes made by Brazilian controllers, compounded by the possibility that the executive jet's TCAS unit had been switched off inadvertently.

But what of dangers here in the U.S., home to the world's most crowded airspace? Isn't our ATC outmoded and much of its equipment obsolete? Aren't improvements badly needed?

To some extent, yes, though bear in mind that a call for change is not to imply a situation rife with danger. The fallout from past accidents helped usher in valuable enhancements that have saved many lives. Overall our accident record is an excellent one, and a testament to the reliability of our ATC system, clunky and maligned as it is. It can and should be better, but dangerous it's not.

Have I ever been involved in a near miss/close call in a plane I was flying? Only once -- which is more than most pilots can say -- as a private pilot, operating under what's known as visual flight rules (VFR). That story, which some of you have seen previously, is here.