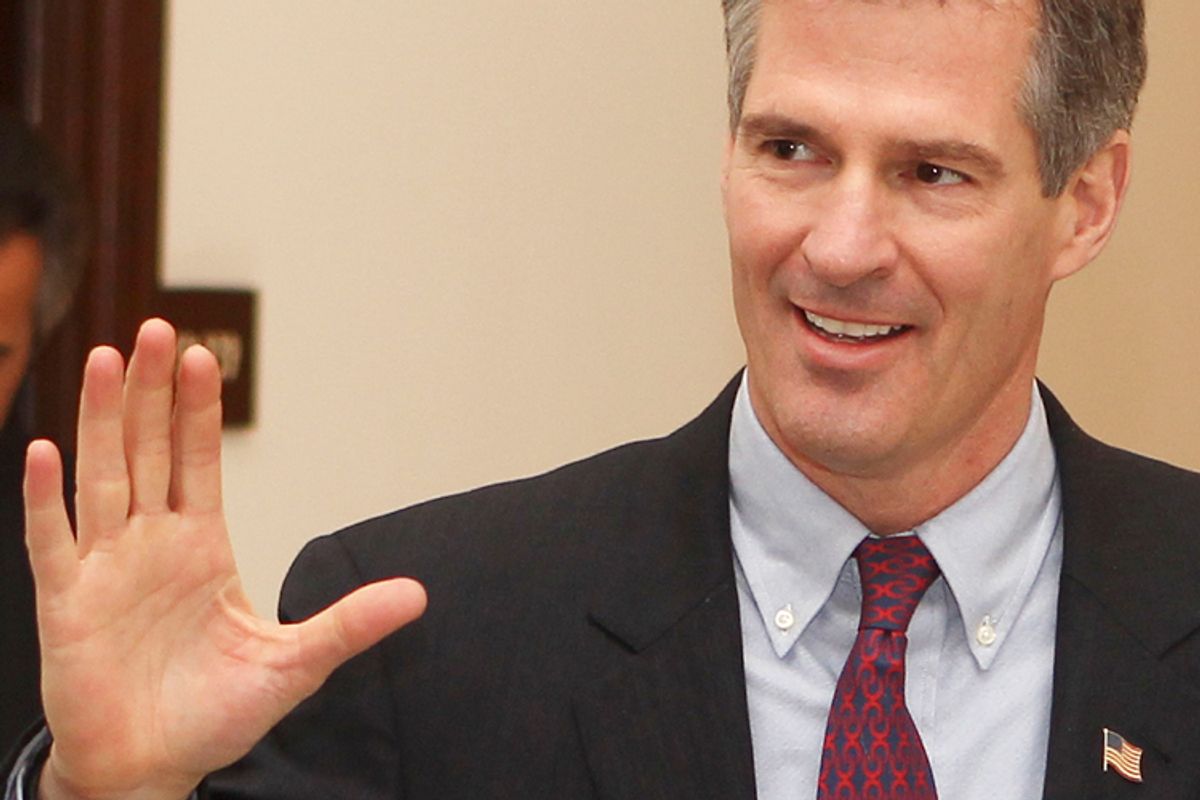 It's not exactly shocking that Scott Brown has come around (again) on financial reform and is now ready to provide potentially decisive support to the package pending in the Senate.

In the immediate aftermath of his stunning special election victory in January, there was uncertainty over what direction the Massachusetts Republican would take in the Senate. Would he play to the national Tea Party base, figuring that it would give him a future on the national stage even if he failed to win a full term in 2012? Or would he break with his party on high-profile issues to forge the kind of independent image that Republicans need to win in the Bay State?

But he answered the questions almost immediately, by supporting Harry Reid's jobs bill and incurring the wrath of national GOP activists. With that, Brown's seriousness about winning a full term became clear, and in that context, his financial reform maneuverings aren't that surprising.

What is worth considering, though, is whether his political strategy is working. The short answer is: yes.

A well-publicized Boston Globe poll two weeks ago gave Brown a 55-18 percent favorable rating in Massachusetts -- better than the 52-37 score that John Kerry enjoys. There are a few reasons for this. One is that Massachusetts voters simply like Brown personally.

Another is that (with the sort-of exception of gubernatorial candidate Charlie Baker) he's the only visible Republican in the state. And being a Republican in Massachusetts is less toxic now than at any time since the days leading up to the GOP takeover of Congress in 1994. (For an explanation, see this post.) In fact, the GOP label can actually be helpful in Massachusetts right now, with voters looking for a vehicle to express their frustrations with the Democrats who control Beacon Hill, Capitol Hill and the White House.

This is where Brown's current strategy comes into play. By separating himself from the bulk of his party in the Senate on some key issues, he's generated headlines that indicate to most voters back home that he's not a Jim DeMint clone. Thus, the (considerable) chunk of Bay State voters who aren't thrilled with the Obama administration but who remain wary of the ideologues who dominate the national GOP feel safe in lining up with Brown.

This bodes well, obviously, for Brown's chances in '12. If he maintains this popularity, it's doubtful that any of the state's Democratic House members will challenge him, since they'd have to give up their seats to do so.  And it would be even more unlikely that Joe Kennedy, who has passed on multiple chances to run statewide since giving up his House seat in 1996, would jump in -- even though state Democrats expect there will inevitably be a high-pressure campaign to recruit him into the race (a campaign that Kennedy will probably let stretch out for a while before saying no).

Another complicating factor is this year's gubernatorial race. Democratic incumbent Deval Patrick is clearly vulnerable, though he's shown resiliency in recent polling that has surprised some observers. If Patrick loses to Baker, the 2014 governor's race may start to look more attractive to ambitious Democrats than a campaign against Brown in '12. (And even if Patrick wins, it's possible the '14 governor's race will be wide open, since he might not seek a third consecutive term -- something that no Massachusetts governor has tried to do since Leverett Saltonstall in 1942, back when gubernatorial terms were only two years.)

Some Massachusetts Democrats point to former Rep. Marty Meehan as the most likely Brown challenger in '12. Meehan gave up his House seat in 2007 (to become chancellor of University of Massachusetts-Lowell) in part because he didn't see any statewide openings on the horizon. Meehan then passed on the recent special Senate election in part because he'd just started his university gig. But in '12, he might have a clear field on the Democratic side -- and a chance to run with a (presumably) more popular President Obama in the fall. Plus, his old campaign war chest remains flush, with around $5 million in cash.

The biggest threat to Brown could come from this November's elections. If the GOP were to somehow take over both houses of Congress (a long shot, but not impossible), it could return the GOP to the pariah status it enjoyed in Massachusetts throughout the Gingrich/Bush years, complicating Brown's reelection prospects.