Was the decision to abandon Cleveland motivated by a growing Chinese market for Nike shoes? 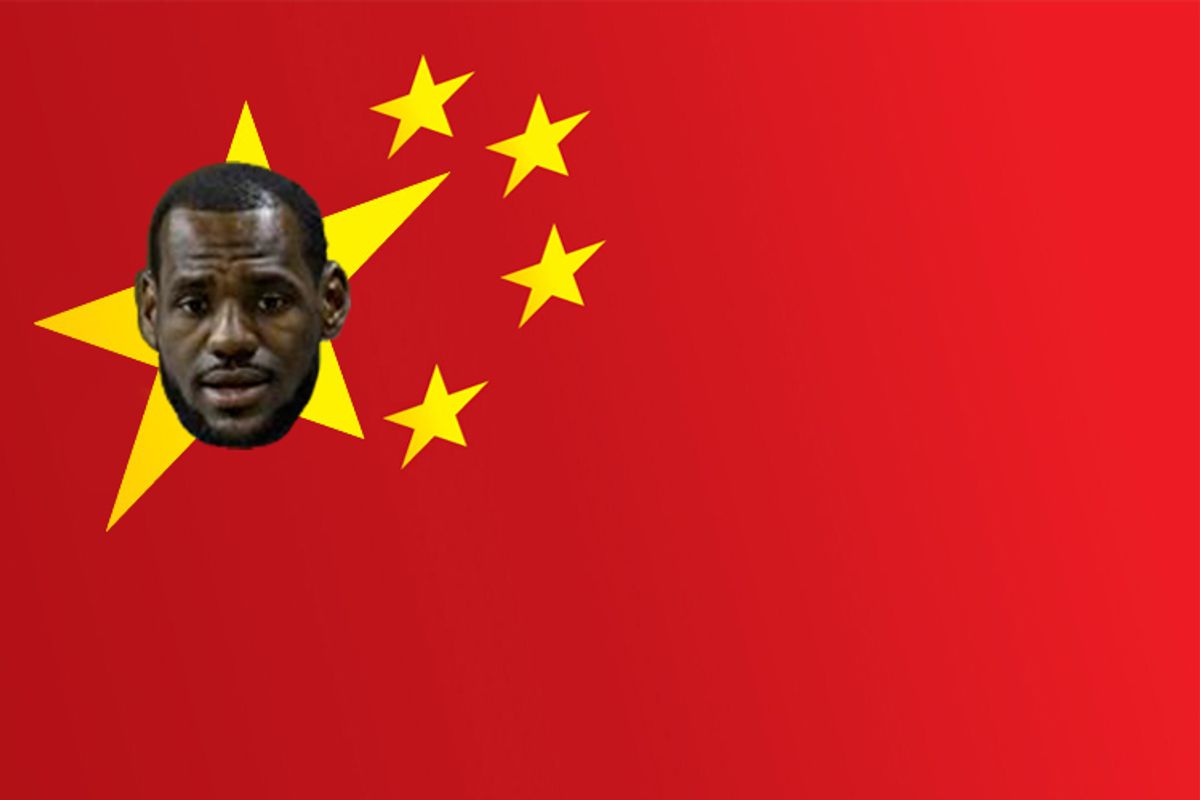 "LeBron James gets China," writes Jack Perkowski at Forbes.com. His evidence for this: SportsGrid.Net (a site founded by former MSNBC General Manager Dan Abrams), arguing that the lucrative potential for the China market is the real reason the 25-year-old superstar forsook Cleveland for Miami.

There is definitely a connection between LeBron James and China. James is a Nike athlete, and Nike is making serious money in the "Greater China area" -- pulling in $464 million in revenue in the recently concluded fourth quarter. (That's almost ten percent of Nike's overall $5.1 billion fourth quarter haul.) Nike has targeted China with LeBron-branded region-specific basketball shoes for years.

But according to SportsGrid, in China, Laker superstar Kobe Bryant is stomping all over LeBron James in the symbol-significant realm of jersey sales.

According to [CNBCs Darren] Rovell Kobe's popularity is "at least two times bigger" than LeBron in China, a fact that has caused Kobe's jersey to continue to be the number one selling jersey in China.

And the reason for this is:

[A]ccording to Terry Rhodes, owner of a marketing firm in Shanghai, the Chinese are attracted only to champions -- a category that (as has been widely harped on, particularly after the Cavaliers' loss to the Celtics this year) LeBron is yet to fall under. On this note, Rhodes offers a suggestion: "For LeBron and Team LeBron, the ultimate objective has to be get those rings onto LeBron's fingers, and then, the rest of the opportunities in China really can become available."

It's not clear to me that the Chinese only root for champions. You could just as easily argue that the Chinese respect loyalty and consistency -- Kobe Bryant has been with one team his whole career. But in general, I think this line of argument gets the chain of cause and effect backwards. The Cleveland Plain Dealer's Brian Windhorst, who has done some of the very best ongoing reporting on the entire absurd LeBron James free agency circus, makes a pretty convincing case that LeBron James, former Toronto Raptors star Chris Bosh, and Miami Heat's Dwyane Wade have been talking about playing together for years, and with some strong encouragement from the Miami Heat organization finally brought their plan to fruition. They want to win championships, of course, and they all want to maximize their endorsement opportunities and push as much branded product as they can, but it strains credulity to think that the possibilities inherent in the China market were the clincher for these newly dubbed Yankees of basketball. The goal is to win the championship -- everything falls into place after that.

Nike's China market is growing, a tribute to years of hard work and toil. That fact alone is much more important than whether LeBron "gets" China, or not. The fact that upper-middle class Chinese are willing to spend cash on LeBron-branded shoes is exactly the kind of proof of potential for domestically-generated consumer demand that the entire rest of the world wants to see coming from China.

In that scenario, it doesn't matter at all where LeBron James chose to go, or whether he every wins another championship, or whether his "brand" is permanently destroyed by the egomania of his one-hour ESPN television special "The Decision." Someone will win championships, and will sell a lot of branded gear to Chinese who seem desperate to prove that they can be just as fetishistic about pop stars and professional athletes as any American. I'm not sure whether to call this progress, but hey, if it reduces the bilateral trade deficit with China, I'm all for it.