Bill tattles on a superior, Eric's big secret comes out, and Sookie hangs out with a shirtless werewolf 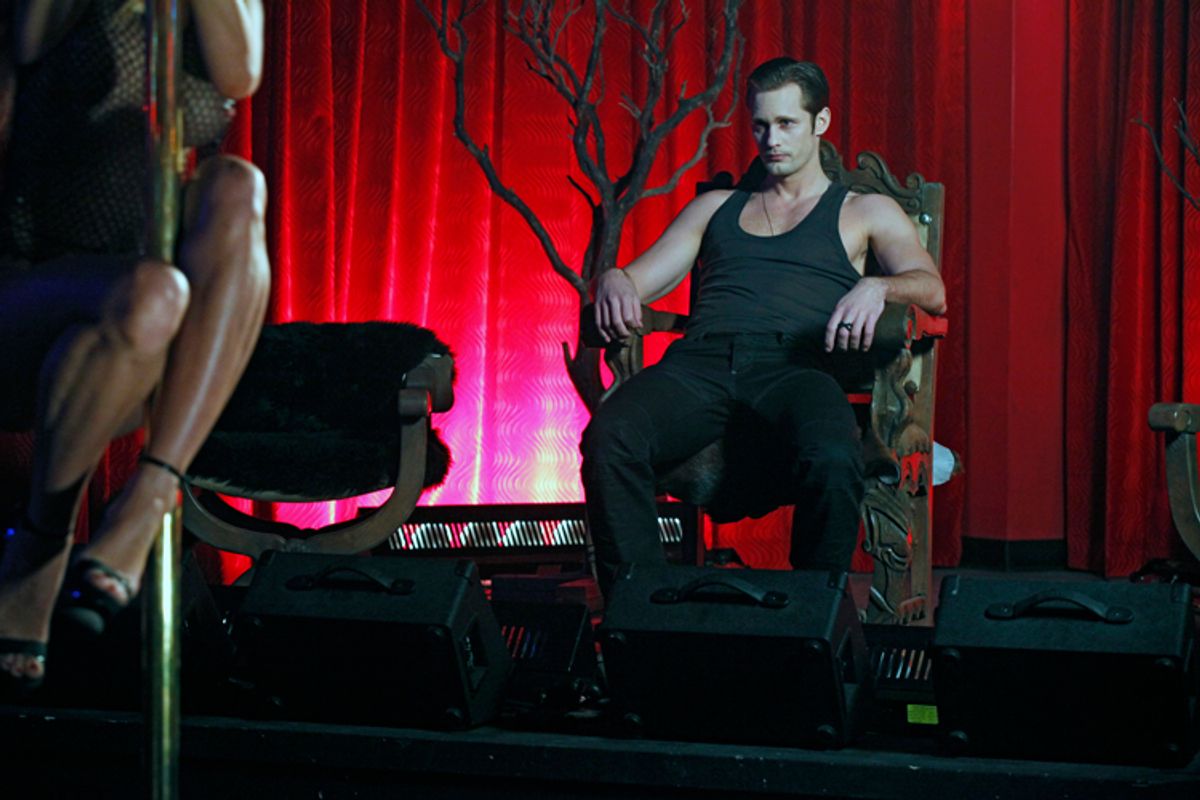 Often "True Blood" starts right where it left off, whether it be the shooting of a zombie boyfriend, or smack in the middle of a werewolf attack. But after a two-week hiatus, it's probably a wise decision not to launch right into the afterglow of Bill and Lorena's disturbing sexual reunion.

Instead the show starts on a tender note, with Sookie ministering to Alcide's wounds, sustained while defending her at Lou Pine's. But tenderness never lasts long on "True Blood." Ring. Ring. Phone call from Bill, just wanting to let Sookie know that she is "no longer of concern" to him and that he and Lorena have just "fucked like only two vampires can." Oh, so, that's what that was.

Sookie is heartbroken, although my sympathy for her is not what it could be. I remember someone once broke up with me on the phone, but I'm pretty sure that there wasn't a shirtless guy who looked like a hotter version of Sydney Crosby sitting in the room with me at the time. (Don't worry I'm not going to start calling Alcide the Were-Penguin. I'm still having enough fun with the Were-Swayze.)

Cute as he is, however, Alcide strikes me as a tad self-absorbed. He launches in to some blah, blah, blah about how "no matter how well you think you know somebody, they still turn around and kick you right in the nut sack." Sookie tremulously points out that she doesn't have a nut sack. Alcide puts his arm around her, and Sookie notices that he's "so warm!"  Alcide says this is a were thing. "We run hot." Sookie shoots Alcide a distinctly pleading look. But Alcide decides to put his shirt on. Seems he's still a little protective of his nut sack.

Back in Bon Temps, Sam discovers that the Mickens are sleeping in their van in the parking lot of Merlotte's, and that Tommy broke into his safe. Joe Lee is sympathetic in that special fatherly way of his ("That boy makes my ass itch!").

Franklin is also a disappointment. At first I thought he was going to bring a kind of cool Martin Amis ennui to balance out all the white trash wackiness. But so far he's just looking more and more dissolute, like an older version of Pete Doherty (although there would be worst names for a band than BabyVampireShambles) and it's bad enough glamming Tara and then tying her up. But making her sit on the toilet for hours, without the lid down?!  That's not the kind of thing you can just make better with flowers.

And I bet he doesn't smell like "the ocean in winter," the way Eric does!  Oh wait, this is just Eric dreaming of himself smelling like the ocean in winter, while a fantasy Sookie makes love to him. Eric, get your mind back in the game!  Lafayette needs you over at the meth maker's house where they are trashing that exquisite new car you bought him. Laf has so many charms. It is my goal this week to find a way to say "ring, ring, hooker, ring, ring" on someone's voicemail. And I would love to have even half his knack with a headscarf. But as flaming gay HBO gangster types go, let's face it, he's no Omar from "The Wire."

Sookie decides to get Alcide to take her to Debbie's engagement party at Lou Pine's hoping to find more info on Bill's whereabouts. Alcide's sister, Janice, gives Sookie a makeover so this time she won't be so obviously out of place. This is disorienting, because something about Anna Paquin in a tight leather outfit makes me think Hugh Jackman should to be there too. But while it would be awesome to see Wolverine flash his retracting bone claws at the Were-Swayze, this would be confusing.

Though not as confusing as what Jason is up to over at Merlotte's. First, he defends Andy's honor against the obnoxious new Bon Temps QB, Kitch Maynard (no relation I hope to the Maenad) using only the power of his inability to make any sense. "One day, ten years from now, you'll be looking at a ten year younger version of yourself," he warns Kitch "…and then who will you be?" But after defending his mentor, Jason turns around and blackmails Andy, using the fact of Andy taking the blame for Jason's shooting of Eggs to force Andy into giving Jason a job as a cop. There is at least no confusion about what Jason is. A tool.

Bill betrays Queen Sophie Anne by telling Russell that she's been dealing V to solve some of her problems with the IRS. In exchange for his help taking over the kingdom of Louisianna, Bill wants Russell to kill Lorena. In the meantime Bill agrees to procure them some take out. Lorena wants something "smokey and not too fatty," but Russell wants something "ethnic." Bill decides to pick up something without a husband or children.

The Magister discovers that Eric is dealing V. Pam and Eric lie to shield Sophie Anne by claiming it's Bill who's been in charge. The Magister decides to hold Pam hostage while Eric finds Bill, stretching Pam out on that revolving rack type thing Eric has in the basement. I hate seeing Pam tortured, though I suspect this is still more comfortable than the lidless toilet seat Tara had to sit on all day.

Alcide and Sookie go to Lou Pine's where they meet up with the infamous Debbie Pelt. Tragically she has become a V addict and this seems to be some big were-bang initiation rite. But guess who shows up briefly before dinner to officiate! Russell, who graciously opens up a vein to give everyone a shot of V while music that sounds like the Vienna Boys Choir plays in the background. So classy. Debbie Pelt being hauled up on stage in purple underwear, not so much. And then they brand her and everyone starts turning into wolves, and I realize the only really disturbing thing we haven't seen on this show yet, bestiality. Man, I really hope this is not where they'll be starting next week.

The title of this episode is 9 Crimes, but I could only come up with eight: stealing, kidnapping, V dealing, property damage, tax evasion, extortion, torture and murder. I'm going to have to leave it up to you guys to figure out the 9th. Unless we can count looking too good while smelling like the ocean in winter.