In defense of the burqa ban 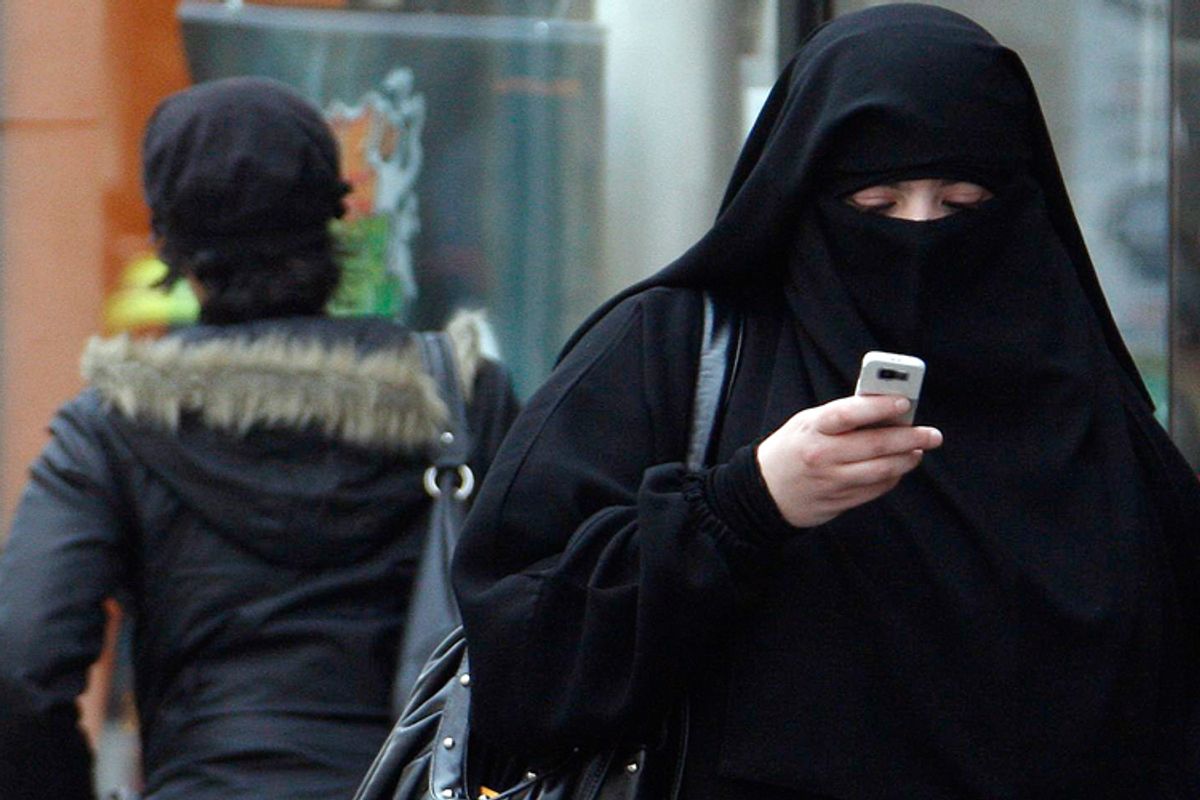 A woman wears a burqa as she walks on a street in Saint-Denis, near Paris, in April.
--

This week, French lawmakers are expected to vote on a proposed law that would criminalize the burqa, bringing to a head more than a year of heated debate over the conservative Islamic veil in contemporary France. Although the full head and body covering is worn by fewer than 2,000 of the country's 3.5 million Muslims, the movement to ban it has touched off a volatile discussion about issues of immigration, integration and the rights of women. Nonetheless, a recent poll showed that eight in 10 people in France support slapping a ban on the veil.

On this side of the Atlantic, however, conversations about European burqa bans have fractured more predictably along political lines. You would be hard pressed to find an American feminist clamoring to see the burqa outlawed, and that perspective has certainly been absent from Broadsheet -- until now. Ahead of parliament's vote on Tuesday, we went to Mona Eltahawy, an Egyptian-born journalist who calls herself "a liberal, a Muslim and a feminist," to better understand the argument for a ban.

Why do you support a ban on the burqa in France?

I support banning the burqa because I believe it equates piety with the disappearance of women. The closer you are to God, the less I see of you -- and I find that idea extremely dangerous. It comes from an ideology that basically wants to hide women away. What really strikes me is that a lot of people say that they support a woman's right to choose to wear a burqa because it's her natural right. But I often tell them that what they're doing is supporting an ideology that does not believe in a woman's right to do anything. We're talking about women who cannot travel alone, cannot drive, cannot even go into a hospital without a man with them. And yet there is basically one right that we are fighting for these women to have, and that is the right to cover their faces. To tell you the truth, I'm really outraged that people get into these huge fights and say that as a feminist you must support a women's right to do this, because it's basically the only kind of "right" that this ideology wants to give women. Otherwise they get nothing.

It seems that if you tried to ban something like the burqa in the United States, you'd immediately have people screaming that it was a huge violation of personal freedom. What makes the European context different?

To be really crude about it, in the United States, if you do anything and say that it's because it's my religious belief, there is some kind of hallowed ground that you cannot touch, because everybody must be able to do what they want in religion. And to make an equally crude generalization of what happens in Europe, they spent some 500 years fighting over religion and trying to get rid of the church in their lives, so the last thing they want is to justify anything in terms of religion. So it's the opposite obsession almost -- to keep religion out of everything.

But what really disturbs me about the European context is that the ban is driven almost solely by xenophobic right wingers who I know very well don't give a toss about women's rights. What they're doing is they're hijacking an issue that they know is very emotive and very easy to sell to Europeans who are scared about immigration, Europeans who are scared about the economy, Europeans who don't understand people who look and sound different than them. They've taken advantage of this and done it very well. I'm very disappointed with the left wing and liberals in Europe for not speaking up and saying, the burqa ban has everything to do with women's rights. We are fighting against an ideology that does not believe in women's rights, and we will not allow the right wing to hijack this issue for their own purposes.

It seems like another group we rarely hear from in this debate is the women who actually wear the burqa.

These women will tell you that they see this as the true Islam. And my response to that would be, who told you that's how our religion wants you to look? Because if you look around, the majority of Muslims in the world do not look like this. I have met Muslim women who have a very elaborate explanation for why they wear the burqa -- they say that women are candy or diamond rings or precious stones who have to be hidden away in order to appreciate their worth. And I'm appalled! We should talk about this because if we're really going to discuss this as feminists, is that something a feminist should be defending? That a woman is a piece of candy?

Do you think that banning the burqa will actually do anything, practically speaking, to help Muslim women from very conservative communities?

What I hope it will do is that it will create a situation where a woman can say to a man, look, you know that I have to go out and work so that we can continue to live here, and I can't go out with my face covered, even though you want me to, because that's what the law says. I hope the law gives women this kind of out. I have no idea if that's actually going to happen or not.