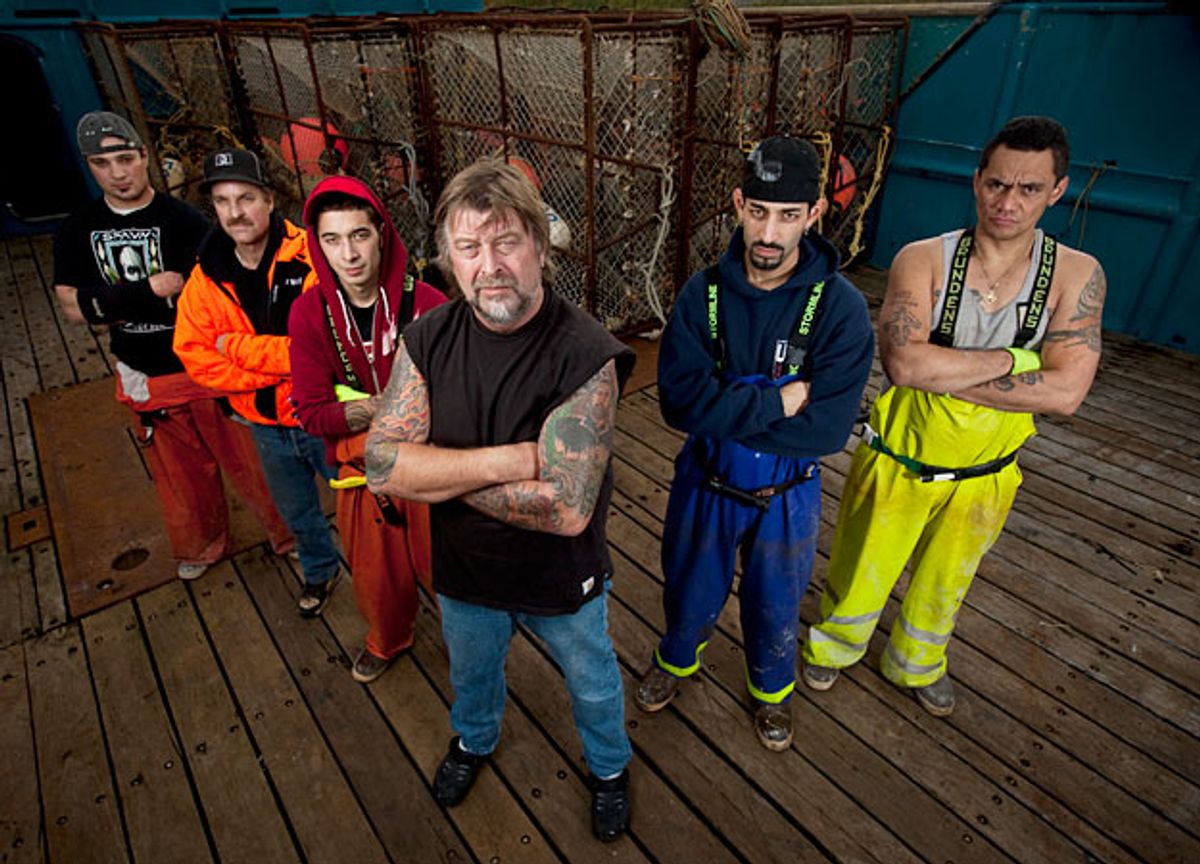 "I'm not gonna be here for very much longer," said Phil Harris, the hard-living captain of the crab fishing vessel Corneila Marie in a recent episode of Discovery Channel's unscripted series "Deadliest Catch." "That's a fact. I smoke and I drink. I've done every drug known to man. I mean, hell -- it catches up to you."

It caught up to Capt. Phil in January, when he suffered a stroke not long after the above statement was recorded. The show's producers were thrown into a quandary. "Deadliest Catch" is known for its commitment to  reality -- in the documentary sense of the word, as opposed to the corrupt facsimile associated with the so-called "reality TV," a genre consisting mainly of glorified game shows and deranged sociological experiments. But catastrophe and suffering are innately cinematic. Even a sensitive documentarian might look at the "Deadliest Catch" camera crew's post-stroke footage and think, "This is a motherlode," then set about repackaging pain as entertainment. The task was daunting: In a genre that has captured endless humiliation, violence and other human suffering, here was reality TV's first death.

Remarkably, "Deadliest Catch" handles the captain's passing, which culminates in tonight's finale (9 p.m. on Discovery), with intelligence and taste. During this season, with the consent of Harris' family, the cameras kept rolling as the Coast Guard flew the captain to a hospital. They caught his sons (and fellow boatmates) Josh and Jake fretting over whether to cut the fishing season short or sail on. They showed doctors trying to relieve pressure on his brain by removing a piece of his skull, and his family and crewmates coping in the aftermath. At no point did the series succumb to dumb voyeurism. We've seen little trace of the P.T. Barnum mentality that powers most unscripted programs. Quite the contrary: "Deadliest Catch" has brought old-school documentary sobriety to a genre more often known for shamelessness. I can think of few areas in which the show has made a misstep. (One is an overreliance on hyped-up music more appropriate to a Michael Bay action epic than a series about crab fisherman -- but faux-action film scoring has been a seemingly mandatory part of "reality" TV from "Survivor" onward; decrying it here would be as pointless as complaining that water is wet.)

A New York Times reporter asked Josh Harris if the family had requested that the show not air certain images or moments. He said, "No, because we want it to be as real as it can get." Captain Phil -- a pragmatic and rueful man, judging from his colorful (and often heavily bleeped) monologues -- often discussed storytelling with his designated camera operator and the ship's director of photography, Todd Stanley. "Keep filming," he wrote in a note to his sons and the show producers shortly before his death. "There has to be an end to this story."

The captain's sons told Discovery (and the media) that they and their dad wanted the show to capture the reality of a crabber's life. This is a job in which you can be maimed or killed by accidentally slicing your hand down to the tendons with a crabbing knife, or having an 85-pound chunk of melted ice slide off a crane and drop on your head (both of which happened on camera this season). Or you can go out like Captain Phil -- spending what you could never have imagined would be the final days of your life in excruciating pain from smashed discs in your back, then suffering a stroke after decades of drinking and smoking. All these possible fates are occupational hazards built into crabber culture.

An outsider might watch the destructive and self-destructive action in any given episode and think, "That's nuts -- someone should put a stop to it." An insider might rubber-stamp the experience as "The way it is" and never question any of it. "Deadliest Catch" navigates between these extremes. Its point-of-view wavers between an insider's credulous acceptance and an outsider's cool detachment -- a POV seesaw that's messier but more honest than a predetermined, fixed position. The filmmaking tells you, "These guys are sailors, and sailors have never been known for healthy living." But that's not all it tells you.

There's moral terror in the scenes that show Jake Anderson, the aforementioned, knife-wounded crewman, being hazed by his mates on the fishing vessel Northwestern as a useless "one-armed bandit." There's dread in the tight closeups of cigarettes clenched between Phil's fingers and butts piled high in his ashtray, and in Jake's confession that he was stealing his dad's pain medicine because "I'm an addict." And there's fathomless sadness in the scenes revealing that all the fleet's crewmembers (Phil included) are routinely pushed to the brink of collapse -- pressured to do 20, 30, even 40 hour shifts with little or no sleep, often in pounding rain or bone-chilling snow. The show's opening credits music, Jon Bon Jovi's "Wanted Dead or Alive," valorizes the crabbers as 21st century cowboys, doing what a man's gotta do. But the show's weekly accumulation of grubby detail links them with the battered Bible-hawkers in the Maysles brothers' 1968 documentary "Salesman" scrambling to meet their quotas, and the real estate agents in "Glengarry Glen Ross" struggling to make rain with weak leads. These contradictory viewpoints don't clash; they harmonize.

A mid-season episode of "Deadliest Catch" showed the fleet reacting to news that a 40-year old deckhand on a nearby vessel suffered a heart attack and had to be evacuated by a Coast Guard chopper. Jake and Phil heard the news on the captain's radio. Jake fled the bridge, muttering, "I can't hear that. It hits too close to home." From the nasty shipboard injuries to Phil's final recorded conversation with Jake -- during which he disowned his son for swiping his pills (and could the stress of that conversation have brought on the stroke?) -- the whole series hits too close to home. It's hard to say how much of its blunt honesty comes from its makers' ethical sense and how much is bound up in its chosen subject-- a hard job staffed by men who barely have time to eat and sleep, much less adopt fake, corny screen personas and sustain them over weeks. Either way, "Deadliest Catch" is a Trojan Horse reality show, smuggling integrity into a morally bankrupt genre. It's as real as TV gets.