I thought I'd beaten the foreclosure crisis

When the first wave hit, I shook my head at irresponsible Americans. Then I lost my income -- and my home is next 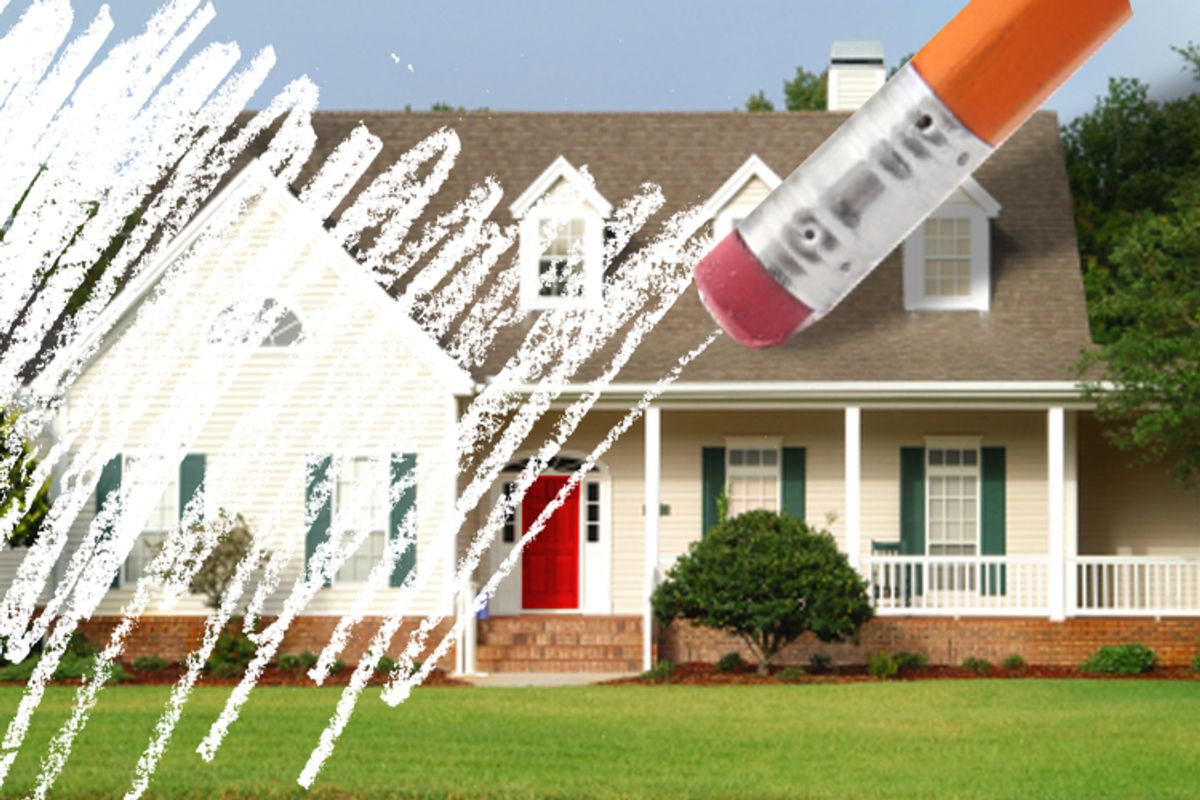 This is the story of a home with red doors. A home where a family has unpacked wedding crystal, changed new diapers, buried pets, watched far too many DVDs, fought over space on the bed/couch/floor, picked the weird green stuff out of the soup, listened to the moan of the reluctant cello, eaten popcorn, thrown popcorn, and unwrapped birthday presents. This is our home. Technically, I guess it isn't anymore; our home goes up for public auction next month. The house belongs to the lender – another statistic for the death lists.

The doors weren't red when the crystal was freed from its bubble wrap and set, with all its symbolic promise, on the Mission-style cabinet with the fingerprint-free glass doors more than a decade ago. Back then, the house's vibrant Craftsman beauty was still shrouded in dowdy cracked beige. My husband, Mike, and I spent the first year with hammer and sander carving out our home from this blank and bland canvas. We liberated hardwood floors with inlaid borders from the bondage of dusty brown wall-to-wall carpet. In retrospect, we should have left the hallway carpet alone, but who knew that there would be only subfloor beneath? Who takes the flooring out of a hallway?

The hallway provided the first clue that our views of homeownership and renovation were comically naive. Mike realized this before I did, but he didn't stand a chance. I'm the planner, the dreamer, the one with the improbably grand schemes and lists. In the 16 years since he was first foolish enough to ask me to coffee, my husband has learned to dread the words "I was thinking ..." "I was thinking" led us to purchase a century-old house marginally beyond our budget on two more acres of land than either of us (city brats, both) was prepared to handle in a town 30 miles from anywhere. "I was thinking" has resulted in extravagant birthday parties with days spent on hand-painted murals, themed food, cakes with marzipan palm trees, pyramids and pirate ships. "I was thinking" caused me to begin the first major attempt at renovation by celebrating my homecoming from a work trip by tearing the 1970s-era ersatz wainscoting from the walls of the hall bedroom. Mike's eyebrow hit a new apex at the sight of me surrounded by fragments of laminate, wallpaper and -- to his dismay -- sheetrock when he got home that evening. "We were going to get rid of this anyway," I chirped. "I decided to get started." (Three children and 12 years later, that room is still unfinished.)

When the foreclosure crisis first began to spread its tentacles two years ago, I nodded and tsk'd along with everyone else. We had seen the property values climb like Jack's beanstalk, wondered where on earth people were coming up with the money to pay these outlandish mortgages, and solemnly shook our heads at the irresponsibility of some people. We knew then that it couldn't last forever; someone would come along with an ax, and Jack, the harp and the golden goose would all tumble down. I never thought that I would be one of the villagers squished beneath the giant.

All things may be interconnected on a spiritual/cosmic level; that's not for me to know. However, I have learned, with a clarity never presented in high school civics, that all things are most definitely interconnected on an economic level. It turns out that veterinarians -- large animal vets, at least -- are not recession-proof. As the real estate market collapsed and California began to slide into the ocean of red ink, my clients -- both the affluent and the perpetually struggling -- started cutting back. Horses with lamenesses were no longer treated to expensive diagnostics and therapies; they were "kicked out to pasture for a while." New horse purchases, and with them the lucrative pre-purchase exam, became almost nonexistent. Beef prices rode the roller coaster of uncertainty and milk prices plunged even as the costs of feed and diesel soared. Envelopes arrived every other week revealing an income, based on a percentage of my gross revenues, sinking below that of a fast food employee. I began to ponder giving up my latte habit. I thought about applying for a barista job. I still think it might be the wise choice.

The 75-mile one-way commute grew more painful. There were days when I spent more money on gas to get to work than I earned once there. Debt has shadowed us since my maternity leave following the birth of our oldest daughter. The debt spread during an ill-conceived year of stay-at-home motherhood, and even once I returned to work, each subsequent maternity leave piled digits onto credit card balances. But we had always beaten the dragon back into the cave wielding the arrows of occasional prosperity and the broadsword of refinancing.

Was it the refi that tipped us over the summit? The paint job for the house? The new heater/air conditioner? The washer? The dryer? The water heater? Truck repairs? School tuition? It's still hard to say; it's almost impossible to trace the disaster to any one thing. Yes, the debt has been high, too high for prudence for years, but this year, things changed. We stopped answering the house phone, especially in the evenings. We told the kids that we didn't want to talk to "salespeople." What was there to say? Debt collectors don't care that the last paycheck had only three digits before the decimal point. They are unmoved by the transmission on the 2000 F150. We would pay the bills when we could -- we hoped.

That's it, really. Someone loses a job, takes out a bad loan, falls ill, whatever. They can't pay their debts. They lose their house, their home. The government loses property taxes. The government furloughs people. Those people stop paying their bills. And it comes around. And five people in an old house with red doors stop worrying about the weeds and cobwebs and begin to bubble-wrap their lives and look for a rental house.

We are the lucky ones. Income reduction notwithstanding, Mike and I both have jobs, are educated, and have a solid marriage. We will move closer to our workplaces, closer to the kids' school and closer to the lives that have crept upon us over the years. Our medical expenses limit themselves to annual exams or the occasional minor injury or fever. We have been blessed with three tough, funny, brilliant children whose only special requirement is for love. Love we can provide: in a house, with a mouse, in a tent, completely spent. Love we were given in spades, and it is the one surplus we have to pass along.

My grandparents move with me from room to room as I tape boxes and write "fragile" with frantic red Sharpie. They are all gone now: the paternal grandparents who helped us rewire the bedroom, the maternal grandparents whose money helped with my education and with the down payment for our home, my husband's grandmother whose wedding gift -- a crystal bowl carried from her internment days as a Japanese American during WWII -- is now packed away. Of all of the losses, it is their deaths that I mourn most as we say goodbye to our home. My renewed grief comes not from the sense that they would be disappointed in our failures, but because they, more than anyone left alive, would have understood and helped me to understand this twist in life's road.

Our grandparents belonged to the last generation to witness an economic cataclysm. We used to laugh at my paternal grandmother's tendency to save everything; even the last forlorn leaves of a salad went into a container in the refrigerator. But they knew, despite the virtues of hard work and education that they pounded into their baby boomer children and by extension even into my notoriously apathetic Generation X, how blurry is the line between success and failure, how narrow the fulcrum beneath the balance of fortune. They had their own stories: of poverty, war, death, internment, loss, loss, loss. And -- and this is the part I try to remember as we wait for the verdict on our rental application, as we tape boxes with no idea of where our belongings are going -- they persevered.

We will persevere as well. We will find a place to live, somehow. If not, well, as my grandmother once said, "I'll have the nicest bag on the street." I make those jokes these days. The jokes are not politically correct, not sensitive; they are my way of laughing at the darkness. I am not belittling those who have no home; on the contrary, I have seen how little separates our fates.

So, when you drive down a country road in Northern California, past the new subdivision with its preponderance of vacant homes and unfinished lots and the field of garlic waving tasseled heads, and you see an old yellow house with green and white trim and paint peeling from the red side door, use care when you ask yourself what sort of people could let a beautiful old place like that go to hell. Be careful, because this is the answer: people like you; people who painted the doors red as a sign of hospitality; people who learned not to use the lawn tractor along the edge of the gravel drive but who never got around to repairing the cracked window pane; people who threw a Dr. Seuss-themed first birthday party for their first child on the lawn that once lay where you see weeds; people who buried and mourned and now leave in the earth three cats, three dogs and one horse; people who had plans and dreams for the house they never intended to leave; people who created gardens and gravel walkways in their minds but never found the time or money for the reality; people who, when they close that dilapidated red door behind them for the final time, will have learned that the bold black line between success and failure is really just a series of dots and moving one of those dots can destroy the entire illusion.

Christy Corp-Minamiji is a writer and practicing veterinarian living "somewhere" in Northern California with her husband and three children.

Christy Corp-Minamiji is a writer and veterinarian living in Davis, CA. Her articles and essays have appeared in THE HORSE magazine and at Salon.com. She can be found at her blog and her website when not chasing after her children.