The traditional Arab-Argentine dessert gets a cold, creamy, caramelly makeover 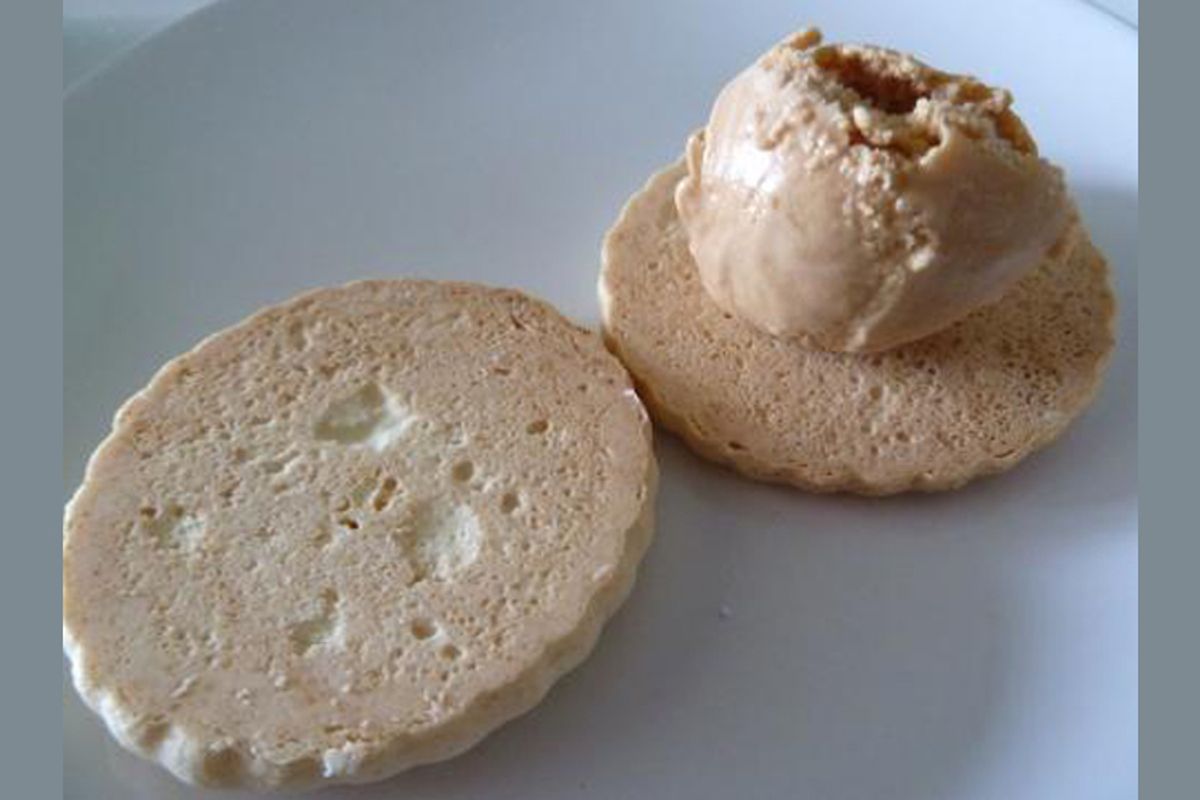 Before I met José, I had never heard of alfajores. José, whose parents hail from Cordoba, Argentina, may have been raised in Connecticut, but he has an Argentine soul. He can even do the tango.

He excitedly shared some alfajores after a trip back to visit family. He enthused, "The combination of the unctuous, sweet, toasty middle set off by the crumbly, citrusy cookie, is like Proust's madeleine for the Argentine set."

Argentines are known for their passionate opinions, and José is no exception, so I wasn't sure if I would be as overwhelmed by this cookie. After my first bite of this confection, though, I understood that this was no hyperbole. That first bite triggered a sort of madeleine moment for me as well: I realized that I actually had seen, but not tasted, alfajores before. They're sold without fanfare in bodegas around San Francisco, and in certain cafes that otherwise have no trace of Latin American ties. They're usually kept in a glass jar or Lucite display case near the cash register and, to be honest, don't look all that appealing to an alfajores novice. They look like dry cookies mounded with too much confectioners' sugar. But as I found out, the homemade version is completely different.

As presumed alfajores innocents, as I was before José's initiation, let me give you some more details. The alfajor (singular for alfajores) is a lemony, buttery sandwich cookie containing dulce de leche -- the beloved caramel sauce of Latin America. It's often dusted in fluffy white confectioners' sugar, or alternatively, dipped in chocolate or a sugar glaze. Some versions also use flaked coconut. Its exotic-sounding name traces its ancestry to the Moors who ruled the South of Spain in Andalusia for 800 years. Andalusia retains much of its Moorish character: There's lacy architecture and buildings adorned with intricate tiles featuring geometric and floral designs. The name "alfajor" itself has Arabic roots, translating as "fancy" or "great" sweets.

When the Spanish conquistadors set up shop in Latin America, they brought over alfajores, hence the popularity of these treats in Argentina, Uruguay, Ecuador, Paraguay, Chile and parts of Brazil. Each country has a variation on alfajores, and each claims its own as the authentic version.

Seeing as I was enthusiastic about his alfajores, José asked if I would like some of his mother's homemade dulce de leche. Of course! I was excited. I imagined his mother performing alchemy, stirring a pot of butter, milk and sugar over the stove for hours until it was transformed into the thick caramel sauce. You could do that. But I found out that most Latin Americans, including José's mother, make dulce de leche by warming an unopened can of sweetened condensed milk for hours in a slowly simmering hot water bath. José's mom also adds cocoa powder to thicken the dulce de leche, if needed, when she makes alfajores.

Most alfajores lovers from Latin America insist that homemade alfajores are the best. But not everyone has the time to simmer condensed milk for hours, or to make the corn starch-based butter cookies, called maicenitas, that form the sandwich. Commercial brands of dulce de leche are available, as are mass-market brands of alfajores (Havanna is the most popular), but José does not find these worth eating. He'll hold out for homemade. Second best are those baked by an old bakery in Cordoba called La Costanera. He and his family make a pilgrimage to La Costanera whenever they visit Argentina:

"Whenever we go to Argentina, we bring back a box of La Costanera alfajores for each of the rest of the family. They sell different shapes and sizes of alfajores, usually with a lightly sweet sugar glazing. At La Costanera bakery (which my dad remembers from when he was a kid in the 1940s, and which up until the 1990s still had an old woman working there who he remembered from childhood), they also have alfajores with jams (apricot, quince, etc.) as the filling -- but these are clearly inferior, not anything to waste your time upon."

José's favorite variety from La Costanera is called a Colacion: "It has only one cookie, kind of concave, with a thick layer of dulce de leche... I quickly discovered during childhood that this has the maximum dulce de leche-to-cookie ratio, the key measure of worth of an alfajor, of course." See what I was saying about passionate opinions? And long ago memories triggered by a cookie? Now I understand that his reference to Proust's madeleines was heartfelt.

Since it's the middle of summer, I've created an alfajores-inspired treat to cool you down. It's an ice cream sandwich made with the same buttery cookies used in alfajores, but filled with dulce de leche ice cream instead of straight-up dulce de leche. It's dusted with confectioners sugar and rolled in flaky white coconut to make you imagine snow, icy cold snow.

Yield: about 3 cups (enough for ice cream recipe below, with another extra cup to make regular alfajores or to spread on bread).