With Carl's Jr. introducing a new foot-long burger, we reveal corporate designs on the future of our fatness 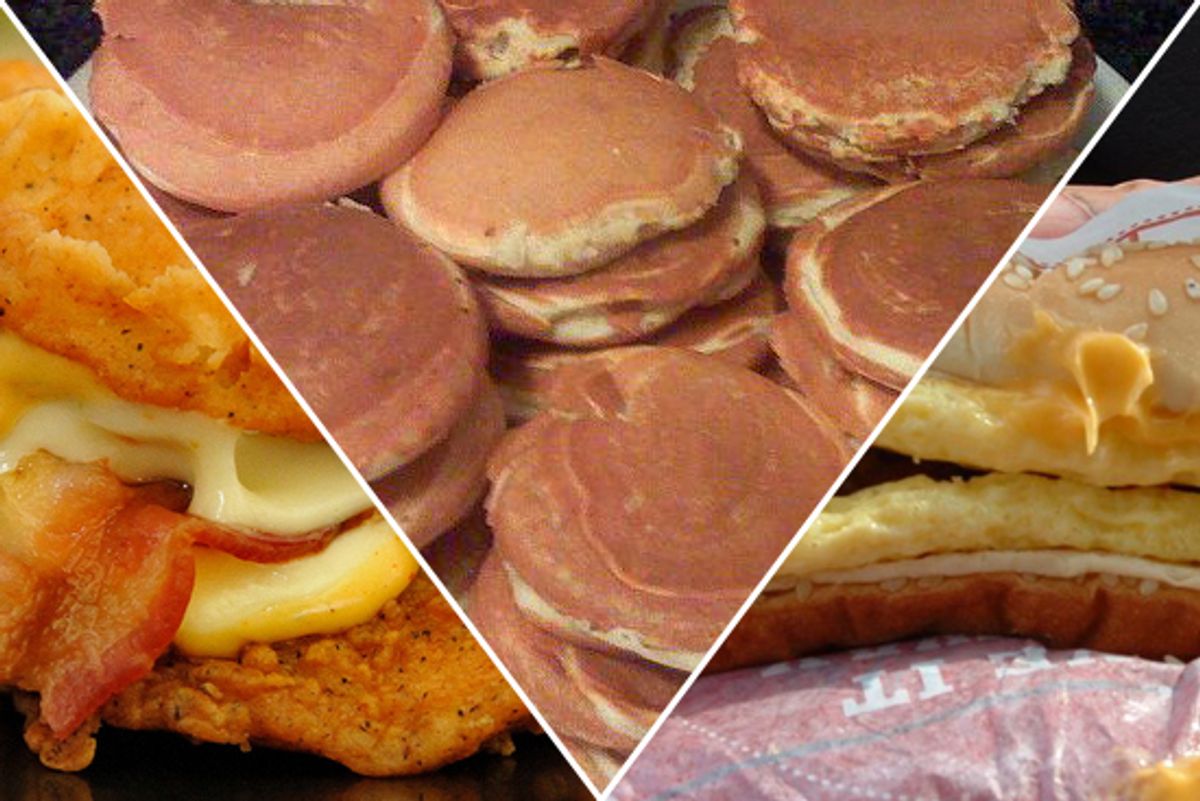 A KFC Double Down, pancakes, and the Burger King Enormous Omelet Sandwich
--

We are, ladies and gentlemen, deeply situated in a dark, golden age of perverse novelty fat-foods. Maybe, a few months ago when we were still innocent, we thought it would end when KFC co-opted the This Is Why You're Fat crowd with the Double Down. But no, all it did was make it safer for corporate America to throw more grease to the wolves.

So what's next? Well, we at Salon Food have obtained super-secret internal memos and meeting recordings from leading and not-so-leading food chains on what they have in store for us. (HEY, NOT REALLY. THIS IS A JOKE. Chain your lawyers back up.)

The Taco Bell Burraco: Look, we're tired of pretending like we ever have new food at Taco Bell, because you know and I know everything is just some combination of the same shit we always have lying around. You want a new special for August? Fine: "Try a new Burraco today, a burrito filled with whole tacos. Ding ding, you drunk bastard."

Backyard Burgers' new Briquette Burger: Our latest market studies show that men self-identify with outdoor, backyard charcoal grilling. This is our season to shine. The marketing team has unveiled a new messaging strategy for the test kitchen's latest invention: "If you like the flavor of charcoal grilling, you'll love the flavor of our new Briquette Burger -- a half-pound of beef, smothered in real cheddar cheese and charcoal ashes. Because you're man enough to eat the burger that fell through the grate."

Roy Rogers' new Starvin' Cowboy: Gentlemen: It has come to our attention that the market sector for unusual, attention-grabbing foods is enjoying enormous growth. We have determined that it is time to finally unveil the secret sandwich our founder Cowboy Roy always envisioned: roast horse. (It was also the inspiration for our calling horseradish mayonnaise "Horsey sauce.") Marketing has focus-grouped and approved a name for the item, in the spirit of Roy's time lost in the desert: the Starvin' Cowboy.

Pinkberry's Extra-Natural™, Negative-Calorie yogurt: Dear Leaders, The Americans have proven to have an inexhaustible demand for our low-fat yogurt. They have forgotten about their own TCBY and have ceded the frozen yogurt market to us. They seem also to think that our sugary yogurt is low in calories, and have consumed it, as planned, in liter-size bowls. Through a joint partnership of scientists in Seoul and Pyongyang, we have developed a new product that will win the Americans forever: A yogurt that will turn the digestive system against its owner and eat itself from the inside out. We will call it, "Negative Calorie yogurt, the treat that burns calories for you!" Red Mango will be no match for us! Red Mango can kiss our ass!

Burger King's Enormous Omelet Sandwich re-unveiled: (Taped from a meeting with The King)

The King: Man, what the fuck!

Handler 1: What is it, Your Highness?

The King: Don't "Your Highness" me, you weak motherfucker! Tell me how this happened! All of a sudden, you got that fake-ass colonel selling some dumb-ass sandwich with no bread and getting mad airtime. You got some hedgehog-looking fool selling foot-long chili dogs and it got people talkin'. Man, I've been eatin' foot-long dogs since I was a foot long! How is it that these weak-ass players with they weak-ass game can get hot?

Handler 2: Your Highness, perhaps we were too early in our strategy...

The King: Bring it back. BRING IT BACK! RELEASE THE OMELET!

Handlers 1 and 2: Sire! Sire, are you sure you know what you're doing?

The King: Humanity can kiss my ass!

Domino's three-decade study on what people will eat: And finally, of course, there's Domino's long-term study on whether man is man or man is trash compactor, as revealed by the intrepid ONN team.


Domino's Scientists Test Limits Of What Humans Will Eat