From sauces to funky flavors and frozen key lime pies. Plus next week's challenge: Watermelon! 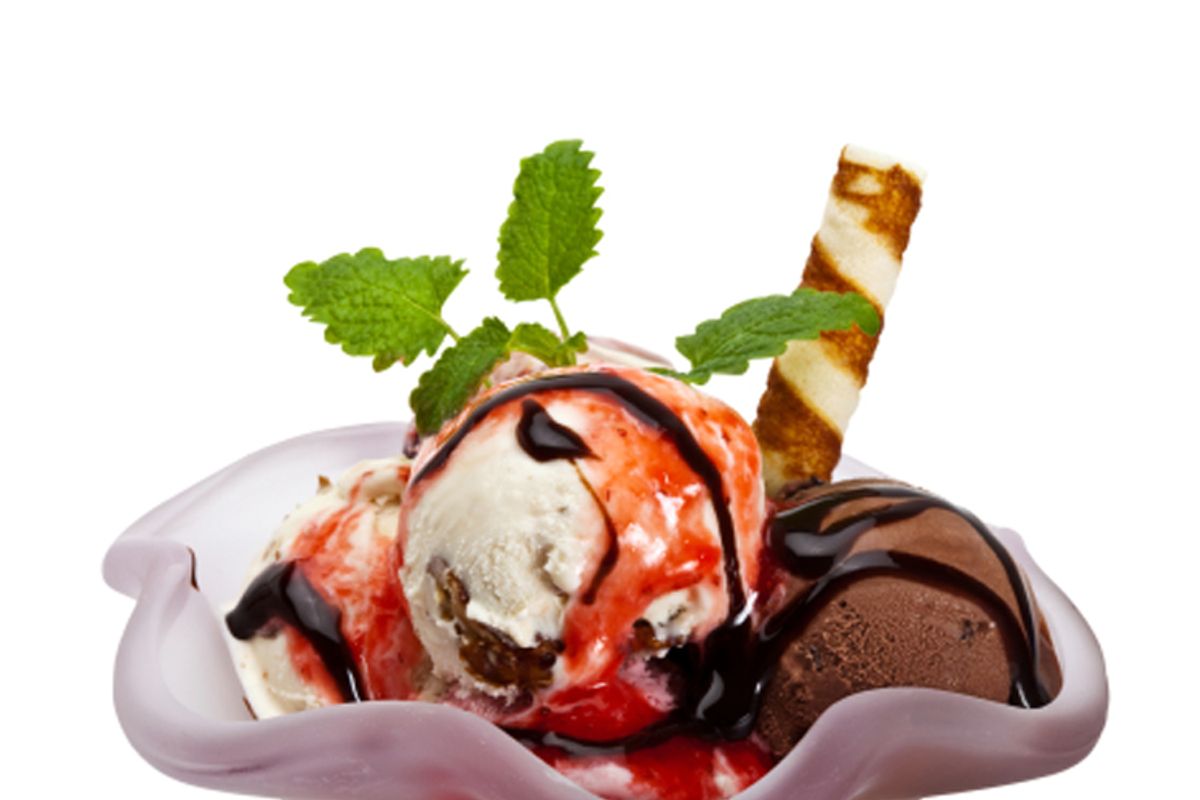 This week, we asked for your greatest ice cream accouterments.

Baked Aleutians With Georgia Peach Ice Cream by Lucy Mercer: It is hard, I admit, to divorce the brilliance of these treats from the brilliance of their name -- miniature Baked Alaskas named, instead, after the tiny islands off the Alaskan Peninsula. (And triple-nerd points for the title of her post: "Bering Strait for your table.") But all that said, can you deny the pleasures of poundcake filled with fresh peach ice cream with toasted meringue on top?

Baked Florida by Drew Emery: Apparently this week's SKC is going to become a war between the states, but Drew proves that it's not just Alaska that can get away with ice cream in a hot meringue dome. How about a key lime ice cream pie? Killer.

In the Uncommon Flavor category:

Hot Sauce Ice Cream by Jacob Leland: In some circles, there is a kind of weird-flavor arms race in ice cream -- we've seen prosciutto, fish and chips, rum raisin. (Really, who likes rum raisin?) Most of the time, most of the pleasure in these ice creams is in the novelty of the name. But while we haven't tried this yet ourselves, the way Jacob describes this flavor -- made with an extra-hot Asian chili sauce -- makes us ready to give it an enthusiastic shot: "It's so spicy and tangy that your mouth wants something cold and creamy to cool it down. What you have: more Sriracha ice cream. Thus, an addiction is born. I put it on sweet potato and pecan pies, or I eat it too fast, standing in front of the freezer." Plus, how can you not want to try a recipe made up by someone whose blog is called "Friday Is Pie Day"?

In the Sandwich category:

Dulce de Leche Ice Cream Sandwiches by Linda Shiue: Latin Americans of many stripes adore little dulce de leche caramel sandwich cookies called alfajores, but Linda was never a believer in them until her Argentine friend showed her the charms of the homemade variety. Inspired by the tradition, she took the recipe and amped it up, replacing the dulce de leche filling with homemade dulce de leche ice cream. Gol!

In the Sundae category:

Roasted Peach Melba Split by Melissa Houle: While singing a lengthy love song to ice cream in all its incarnations, forms and manifestations, Melissa shares with us this genius sundae -- brown-sugar broiled peaches replace the standard banana, and ginger caramel and fresh raspberry sauces do the lily-gilding honors.

PLUS, ALSO, TOO: THE EXCELLENT HONORABLE MENTIONS

Real Chocolate Shakes and Malteds by OESheepdog: OESheepdog goes totally traditional, but so traditional that it may fall in the category of everything old being new again. But along the way, the entry gives us the secret to a killer shake: near-frozen milk to keep the texture thick and rich.

Crisp Pastry Nests for Ice Cream Scoops by Fusun Atalay: The Middle Eastern pastry threads called kadayif or kanafeh are traditionally used to make sweet rolled nests around nuts and honey, but here Fusun shows us how to mold them into beautiful, light, crisp bowls for ice cream.

Chocolate Matzo (or Saltine) Crunch Ice Cream by Small Kitch Cara: Working on the mix-in theory of unlimited ice cream flavor, Cara (of the blog Big Girls Small Kitchen) comes through with the brilliant idea to bake matzo or saltines crisp with some butter and sugar, slather them with chocolate, and break them up into ice cream. Passover, come back soon!

Call us crazy, but isn't there something fundamentally unsatisfying about air conditioning? Don't get me wrong; when you can see the heat bend the air and eggs are frying on the sidewalk, ducking into an aggressively climate-controlled building can feel like it's saving your life, when the heat disappears entirely and all of a sudden you realize the universe isn't really your enemy.

But isn't that just the problem? Air conditioning is too enveloping, too disconnecting from the reality of the world. Isn't there a greater satisfaction to be found in, say, an icy drink in the sun, when you can feel the delicious tension between the heat and relief from it?

We're bringing this up this week because watermelon is on our minds -- one of earth's greatest hot-weather refreshments. Ice-cold and straight-up is how most people love it, but while finding out how exactly to pick a sweet, juicy specimen, we learned that when kept hot in the sun, the fruit takes on fascinating tropical flavors. And, owning to its incredibly hydrating nature, it's no less refreshing when warm.

The brilliant chef Daniel Humm of Eleven Madison Park restaurant offers a salad of grilled watermelon and heirloom tomatoes. At the Malaysian-inspired Fatty Crab, Zak Pelaccio has a dish where cubes of watermelon offset salty, crisp chunks of fried pork belly. And intrepid commenters on that watermelon-choosing guide suggested making traditional watermelon-rind pickles. So we got to wondering: What delicious, and maybe unusual, ways can you think of to prepare watermelon?

Be sure to tag your posts: SKC watermelon (Please note that by participating, you're giving Salon permission to re-post your entry if it's chosen as a winner, and acknowledging that all words and images in your post are your own, unless explicitly stated. Adaptations of existing recipes are fine, but please let us know where the original comes from. And if you'd like to participate but not have your post considered for republication on Salon, please note it in the post itself. Thanks!)

Scores will be very scientific, given for appealing photos, interesting stories behind your submissions, creativity, execution and juiciness.