Can infrastructure-led growth save the economy? 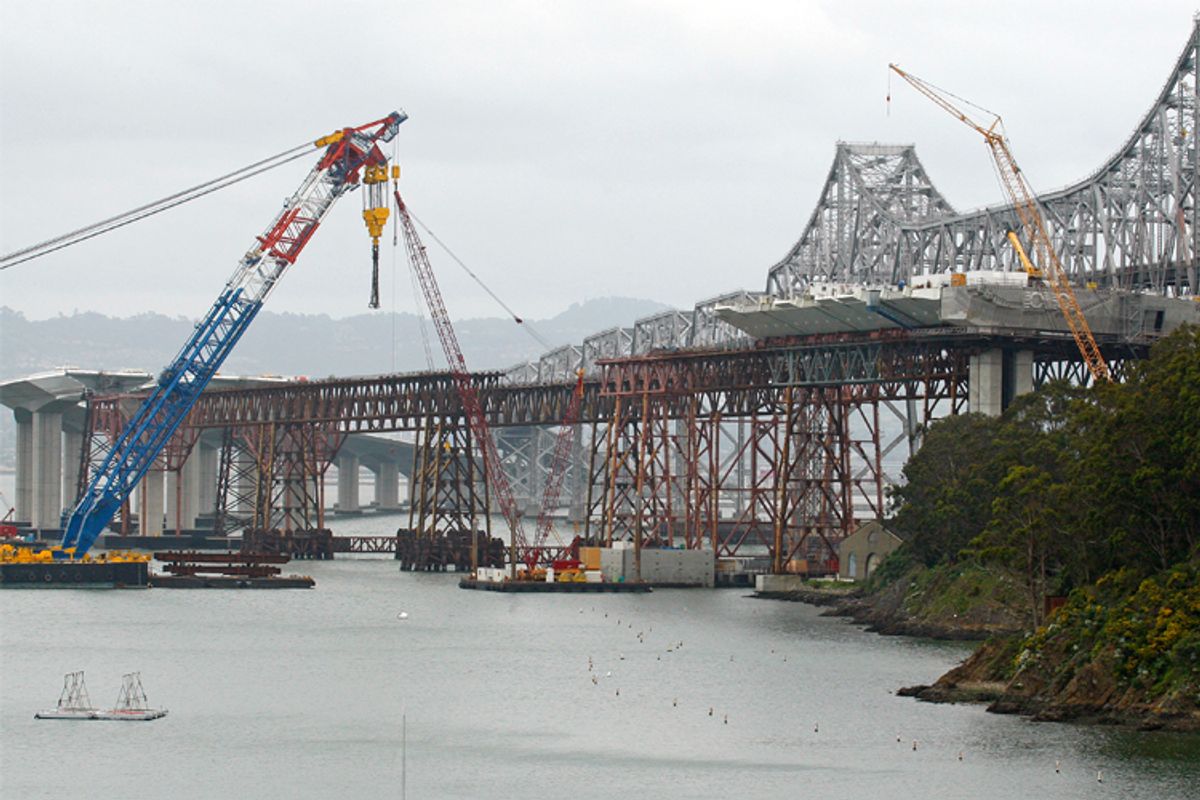 Construction work on the new eastern span of the Oakland-San Francisco Bay Bridge in April.
--

In the case of the economy, the problem is the weakness of private domestic demand in the U.S. The purpose of the tax cuts in the stimulus bill and "cash for clunkers" was to increase consumer demand until it revived to lead a recovery. But most businesses met the additional demand without new hiring and many Americans used the money to pay down debt or increase savings. The other parts of the federal stimulus -- spending on infrastructure and aid to the states -- were too small and largely counteracted by the contraction of state and local economies.

What about private foreign demand? In the past, some countries like Japan and Sweden have managed to grow in the aftermath of asset bubbles with the help of foreign export markets and currency devaluations. Could the U.S. export its way out of prolonged stagnation?

The Obama administration seems to think so. But President Obama's bold aim of doubling exports is at odds with his small-bore proposals: more poultry sales to China, more pork sales to Russia, and more American exports to Colombia. We are expected to believe that the Obama administration will accomplish a remarkable expansion of U.S. exports without retaliating against China for its currency manipulation, devaluing the dollar against Asian currencies and the euro, preventing imports from growing even more rapidly, or practicing anything that could be denounced by Republican conservatives and the Robert Rubin/Wall Street wing of the Democratic Party as "industrial policy."

Even if the U.S. were genuinely committed to increasing exports, such a policy would be unlikely to succeed. Proponents of global rebalancing argue, correctly, that trade deficit nations like the U.S. should export more, while trade surplus countries like China, Japan and Germany should import more -- including more American products. But despite paying lip service to rebalancing, China, Japan and Germany still hope to export their way out of the recession. How can much-hyped American "green exports" in particular lead American growth, if the rest of the world wants to sell windmills, solar power and high-speed trains to us, rather than buy from us? To make matters worse, the austerity programs being adopted by many European countries will shrink the European consumer market, and a weak euro and stronger dollar will hurt American exporters as well.

In theory, foreign public demand could replace American consumer demand. However, there are few cases of public procurement in one country driving export growth in another, although Japanese industry benefited from its role as a supplier to the U.S. during the early Cold War. A civilian equivalent today would be infrastructure-led growth in Africa and other developing regions, paid for by government borrowing or foreign direct investment. But the money is not there. And if it were, can anyone seriously believe that American businesses would not be largely locked out of public procurement in the global South by the mercantilist nations of Asia and Europe, which do not share American concerns about free markets, industrial espionage and human rights? American multinationals that do take part in infrastructure-led growth in the developing world are likely to hire local labor and to source inputs from all over the world, rather than use raw materials and products that are made in America.

If neither foreign private demand nor foreign public demand can compensate for the loss of American private domestic demand, then the only possible source of increased demand for American goods and services that remains is public domestic demand. American government at all levels may need to provide much of the missing demand for American businesses and labor, for the decade or longer that is needed for private sector deleveraging in the aftermath of America's asset bubble.

To avoid competing with private enterprise, the government should produce public goods that increase overall productivity and that the private sector has no incentive to provide, in good times or bad, such as infrastructure and social services like policing, health care, education and care for the young and old. In addition to mobilizing idle resources and labor directly, both infrastructure and public service spending could help business in general by boosting the purchasing power of Americans who are now unemployed.

Infrastructure-led growth could boost private-sector productivity if it lowered energy costs for businesses and households, reduced freight and passenger congestion or increased the efficiency of telecommunications while lowering the cost. At the same time, infrastructure-led growth could bolster American manufacturers and suppliers and prepare for an export rebound in the future, as long as Buy American laws required that all infrastructure inputs like steel, concrete and electronic components, and all equipment used to construct infrastructure, including machine tools and construction vehicles, must be made in the U.S. If the World Trade Organization were to rule against such a Buy American policy, then the U.S. should demand a change in WTO rules, on penalty of unilateral U.S. withdrawal and the collapse of the WTO.

How should we pay for public domestic demand-led growth? By more borrowing and by higher taxes that fall disproportionately on the rich. Both would channel now-idle savings into enhancing the infrastructure networks and manufacturing base of the U.S.

Infrastructure projects that enhance American productivity should be paid for by borrowing, with their costs repaid more rapidly over decades or generations with the help of the more rapid economic growth that they make possible. If more federal borrowing is blocked by the irrationality of deficit hawks and the ignorance of many populists who do not understand public finance, then money for infrastructure should be raised by tax-favored municipal bonds, like Build America Bonds (BABs), and/or by the creation of public investment banks, like a national infrastructure bank, that can raise funds by issuing their own government-backed but off-budget bonds.

Deficit hysterics to the contrary, U.S. federal, state and local debt, along with the "agency debt" issued by government-sponsored enterprises, will continue to provide desirable, safe investments for investors at home and abroad. Investors may gamble in emerging markets, but where will their money be safer than in the U.S.? In demographically declining Europe, suffering from misguided austerity programs? In dictatorial China, where oppressed workers are rioting and committing suicide? In authoritarian, secretive, insecure petrostates?

Unlike infrastructure projects, expanded public services like policing, health care, and publicly-provided or subsidized child and elder care should be paid for out of higher taxes. The new taxes should be phased in gradually and should fall disproportionately on America's undertaxed rich. Given the ease with which higher income taxes are avoided, higher taxes on the rich should take the form of a federal value-added tax (VAT) and higher property taxes. Both kinds of taxes can be made progressive by exemptions or rebates. According to the Organization for Economic Cooperation and Development (OECD), property taxes and consumption taxes are the taxes that harm economic growth the least.

Free-market fundamentalists assert that the public sector is parasitic and that only the private sector is productive. But productive enterprises can be private or public -- and so can unproductive enterprises. Infrastructure spending and improved public healthcare increase the productivity of America's businesses and workers. Trophy houses and day spas do not. Taxing trophy houses and day spas to pay for public programs that decrease freight transportation costs or telecommuting costs or prolong the working lives of healthy Americans makes a lot more sense, even in narrowly economic terms, than sacrificing important public goods in order to enable more conspicuous consumption by the affluent.

Didn't Japan's infrastructure-led public domestic demand policy fail to revive its economy, after the collapse of the Japanese asset bubble in the early 1990s? Yes, but Japan's situation was the opposite of America's. Japan had an anorexic consumer sector and a bloated infrastructure sector. Infrastructure-led growth in Japan as a cure for recession was like a diet of sweets for a diabetic. In the U.S., in contrast, years or decades of infrastructure-led growth are necessary to bulk up our long-starved energy, transportation, and communications sectors, while buying the time it will take for our debt-heavy households to slim down. And even though it was the wrong medicine, Japan did get something for its massive investments in infrastructure, including computer-enabled "smartways," universal broadband, and high-tech trains and airports that are far more advanced than our own.

The very idea of a "stimulus" was always misconceived. It assumed that government action was needed only temporarily, until private domestic demand returned the U.S. economy to something like the pre-2008 status quo. What is needed, however, is not a brief episode of intensive care for an otherwise healthy patient, but a pacemaker and an artificial hip for a patient who cannot emerge from a coma without radical, reconstructive surgery. If the Iron Age of the economy is to come to an end, the expansion of public domestic demand must be large enough that it can play much of the role in the American economy played by wage-led private domestic demand in the Golden Age of the 1940s-1980s and by debt-led private domestic demand in the Bronze Age of the 1990s-2000s. Even the conservative ideologue Amity Shlaes, in her anti-Roosevelt screed The Forgotten Man, concedes that massive public investment worked in 1936: "The spending was so dramatic that, finally, it functioned as Keynes ... had hoped it would. Within a year unemployment would drop from 22 percent to 14 percent."

In the summer of 2008, Lawrence Summers, now President Obama's chief economic adviser, declared that any stimulus should be "timely, targeted and temporary." He was wrong. The expansion of public domestic demand that America needs must be prompt, productive and prolonged.

Michael Lind is Policy Director of the Economic Growth Program at the New America Foundation.