How I knew it was time to stop breast-feeding

I was told weaning would damage my son's psyche. When he uttered a full sentence demanding boobs, enough was enough 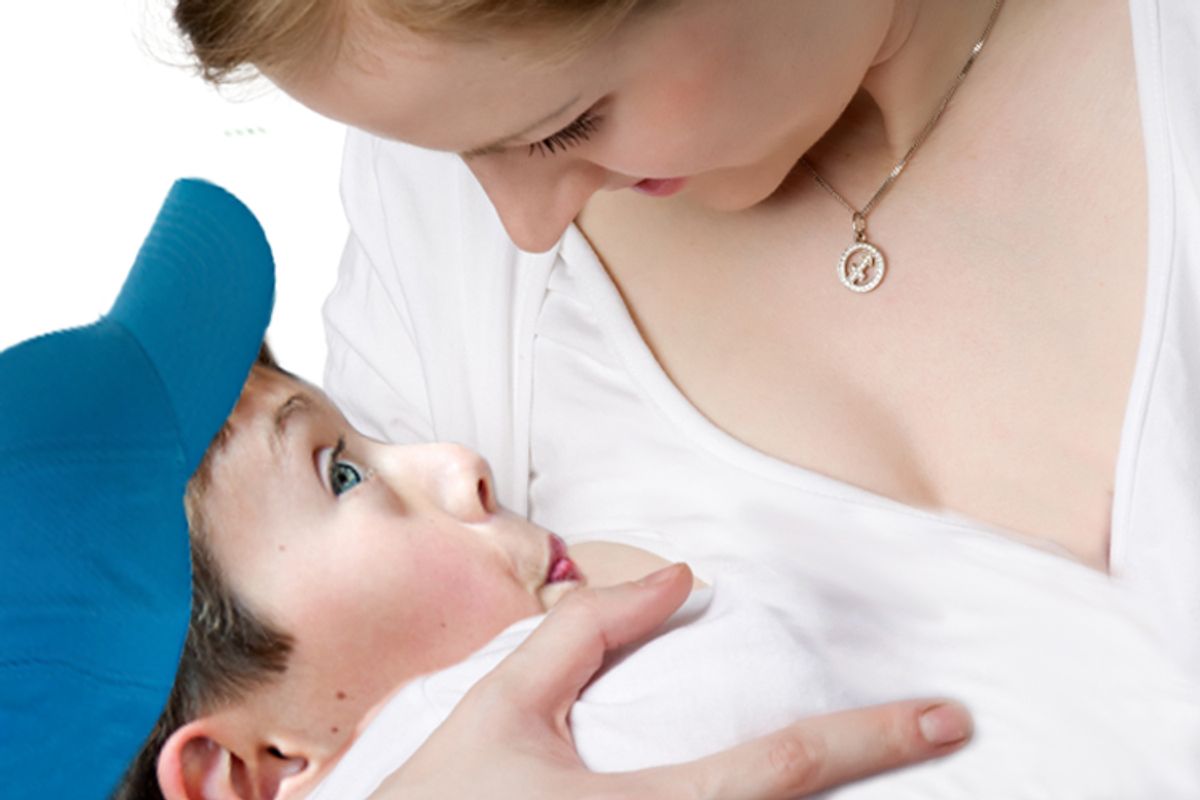 A few decades back, I was at Sears shopping for bras and finding nothing. The sales clerk looked me over and handed me one, "I believe this will work." She was right. It fit perfectly and I was elated. Then I looked at the size. In cute italicized lettering the tag read: "nearly A." Now I understood her vaguely smug look. I walked out of the dressing room and handed it back. "Thanks, anyway." I waited until she went on break to buy it.

It wasn't that I didn't know I was small-breasted. I could wear a leotard, apply Band-Aids on my nipples and leave it at that.  Still, it felt profoundly odd to be "nearly A." Worse than a "training bra" which implies preparation for something yet to be, something you need specific information to know how to handle. "Nearly A" signals defeat, but, "Hey, thanks for the effort!"

My husband said "nearly A" didn't bother him. But when I got pregnant his eyes would fixate on my enlarging chest. He said he just couldn't help looking, because ... because ... they were there. And they were glorious. I heard stories of this peculiar male behavior from my large-chested friends. It was disconcerting to have conversations with eyes resting on my boobs.

But the enlarged breasts had a purpose, and that "purpose" latched on for almost two years until there was another "purpose" that latched on after that. As hard as I tried, I could find nothing about "the girls," as my husband now called them, that seemed remotely sexy. The slightest touch would bring forth the milk. "The girls" hurt when they got too full, or the baby decided to clamp down and pull when done eating. My daughter was so fierce she drew blood. She yanked away and grinned up at me with pink milk dripping down her tiny chin.

With my first baby, I had no idea what I was doing, so on the advice of a friend I looked up a breast-feeding support group. The meeting started with sharing birth stories. These were warrior women who took no pain relievers, no epidurals, no episiotomies and gave graphic details. The pregnant women in the group voiced desire to be like them. I was secretly grateful that I'd had a Caesarean. Following the "birth war" stories, the leader gave an impressive presentation on breast-feeding benefits. Our babies would be smarter, healthier and happier. As adults they would have straight teeth, firm jaws and be less likely to smoke or become addicts. We looked at each other with self-satisfied smiles. She asked if there were questions. I had only one: "When should I wean my son?" There was an audible collective gasp. They looked at each other, then me, and then to the leader. She took a deep breath, closed her eyes briefly and then answered: Never, never, never forcibly wean a child. He will be traumatized by your taking away his source of comfort and may never get over it. When your son is ready, he will stop on his own. Let him nurse as long as he wants. That will make him emotionally stable, confident and compassionate. If the whole world followed this advice, we would have less aggressive men,  kinder and gentler nations and, quite possibly, world peace.

Thankfully another mother asked a non-heretical question, and the attention was off me. I scanned the room. Most of the mothers had babies less than a year old. There were a couple of active toddlers who would take quick nursing breaks and go back to playing. I looked down at my son and tried to imagine him as a nursing toddler. Then I noticed a boy who was reading a book in the corner near me. I said "Hi" and asked him what he was reading. He started to cry. He ran to his mother, pulled up her shirt, pulled down her bra and started to nurse loudly and enthusiastically. His mother smiled demurely and explained, "He only does this when he is scared. And when he takes a nap. And, of course, bedtime." The boy was 7 years old.

When the meeting was over the leader pulled me aside and suggested I not worry about weaning. Nursing will soon be a very natural and immensely enjoyable bond between me and my son. She winked and said, "You won’t want him to stop."

My son turned out to be impressively verbal. At around 8 months he would say "Na Na" when he was hungry. Everyone commented on how smart he was. When he was a year he clearly said the word "nurse." We were so proud. By a year and a half, a full sentence: "I want to nurse." That startled strangers, but I thought it was cute. One day we were visiting my in-laws and I was upstairs resting. From down below, where all the male relatives were watching a football game, I heard my almost 2-year-old son say in a loud and clear voice: "I want mommy's breasts!" My husband brought him to me with a shrug and an apology, "Like father, like son."

I weaned that little sucker in a week.