When every scent disappeared from my world

After a nasal spray robbed me of smell, I learned how much it shapes our lives -- from food to sex 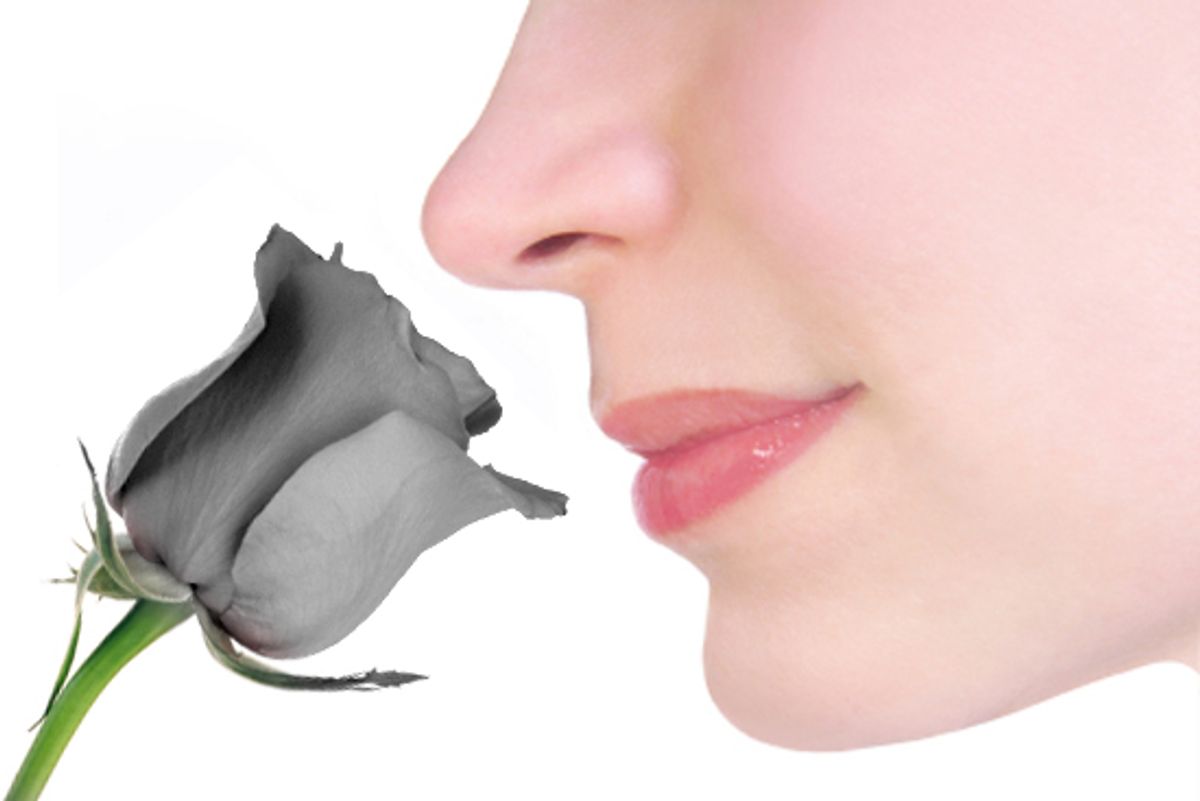 In the fall of 2005, after the first inklings of a scratchy throat, I sniffed a bit of Zicam, a homeopathic nasal spray said to ward off colds. When it burned like a blow torch, I figured the remedy was working: Go get those germs.

Driving home from my daughter's college campus a week later, I noticed an odd odor, the first thing I'd smelled in days. Actually, there were several smells, all of them evocative of death and decay: Manure. Rusty metal. Rotten meat.

Oh, and fish emulsion. I'm a gardener, and a garden writer, so I notice things like fish emulsion. My nose is finely tuned to the mineral scents of the earth, but that day and the weeks that followed, it was as though the air around me turned vile. It smelled of dead fish, burning rubber, the notoriously stinky corpse flower that lures carrion flies to pollinate it.

Was I losing my mind? No one else smelled anything unusual. A Google search informed me that phantom smells were a sign of schizophrenia. They also foretell M.S., Alzheimer's and Parkinson's. What I had was anosmia.

Don't know that term? Hardly anyone does. I'm reminded of that every time I type it in a Word document and a scolding squiggly red underline appears underneath the word. But as the ear, nose and throat doctor explained, "Anosmia is a medical term for 'no smell.'"

I was baffled. How could I have lost my sense of smell when I was smelling things -- terrible things?

The ENT called them olfactory hallucinations, and compared them to the pain amputees describe in their missing limb and the ringing in the ears of tinnitus sufferers. He didn't know why these olfactory hallucinations were so repulsive or why they refused to vanish. Phantosmia, as it's known, is quite rare. Eventually, over the course of nine months, I would untangle the rest of the mystery: that the Zicam stripped my nasal receptor sheet, resulting in total loss of smell. But at the time, I was in the dark, and terrified. The doctor sent me home with a pill that "tricked" my brain into shutting down the smell factory. My life without smell had begun.

"You can't deny that anosmia has its advantages," my husband said, as usual trying to make light of a bad situation. "You don't have to smell your own B.O." But it wasn't funny the morning he rushed upstairs to my attic office, hollering that the house was on fire because I'd left a saucepan on the stove.

It took months for what we both had lost to sink in. Without smell, taste is hopelessly compromised. Taste is 90 percent smell. (Even a sugar cookie has a metallic edge to it.) There would be no more lazy afternoons cooking in the kitchen and sharing a bottle of wine. No more sipping, sniffing, comparing notes. No more heated debates over which was better, the Pinot Grigio or the Sauvignon Blanc. Sure, wine would still give me a pleasant buzz; it also tasted like castor oil.

My husband developed a daily ritual of grabbing a jar of mustard from the fridge and shoving it under my nose. Could I smell it now? Then an onion, or garlic, or cloves. A neurologist friend had told him that cloves are one of the first things an anosmic can identify correctly when smell begins to recover.

Recover? Yes, it could happen. But my ENT advised me not to get my hopes up. Chances were I'd be stuck forever in this strange world drained of a million smells, familiar pleasures, a world no one but an anosmic could imagine or understand.

About 5 percent of the population suffers from smell dysfunction. (It can also be caused by a virus or a head injury, allergies or polyps, or a brain tumor.) Many anosmics endure debilitating depression as well, and they are more prone to suicide long term than those who go blind or deaf. Of course, blindness is more crippling than a broken sniffer, but I wonder if those statistics don't reflect the isolation of a disease that's so misunderstood, that elicits more blank stares and furrowed brows than long sighs of sympathy. Even friends seem to downplay the diagnosis. Or shrug it off entirely. (I spent many a painful dinner party listening in silence as everyone deconstructed each dish as it came to the table.) A person with a working nose simply can't grasp what it's like when pizza tastes like cardboard seasoned with Listerine. (Plugging your nose isn't anosmia. For one thing, you can still smell through the back entrance for odor molecules, behind the mouth.) I felt untethered from the world, robbed of the calming presence of smells you don't notice until they're gone -- a musty pillow in an old cabin by a lake, the earthy humidity of an incoming thunderstorm -- smells that, as Proust knew so well, are a trapdoor to your past. "Disconnected" is the word anosmics always use to describe their situation, followed by the word "lost."

Over time, my painful discoveries continued. Anosmics are prone to insomnia. Regulating food intake gets tricky, because the brain can't deliver the hormones that control appetite without a working nose, so anosmics never feel full or satisfied. They often pack on the pounds, becoming robotic and relentless eaters. Even sex was sadly muted -- you can't smell your beloved's skin and hair, the bed linens, the lusty smells of sex itself.

Losing my smell was a reminder of just how primal the sense is. It's been with us over millennia, as humans evolved from slimy creatures with only a nose to guide them (insects like the fruit fly were equipped with olfactory antennae). Smell helped us learn how to mate, hunt, compete, collaborate and love. This is why the ancients slathered themselves in herbal scents and, yes, manure. They worshiped smell as a pipeline to the fertility gods.

And yet, in our society's view a person who can't smell is not disabled at all. (You won't get disability pay unless smell is a part of your job.) For Zicam victims like me the reward for joining a class-action suit promised to be a pittance. No, thanks, I said. (The lawyers, of course, made a bundle.) Zicam was recalled in 2009. But the loss of control I felt was maddening.

I was. But I knew I could go on with my life, if only for my family.

People ask me when I knew my nightmare was over. This is a tough question. There were hints. The smell of popcorn. A baggie filled with my dog's poop that I'd dutifully collected during one of our long walks. I told myself to get a grip and stop imagining things. Only a few anosmics who lose their sense of smell get their smell function back.

It was a one-of-a-kind smell, an odor whose presence you can't possibly make up, that finally convinced me that I was one of the lucky ones. I caught a faint whiff of catmint as I was weeding my garden. It sideswiped me from a distant corner of the yard. It was unmistakable: astringent, soapy, with just a trace of licorice.

The doctor confirmed the amazing news. Zicam had destroyed most of my olfactory receptor sheet but not all of it. Enough stem cells remained to grow new cells. Neurogenesis, as this miracle of rejuvenation is called, was believed to occur only in the olfactory system until quite recently, when scientists discovered that baby neurons elsewhere in the brain quickly die, especially as we age. Now scientists are exploring ways those baby neurons might be coaxed to stay alive and prevent or repair the damage caused by disease and brain injuries.

Olfaction is playing a lead role in this effort, and so is the aforementioned fruit fly, whose very simplicity allows scientists to perform the kind of experiments that offer straightforward, unequivocal answers. Smelling is still largely a mystery to science. It has been called the next frontier. In 2004 a Nobel Prize was awarded to the pair of geneticists who found the genes for smell in 1991. Hearing and sight have long since been figured out. But smell, so ancient, is more interwoven with thinking and feeling than any other sense.

It's my hope that we will understand it better scientifically and emotionally, not just because it is a profound connection to our past, but also for the benefit of those who have to go on with their lives as if this grievous loss were no big deal.

Every day as I sniff the damp iron soil in my garden, the lovely, sweet-smelling clematis jasmine vines, the acrid dwarf spruce and spicy junipers, and, of course, the catmint, I remind myself of how lucky I am -- and that this pleasure so often overlooked even by gardeners is still missing from someone else's world.

Bonnie Blodgett is a garden writer and the author of "Remembering Smell: A Memoir of Losing -- and Discovering -- the Primal Sense." She lives in Minnesota.

Bonnie Blodgett is a garden writer and the author of the memoir "Remembering Smell".