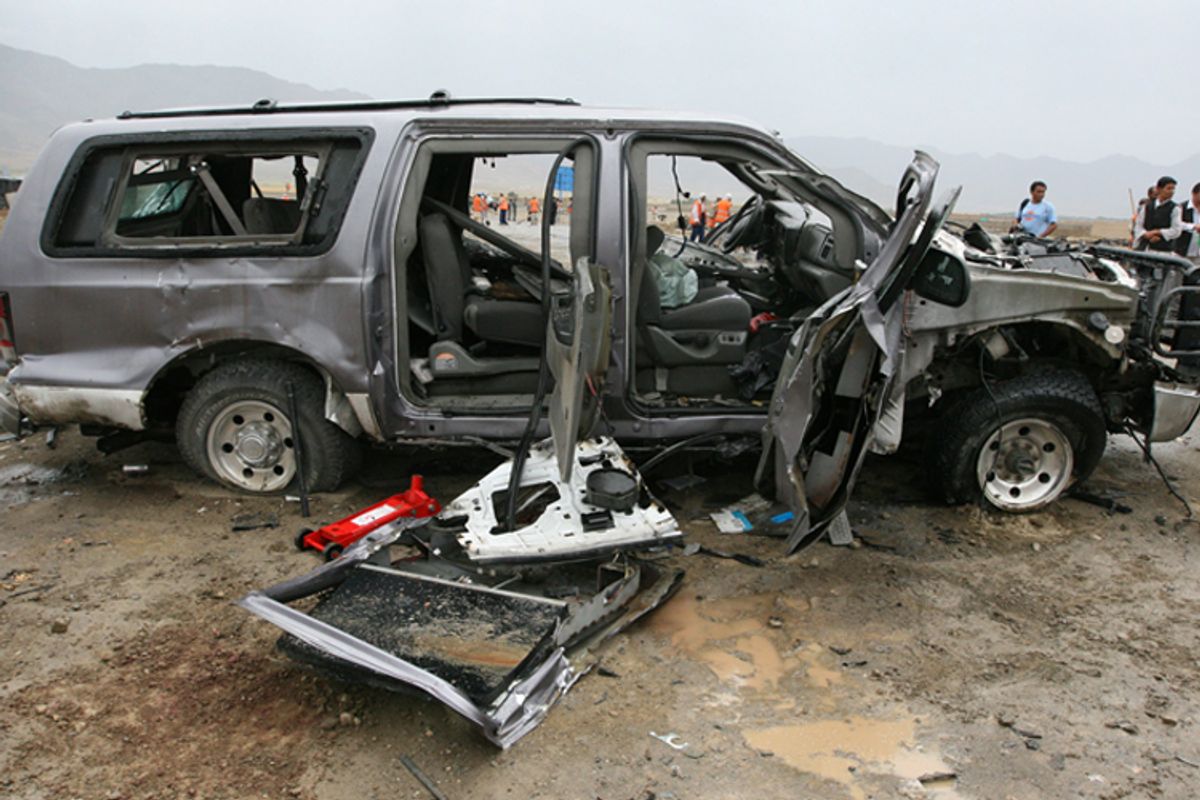 A contractor's vehicle is destroyed after a suicide car bomb attack on the outskirts of Kabul.
--

In one of the least examined aspects of President Obama's escalation of the Afghan war, armed private security contractors are being killed in action by the hundreds -- at a rate more than four times that of U.S. troops, according to a previously unreported congressional study.

At the same time, the Obama administration has drastically increased the military's reliance on private security contractors, the vast majority of whom are Afghans who are given the dangerous job of guarding aid and military convoys, the new Congressional Research Service study found.

In a 10-month period between June 2009 and April 2010, 260 private security contractors working for the Defense Department made the ultimate sacrifice, while over the same period, 324 U.S. troops were killed. In analyzing the numbers, the report found a private security contractor "working for DOD in Afghanistan is 4.5 times more likely to be killed than uniformed personnel."

Unlike when a soldier is killed in action and the military promptly issues a press release describing the circumstances of the death, contractor deaths go almost entirely unreported by the Pentagon, and, by extension, the media. As a result, both the level of violence and the number of people being killed as part of the U.S. effort in Afghanistan are being significantly underreported.

Details about how the private security contractors are dying are exceedingly hard to come by, beyond the fact that the majority were killed while guarding convoys.

The Defense Department told Salon it does not track the names or even the nationalities of the killed contractors, though a DOD official recently testified to Congress that the military's private security contractor force is over 90 percent Afghan.

"We have a very, very rigiorous system of tracking the soldiers and civilians who are killed -- it's publicly released, every single name," Pentagon spokeswoman Lt. Col. Elizabeth Robbins told Salon. "But with contractors, it's up to their contracted company."

Anthony Cordesman, a military analyst at the Center for Strategic and International Studies, told Salon that the Afghan private security contractors guarding convoys can be particularly vulnerable because they often lack the armored vehicles or helicopters that U.S. troops travel in. "The casualties can come from anything from the Taliban, to fights between contractors, to failure to pay local warlords off and an occasional reminder to do that," he said.

Those casualty numbers are likely to continue to rise as the military retains more and more private security contractors. When Obama announced last November that he was sending 30,000 more troops to Afghanistan, for a total of 100,000, the number of armed security contractors had already been surging.

In March 2009, about the time Obama entered office, there were 4,000 contractors working for the DOD in Afghanistan. One year later, in March 2010, there were more than 16,000, according to the congressional study.

Here's a graph of the numbers from the study: