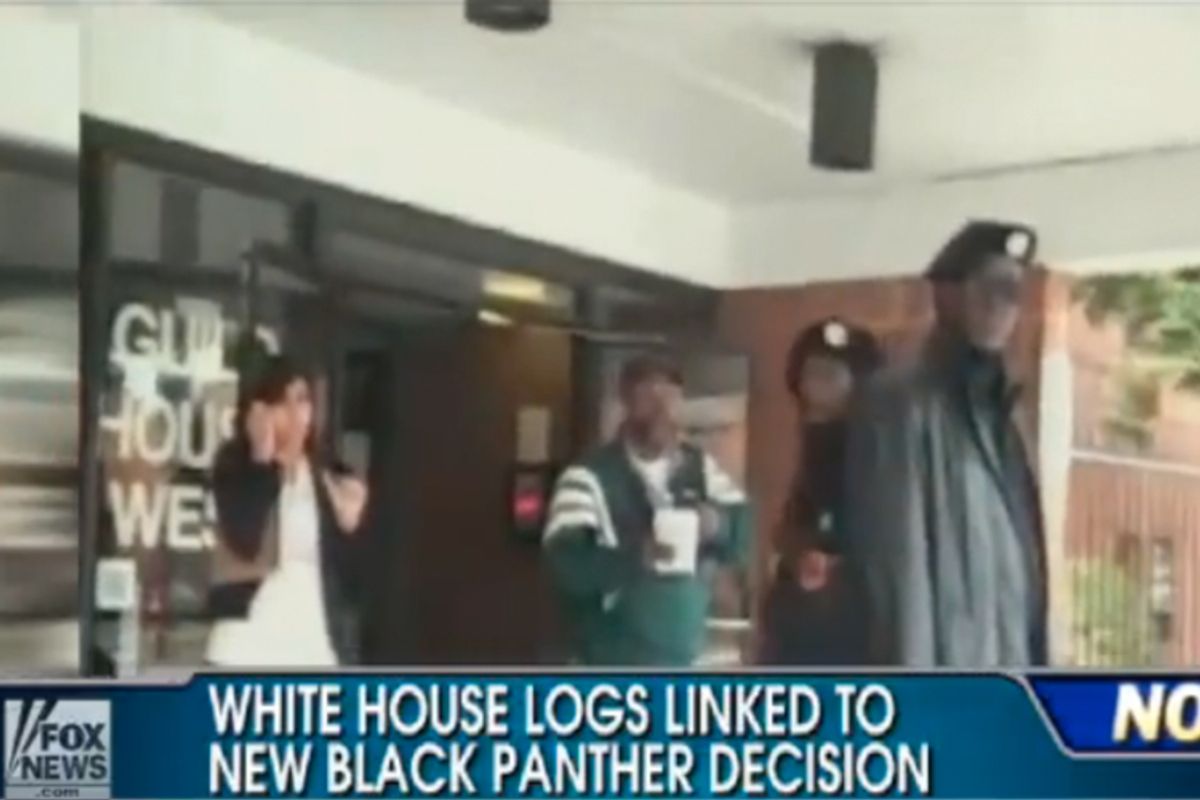 The right, as you may have heard, is all worked up about the Justice Department dismissing voter intimidation charges against members of the New Black Panther Party (whatever the hell that is). Because this was done under President Obama's watch, they claim, it must be racially motivated.

Of course, this is not true -- the Justice Department made the decision to drop the charges while Bush was still in office. But it doesn't matter: The right has managed, successfully, to imply that minorities are out to get white people -- without appearing to be outright racists. This is no isolated matter.

Red State's Erick Erickson has actually suggested that Republicans should make one of the accused Panthers into a "21st century Willie Horton." This is the sort of thing the right's gotten good at not saying out loud (since it sure does sound racist!), but it cuts to the heart of how they've been able to exploit the cultural unease some Americans feel under the Obama administration. When you line it all up, it looks like the right is pursuing a new Southern Strategy.

When talking about racism on the right, we tend to focus on the more overt displays seen at demonstrations and rallies. But those incidents don't have broader electoral effects. The important examples of racially coded language are the ones contained in the stories the right tells themselves about the left. And since Obama took office, many of these stories have involved racial or ethnic identity in some way.

These efforts, at first, were clumsy. There was the whole spate of elected officials unwisely passing around racist caricatures of Obama (a White House watermelon garden, "Barack the Magic Negro," and so on), and the supposed tape of Michelle Obama calling someone "whitey." (Pro tip: claiming your apocryphal black person said things like "whitey" or "cracker" or "I'll speak with your mama" tells those of us who have had actual conversations with black people that you are probably making it up.)

But then came Sgt. James Crowley. The Cambridge police officer's confrontation with Harvard professor Henry Louis Gates, Jr. managed to touch all of the racial live wires that have been festering since the identity wars of the 90s, particularly on right-wing talk radio. And, importantly for the right, this one actually happened. You can't call someone racist for repeating something that occurred, even if it didn't actually occur. Telling a story everyone thinks is true, and letting listeners draw their own conclusions, deflects charges of racism in ways that more specific accusations can't. This reference to reality was the key, the way to exploit anxieties about a black president and the multicultural Democrats without being open to charges of inciting hatred.

From there on, the right has consistently seized on incidents that reinforce the idea of whites as a persecuted class and minorities as alien Others. Now, even issues that don't seem to involve identity at all -- like healthcare or TARP -- are boiled down by the right to cultural concerns. The Democrats, as John Boehner put it, "are snuffing out the America that I grew up in." Whether they're associating non-whites with un-American things like socialism, implying that blacks have gained the upper hand and are abusing their power, or even accusing minorities of being racist, the strategy is consistent.

Of course, since something like the Crowley-Gates incident doesnt' happen often, the right has had to make its own luck, so to speak. One technique they've perfected is to seize on minor incidents and blow them up into telling parables. The Black Panther story is one example of this; so was the strange “a white kid got beat up on a bus!” thing. Alternately, casual comments by public figures who are from ethnic or racial minority groups can be repeated ad nauseum to paint them as un-American, validating the "real America" idea: Van Jones, "wise Latina woman," and so on. And if nothing's floating around, they can always make something happen, like James O'Keefe's bogus ACORN frame-up, or Bob McDonnell's liberal-baiting, slavery-free declaration of Confederate History Month. (That McDonnell's ploy backfired shows that the strategy still hasn't been perfected.)

I'll leave it to others to paint a picture of how this strategy could have horrific consequences for the country. In political terms, however, it seems both effective and fully dialed-in, from Boehner's comments to Glenn Beck's MLK appropriation. And it's a clever jujitsu move. This new Southern Strategy can only work, however, if it flies under the radar. A narrative is being created here, piece by piece, built up from fluffs of nothing into a received truth. It's a truth that exploits our fears and plays on our hatreds. And it is becoming more real every day.