Apparently, one of the nation's top newspapers feels no obligation to conduct basic fact-checking 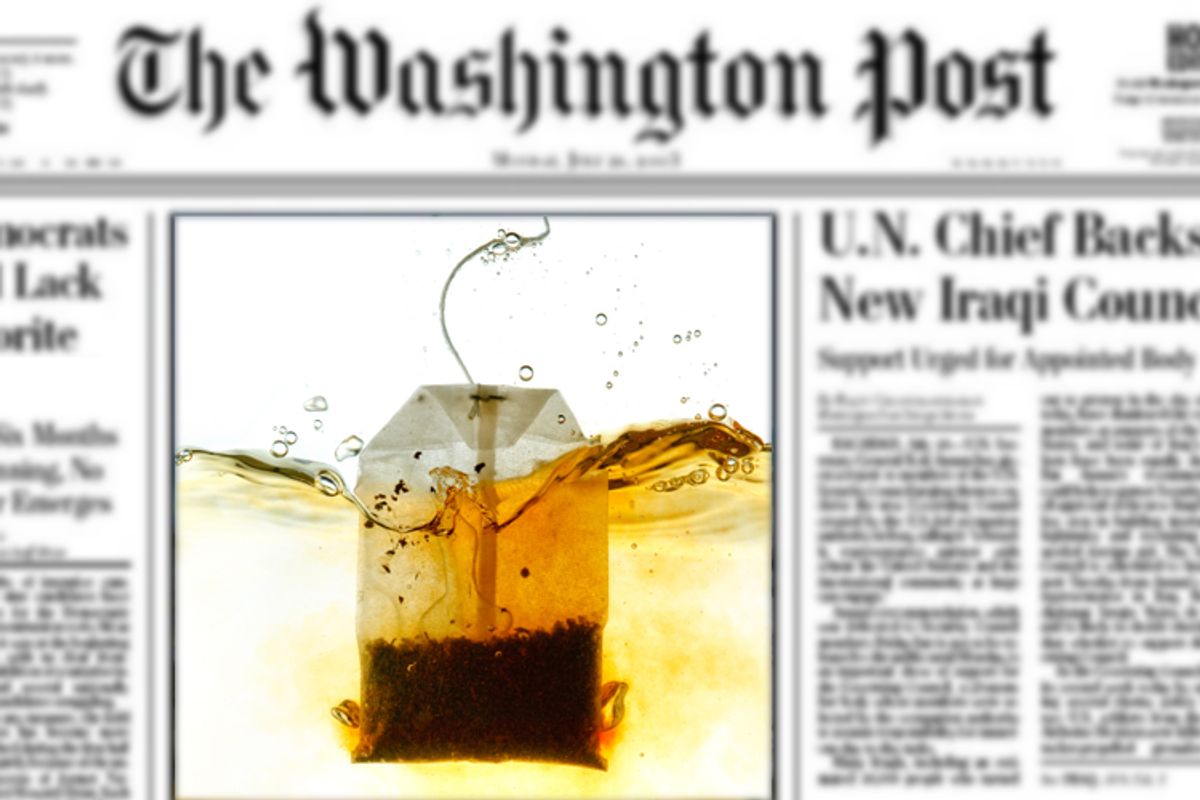 Only a devout Jeffersonian romantic could imagine that human beings govern themselves according to the dictates of evidence and reason. Even so, I've always adhered to the quaint view that journalists should avoid disseminating false information, particularly on the opinion pages. An argument that can't be won without cheating should properly be lost.

Contemporary political journalism, alas, has very little to do with such antediluvian values. Even among Sarah Palin’s so-called lamestream media, the surrender to unreason and partisan tribalism appears to be all but complete. Consider, for example, the Washington Post’s recent publication of an Op-Ed column by Alabama Tea Party congressional candidate Rick Barber.

Barber, who was defeated in a GOP runoff on Tuesday night, nevertheless attracted attention due to a couple of very odd TV and Web commercials in which the ex-Marine is depicted talking to actors portraying George Washington and Abraham Lincoln, among others.

The first ad begins with Barber talking about impeaching President Obama, and maundering on about the "tyranny" of federal taxes while images of men's hands caressing gunstocks are shown, and concludes with an actor playing George Washington saying, "gather your armies" -- a clear incitement to rebellion.

Apparently Barber, who boasts of his devotion to the Constitution, is unaware that President Washington dispatched militia precisely to enforce the payment of federal excise taxes during the Whiskey Rebellion of 1794.

Barber's second commercial features an imaginary conversation with Abraham Lincoln, interspersed with melodramatic images of slaves and Nazi concentration camps. "Hey, Abe, if someone is forced to work for months to pay taxes so that a total stranger can get a free meal, medical procedure or a bailout, what's that called?"

"Slavery," Honest Abe replies. The ad concludes with a phalanx of gun-toting patriots assembling behind Barber.

Again, never mind the dubious political wisdom of invoking President Lincoln, never a favorite in the state billing itself the "Heart of Dixie." In 1861, Lincoln signed the nation's first federal income tax into law to finance the Civil War. Barber clearly knows almost nothing about American history.

Washington Post political columnist Ruth Marcus appropriately described the ads as both "unhinged" and "sacrilegious" regarding the Holocaust. "Decency," she wrote, "demands that some comparisons be off limits."

Not to mention elementary common sense. For reasons known only to them, the newspaper's editors decided Barber deserved a column of his own. As one might have expected, he endorsed what he called "the politics of fear," and doubled down on the crackpot rhetoric.

"Over the past 18 months," Barber wrote "the federal government has sought to seize or has seized control of the health-care industry, the financial industry, the mortgage industry, the automobile industry, student loans, broadband Internet and the energy sector through cap-and-trade legislation. With never a crisis going to waste, each new seizure is rationalized by some new emergency."

"Totalitarianism," he added, "doesn't come all at once."

Alas, we've all grown accustomed to hearing such superheated humbug from right-wing talk radio and Fox News' resident Chicken Little, Glenn Beck. There’s always been a large audience in the U.S. for apocalyptic melodrama. Many of the same people who spent the last decade engrossed in Tim LaHaye's dreadful "Left Behind" novels have turned in their confusion to persecution narratives of the crudest sort.

As the alternative would be to recognize how badly the Republicans failed under President Bush, and how poor a fit GOP policies -- particularly in the realm of taxation and economics -- make with the visible world, many have simply withdrawn from reality. Having lost an election, they complain of tyranny. Hard times evoke tribalized fear. Versions of Barber's mad list appear in letters columns from sea to shining sea.

But a newspaper like the Washington Post used to be owes its readers more than that. Every item in Barber's list of "totalitarian" outrages is sheer make-believe. As Washington Monthly blogger Steve Benen pointed out, "these aren't subjective questions, judgment calls, or matters of opinion -- the observations he states as fact are demonstrably false."

Specifically, the Bush administration bailed out Wall Street banks by lending them money they're obliged to repay -- no government takeover. The Obama administration passed a landmark private health insurance reform. Like it or not, "Obamacare's" less "socialist" than Medicare.

There's been no "nationalization" of the mortgage industry. The auto industry wasn't "seized." The government bought stock in Chrysler and General Motors to save them from collapse; as the market recovers, those shares will be sold. G.M. has already begun repaying its loans. The Internet and "energy sector" are no closer to government ownership than under President Bush.

No doubt most Washington Post readers know all that. Even so, there's no excuse, none, for such downright delusional views to appear seemingly unedited and unrebutted in so prominent a place.