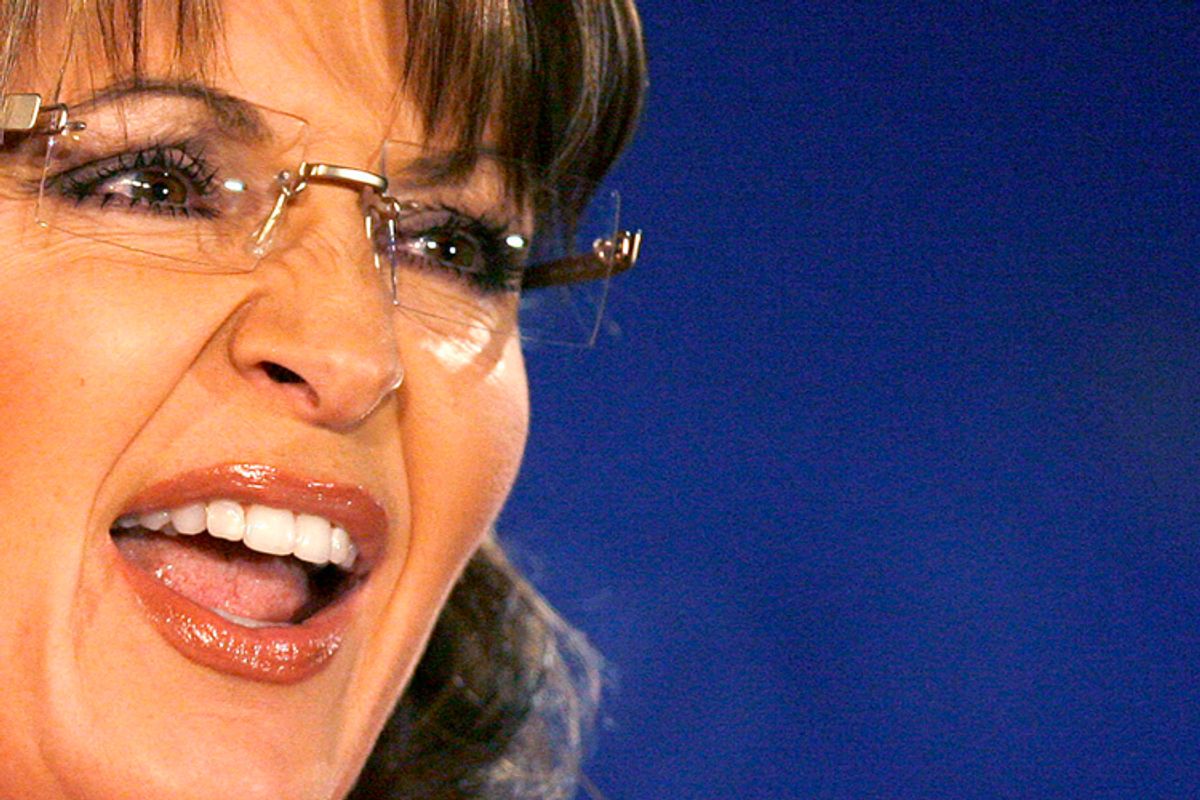 I'm going to violate one of my own rules here. I generally don't like attempts to  frame the pending results of a midterm election as a harbinger for the next presidential election. Midterm and presidential elections are just fundamentally different species, so mixing and matching them tends to produce hollow, shoddy analysis. (The very smart Jerry Skurnik recently picked up on an egregious example of this.)

But when it comes to Sarah Palin and the next presidential race, there actually could be a reason to mix and match 2010 and 2012.

The "will she/won't she run?" conversation has spiked this week, with news that Palin has aggressively stepped up her fundraising and ramped up her organization, assembling (however belatedly) what Politico described as "a political operation befitting someone considering a presidential run."

Palin would, of course, be a truly disastrous general election candidate. But it's not out of the question that she could win the GOP nomination. And in assessing her prospects on the GOP side, I think it's important to keep one thing in mind: Outside of Palin's diehard base, there are plenty of very conservative Republican voters who think very highly of her -- but who will steer clear of her in 2012 if they sense she'd be a doomed candidate in the fall.

This is where the mixing and matching comes in. The outcome in one state this fall could conceivably help shape how those (sort of) pragmatic conservatives think about Palin and '12: Nevada.

The state's Senate contest between Harry Reid and Sharron Angle should be a lay-up for the GOP, but nominating Angle -- whose far-right rhetoric, quirky personal reputation, and distance from her party's establishment essentially make her the Sarah Palin of Nevada -- has complicated things. The other two Republicans who sought the party's nod enjoyed significant leads over Reid in polling, but Angle is barely running ahead of the incumbent (and a new Democratic poll even has her trailing him).

It's entirely possible that, even as they win one key Senate and House race after another, Republicans will lose Nevada this fall -- an outcome that would pretty much kill any chances the party has of picking up the Senate (just as it would return the hated Reid to Washington for six more years).

You'd have to think that this would deliver a powerful message to some potential Palin supporters (and maybe even to Palin herself). With numerous other Republicans in the '12 mix, why risk blowing a similar opportunity in '12 for the sake of making Palin the party's general election face?

Now, consider the flip side. What if Angle ends up winning? More to the point, what if she ends up winning by a solid margin -- an eight-point victory, say, instead of an 80-vote nail-biter? This outcome may be improbable, but it's not impossible, given Reid's current standing in his home state and the desire of Nevada's swing voters to cast ballots against Obama's party. It may be that any of the public's reservations about Angle melt away in the closing days of the race as voters decide that they simply want to be rid of Reid, no matter whom he's running against.

This could conceivably embolden the right (and maybe even Palin herself). After hearing for months from the media and giddy Democrats about how dumb and suicidal their party had been in nominating Angle, they'd be getting the last laugh. Instead of looking at Angle's fate and grudgingly admitting (to themselves, if no one else) that Palin would make too easy a mark for Democrats, the right might conclude that they could get away with nominating her. (I'm not suggesting that this would be a valid conclusion. For a variety of reasons, an Angle win, which really is quite possible, won't say anything about Palin's general election prospects in '12. But I could see the right treating it like it does.)

Angle, it should be noted, isn't the only Republican Senate candidate this year who's complicating the party's chances in a very winnable race. Rand Paul is doing the same thing in Kentucky, and so is Marco Rubio in Florida, and (if he wins his party's nod in Colorado) Ken Buck, and on and on. But the circumstances of the Nevada race invite the most obvious parallels to a potential Palin-Obama contest in '12: an incumbent Democrat, a swing state, and a female challenger with far-right views whose own party establishment fears her.

It's tough to find a precedent for the role that the Nevada race could play in shaping the right's attitudes on Palin for '12, simply because it's very unusual for a party to take the kind of risk that Republicans are now taking in Nevada.

There's a sort-of parallel in the 1978 New Jersey Senate race. In the GOP primary, Jeffrey Bell, a right-wing speechwriter for Ronald Reagan, shocked four-term incumbent Clifford Case. Nationally, it was a GOP year, but Bell was a poor fit for New Jersey and lost in the fall to a newcomer named Bill Bradley. In theory, conservatives might have regarded that result as a warning about the wisdom of nominating Reagan for the presidency in '80, but they didn't -- and for good reason.

Reagan, unlike Palin now, was already the one to beat for the '80 nod when Bell lost. He'd come within an inch of the 1976 nomination and, again unlike Palin, had emerged from the previous national campaign with his image enhanced. Plenty of Republican establishment figures doubted Reagan could win a general election, but the right-wing of the party was united behind him. For them, it was a single-candidate race: There was Reagan and no one else. (Besides long-shot Rep. Phil Crane, all of Reagan's '80 primary opponents -- George H.W. Bush, Bob Dole, Howard Baker and John Anderson -- were to his left.)

Palin's grip on the party's conservative base is far less established and she has far more competition for its loyalty. Plus, for all the questions about his electability, Reagan was a far more credible general election prospect for pragmatic conservatives than Palin is today. So Bell's loss meant nothing to the right and the GOP went ahead and nominated Reagan, who then won 44 states (including New Jersey) over Jimmy Carter.

[And no, that's not a precedent that suggests Palin could do the same in a 2012 general election; we've already seen how non-GOP base voters responded to her act during a national campaign.]

Of course, it could be that Palin has already made up her mind. Maybe she's going to run no matter what her prospects seem to be. Or maybe she's already decided to sit it out -- better not to risk a humbling loss that could diminish her stature and undermine her money-making magic.