From high-stakes challenges to egocentric chefs, the 7th season shows why Bravo's culinary contest is king 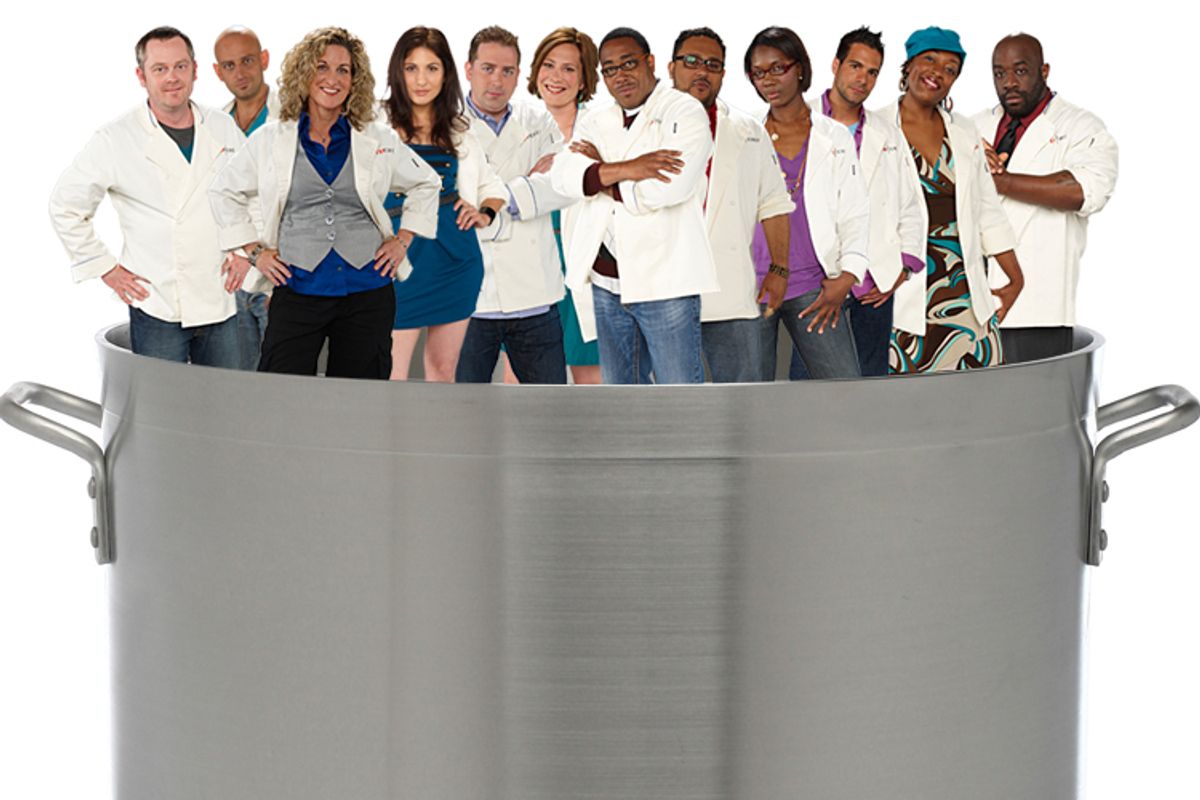 Most reality TV shows get old eventually. Even the very best shows of the genre – "Project Runway," anyone? – fall apart as the producers get bored or create product-sponsored challenges or try to spice up the cast with aggressive wild cards, hoping that a few Jerry Springer-style outbursts might give their show a little "Jersey Shore"-style shot in the arm.

"Top Chef" (Wednesdays at 9 p.m. on Bravo) is one notable exception. Despite recent discussions over whether or not the show has lost its edge, the seventh season of "Top Chef" has proven beyond a shadow of a doubt just how resilient and dynamic the popular cooking competition is. Thanks to a combination of smart casting and daring new challenges, the show started at a slow simmer and has rapidly heated to a rolling boil in the past two episodes.

First there was the unexpected tournament-style elimination last week, in which teams of two competed in breakfast, lunch and dinner rounds and the least successful team was brutally eliminated at the end (It's hard to imagine Arnold "not just a Louis Vuitton bag" Myint leaving this early if not for his ill-fated pairing with eternally flustered Lynne). Then, on Wednesday night's episode, the cheftestants were asked to prepare a meal together in a chilly cow pasture. Tempers flared, meat cooking times were second-guessed, alpha males clashed, and a bowl of cauliflower tumbled into the tall grass below.

At judges' table, none of the judges held back on their true feelings about the worst dishes. Tom Colicchio fired off his usual deadpan gripes about lackluster flavors and foolhardy choices. Padma Lakshmi matter-of-factly declared several dishes inadequate. Hell, even the usually sunny and forgiving Eric Ripert scoffed at the worst dishes like they weren't fit to touch his plump French lips. The previously cocky Amanda got called "amateurish." Steven's salad was scolded as "overthought and overdressed." But it was the eminently likable Timothy's bland turnips and overall shaky performances that underwhelmed the judges the most, and he was sent packing.

Although some readers have argued over the years that "Top Chef" doesn't work because viewers at home can't taste the dishes along with the judges, this might actually represent what works about the show. Thanks to our inability to taste, the descriptions and the personalities and the track records of the cheftestants add up to something better: a guessing game. A few episodes into the season, it's hard not to find yourself wagering on which risks will pay off and which won't. When the outspoken but able Kelly started to throw together a bonus-round strawberry rhubarb dessert on Wednesday night, it might've been the kiss of death for another competitor on another season, but Kelly's choices have generally been pretty sound, so we suspected that she'd hit it out of the park – and she did end up in the top four.

And while it's often easy to tell which three or four cheftestants will make it to the end by the second or third episode (last season, you could've put money on one of the Voltaggio brothers winning after the first ten minutes of the first episode), it's still entertaining to see which of the favorites will win each week. This season, the Kenny "The Beast" vs. Angelo "The Bitch" showdown has proven to be endlessly entertaining, whether the two men are embracing utterly different strategies in the Quickfire Challenge or openly yelling at each other when forced to collaborate in the Elimination.

Angelo presents an obvious villain – albeit one with a little less flair than, say, Hung Huynh, the ultra-confident winner of season three. But what Angelo loses in style points, he makes up for in sheer unpredictability. Having admitted that he has a little thing for Tamesha, a young chef from Barbados, Angelo proceeds to describe her cherry compote as "really tart and luscious -- I mean it's just super sexy." Got it. But nothing is sexier than what Angelo is doing with his duck. "I'm working on the duck, I butchered it perfectly, I marinated it, I rendered out the fat, I let it rest, I cooked it more. I basically made love to that duck, to be honest with you."

Sure, we feel a little sorry for the duck – but you have to love a show that brings out this kind of freakishly passionate streak in a person. It's no wonder love is in the air. Not only is Angelo following Tamesha around and whispering in her ear, but the formerly obnoxious Ed, who doesn't hold back in outlining the bad choices of his competitors, is now swooning over Tiffany, a pretty Texan with great laugh.

Budding romance, temperamental outbursts, ruthless judges, bestiality – what more could you ask for in one show? Unlike some of their competitors, the producers of "Top Chef" have made all the right choices over the years, maintaining the elements of the show that we depend on (Judges Colicchio, Lakshmi and Gail Simmons are never far from the action; the Restaurant Wars episode is always one of the best) while mixing things up to keep the stakes high (luring in truly respected chefs to judge competitions, dishing up increasingly difficult and brutal challenges). Throw in a skilled but also wildly emotional cast of characters this season, and you've got a truly satisfying flavor profile.

On the other hand, maybe chefs are just the kinds of people who belong in front of the camera: They're passionate, they're hotheaded, they drink a lot, and they live or die over the acid balance of a little plate of fish. You might not want to work for them (or, if you're a duck, go within a few square miles of them), but they're endlessly entertaining to watch on TV.