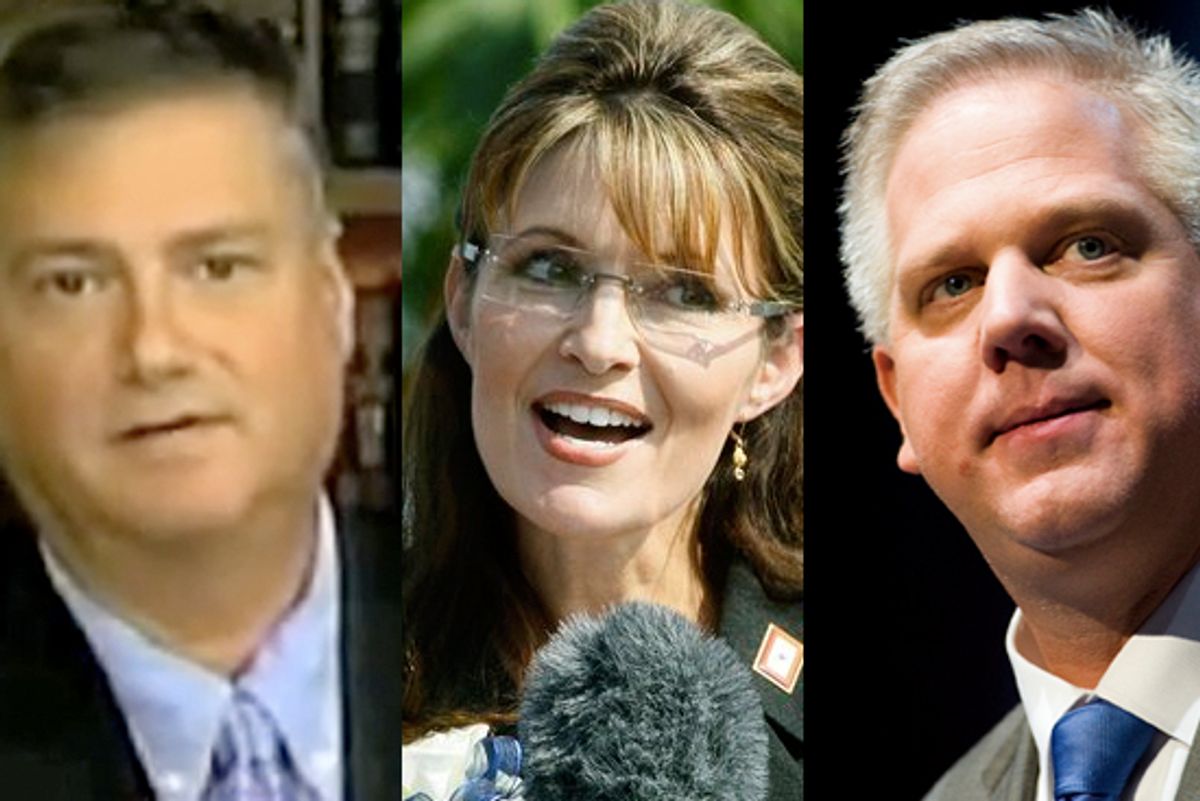 Ben Jealous, give it up. Your organization, the NAACP, is no longer needed. How do I know? I read it in a press release today from a group of "Nevada Conservative Leaders and Grassroots Activists," which told me that "In 2010, the NAACP has outlived its usefulness." Thanks, white people!

A lot of white conservatives are upset with the NAACP this week for daring to talk about racists in the Tea Party movement. The group passed a resolution asking the Tea Party to condemn the racists in its midst. It didn't denounce the entire Tea Party, as simple-minded folk like Sarah Palin have claimed; it merely tries to take supporters at their word that only a tiny fringe of the movement harbors any racist sentiment, by asking those supporters to denounce that fringe. What's the problem?

Palin took to her Facebook page to explain what the problem is. After consuming many paragraphs of Palin's tasty word salad, I'm still not sure what she's saying, except that Todd is part Yupik Eskimo, she and Todd and his family just spent some time together, and how dare the NAACP introduce race into our political debates when she's just fresh from a nice visit to an Eskimo village? She did quote from "Jesus loves the little children," though:

The only purpose of such an unfair accusation of racism is to dissuade good Americans from joining the Tea Party movement or listening to the common sense message of Tea Party Americans who simply want government to abide by our Constitution, live within its means, and not borrow and spend away our children’s futures. Red and yellow, black and white, this message is precious in all our sights. All decent Americans abhor racism. No one wants to be associated with any organization that is in any way racist in sentiment or origin. I certainly don’t want to be. Thankfully, the Tea Party movement is not racist or motivated by racism. It is motivated by love of country and all that is good and honest about our proud and diverse nation.

Glenn Beck jumped in today, though his comments were relatively mild, and I don't think he cried.

Now, the NAACP adopted a resolution condemning the racist elements of the Tea Party. Well, I'd do that, too, if I knew where they were…. They should be discredited if there are racist people in the Tea Party. They should be discredited. I will help you do it. Where are they? Stand in truth and the truth is the movement is not about race. It's reducing the size and scope of government.

The St. Louis Tea Party has been riling its membership to protest the NAACP's move, even suggesting the group should lose its tax-exempt status for condemning racists in the Tea Party. St. Louis Tea Party organizer Bill Hennessy even argues that the Tea Party movement has more to offer African-Americans than the NAACP. "When you look at the crime and poverty and family breakdown of the African-American community ... you see a half-century of failure by the NAACP," he wrote on the group's Web site. "None of those persistent problems was caused by the Tea Party movement, yet the principles of the Tea Party are exactly what's needed to wind down the multigenerational destruction in the African-American community. The NAACP was once a vital weapon in the war against segregation and oppression. All that's left is a bigoted and malicious shell that does far more harm than good for people who need a break." The Nevada conservatives' statement goes one better: "Their latest public comments identify the NAACP as one of the few remaining bigoted and racist organizations in the United States.

But the ever-vile Mark Williams, a spokesman for Tea Party Express Inc., outdid all of his right-wing colleagues, comparing the NAACP to slave traders when it comes to exploiting blacks:

You're dealing with people who are professional race baiters, who make a very good living off of this kind of thing. They make more money off of race than any slave trader ever. It's time groups like the NAACP went to the trash heap of history where they belong, with all the other vile racist groups that emerged in our history.

Then Williams outdid himself, with a mock letter to President Lincoln from Ben Jealous, asking for a return to slavery:

Colored People have taken a vote and decided that we don't cotton to that whole emancipation thing. Freedom means having to work for real, think for ourselves, and take consequences along with the rewards. That is just far too much to ask of us Colored People and we demand that it stop!... Perhaps the most racist point of all in the tea parties is their demand that government "stop raising our taxes." That is outrageous! How will we Colored People ever get a wide screen TV in every room if non-coloreds get to keep what they earn? Totally racist! The tea party expects coloreds to be productive members of society?

Nope. There aren't any racists in the Tea Party movement. Will any Tea Party leader condemn Williams? I'm not holding my breath. Sarah Palin?

A footnote: The Nevada conservatives' press release says their brave anti-NAACP statement will go up on the website actionisbrewing.com, on Friday. If you go to the site now, you'll get a boatload of information about their feud with the Tea Party of Nevada. These groups feud a lot: Remember how the whole Tennessee Tea Party movement (roughly 42 different groups) splintered over Judson Phillips' for-profit Tea Party Nation (which paid Palin $115,000 to headline)?

Word to the Tea Partiers: You could learn from the NAACP, which has survived 101 years, despite plenty of strife from within and without. Tea Partiers seem so fractious they could kill their own movement before the voters get a chance to reject them in November.