Steve Jobs offers new cases and refunds, and tells the media to stop making such a big deal of reception problems 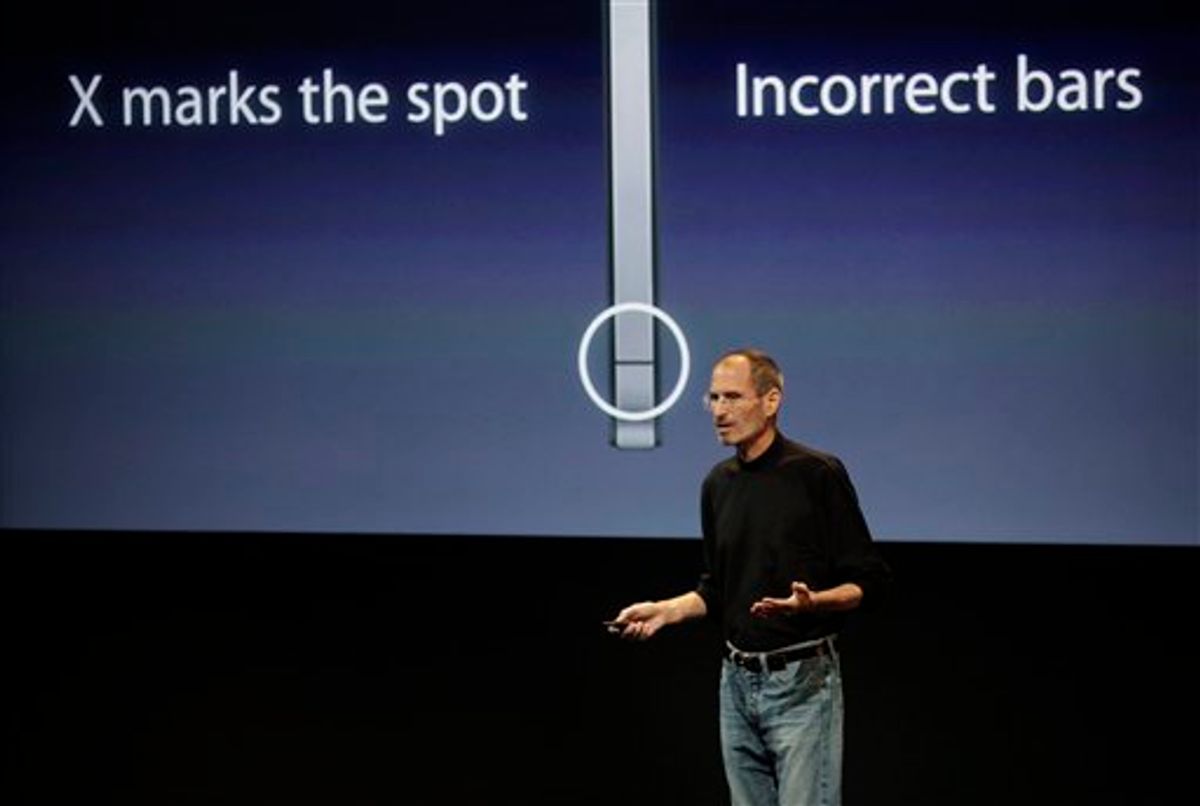 Here, in a nutshell, is Apple's defense in the so-called AntennaGate affair:

Our customers love the iPhone4, and everyone else has the same problem, so shut up already, media. But because we're so generous and customer-focused, we're giving all iPhone4 buyers a free "bumper" case (and a software update) that makes everything hunky-dory.

OK, that's a bit oversimplified. But not by much.

Apple brought a small group of selected journalists (given what I've said about Apple lately I was, unsurprisingly, not invited) to Apple's Cupertino headquarters for an event that is unlike any I can remember in the company's history: an attempt to slow if not halt the deluge of bad press the iPhone4 has been getting over the reception problems buyers of the new device have discovered in the real world.

Apple has been taking enormous heat -- sometimes fairly and sometimes not -- for the iPhone's flaws. Based on the amount of coverage it's received, you might imagine that the iPhone is about an order of magnitude more important than, say, the financial "reform" law that has made its way through Congress. (The New York Times' Nick Bilton wrote, "It's Just a Phone," but that, too, was part of the massive coverage, right?)

On the Apple stage Friday morning, ﻿CEO Steve Jobs tried to make a case that a) the problem isn't bad in the first place; b) it's a common one in the industry; and c) we should all just stop talking about it.

Regarding the first point, for example, Jobs said half of 1 percent of new buyers called to complain about the reception problem. I'd call that a huge percentage. Most people don't call support in the first place. And the early adopters of the iPhone are surely predisposed to wanting to be happy with their decision.

I'm more inclined to cut Apple a bit of slack on the second point. There is clearly an industrywide issue with reception, but I'm not persuaded at all -- especially after the Consumer Reports testing -- that the iPhone4 experience is typical. I'd like to see a much broader research effort by Consumer Reports and other unbiased testing agencies on this, so we really understand what's happening.

But Jobs was admitting, at the same time, though he didn't put it this way, that Apple didn't do sufficient testing of the new phones. (So, by the way, was Consumer Reports admitting that it didn't do sufficient reporting when it first recommended the phone, only to unrecommend it later.) This is an inevitable consequence of maintaining a corporate culture of such secrecy and paranoia -- wanting to spring new products on the world with the maximum amount of hype, an Apple phenomenon that journalists serve so well with their long-standing adoration, only now being tested.

Give Jobs some style points for unintended irony in calling Apple "totally transparent." But was he taking a subtle jab at AT&T to mention that the carrier keeps dropped-calls data a secret? Pot, meet kettle.

Apple's insistence that the media are blowing the situation out of proportion is a matter of opinion, of course. I tend to agree that the antenna issue is not exactly earthshaking, but Apple's claims of near-perfection -- its new devices are magical, remember? -- leave the company more open to the perception of failure than would otherwise be the case.

The entire affair reminds me of the Intel "Pentium Bug" fiasco back in the 1990s, when Pentium chips were found to have small flaws in the way they handled certain calculations. Intel executives believed the flaws were not important enough to matter, but public concern snowballed and the company -- doing the right thing belatedly -- did an expensive recall.

Perhaps, given its industry-leading position these days -- a long, long way from its earlier days as an underdog -- Apple is beginning to realize that it has to be more forthcoming than it's been in the past. That would be a wise realization, though an unlikely one as long as Jobs is in charge.

Meanwhile, it's updates and bumpers for all! Well, for some, anyway.