Will the rules apply to Sarah Palin in 2012?

When it comes to the GOP presidential race, she may not be such a supernatural force 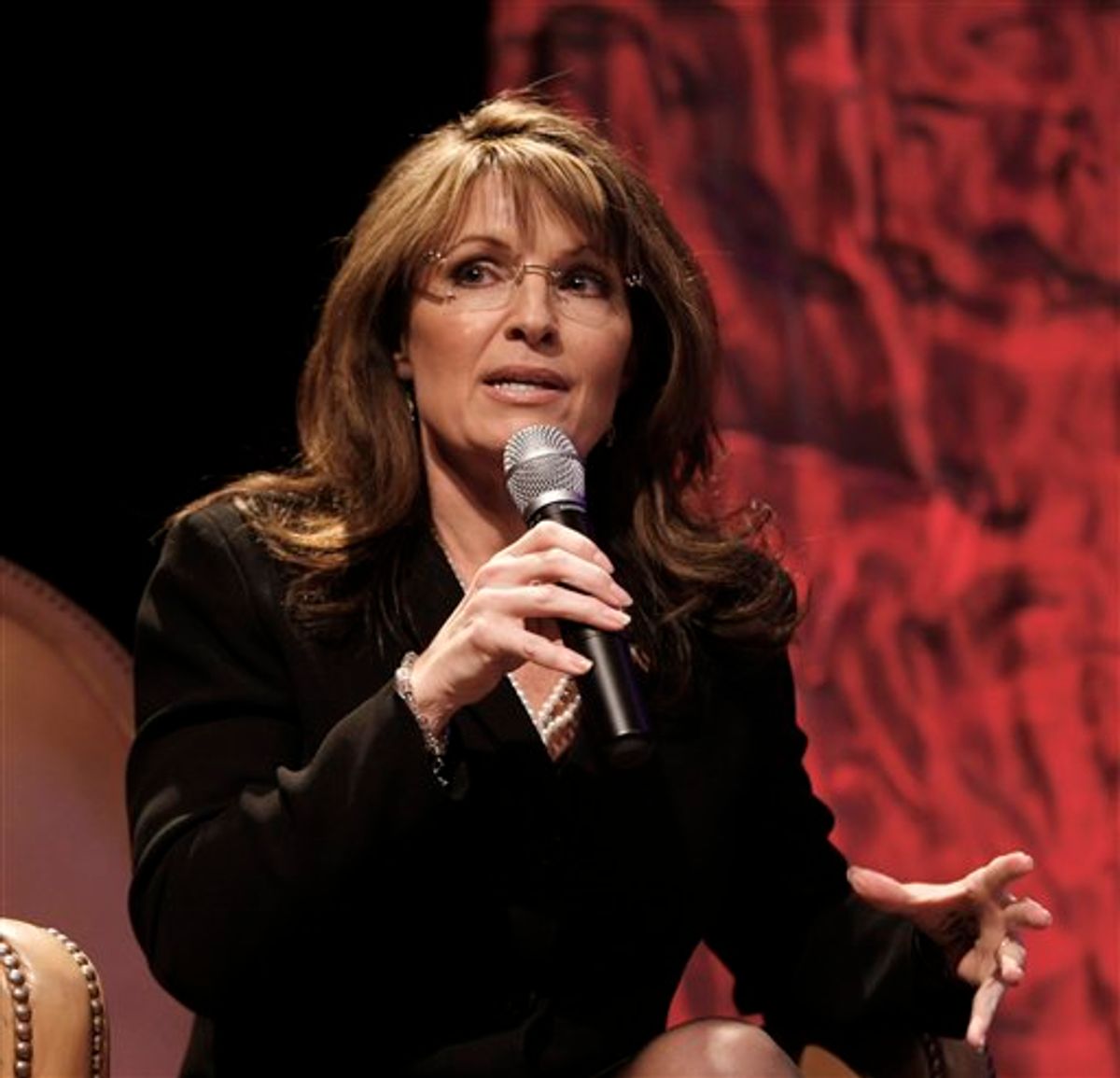 FILE - In this Feb. 6, 2010 photo, former vice presidential candidate Sarah Palin addresses attendees at the National Tea Party Convention in Nashville, Tenn. When the Tea Party Express pulls into the city where the conservative movement got its name, the crowd will be as notable for who is not there as who is. Palin is the keynote speaker on Wednesday, April 14, 2010, but Republican Sen. Scott Brown, whose January election the movement claims as its proudest accomplishment, is skipping the event. (AP Photo/Ed Reinke, File) (AP)
--

This originally appeared at A plain blog about politics.

Speaking of Dave Weigel, I think he misreads liberals and half-misreads the presidential nomination process in his reaction to this claim by Mark Halperin*:

[Palin's] candidacy would require almost none of the usual time sinks that force politicians to jump in early: power-broker schmoozing, schedule-intensive fundraising, competitive recruitment of experienced strategists, careful policy development. She would have immediate access to cash, with even small Internet donations likely bringing in millions.

First, liberals. Weigel says, "You read that if you're a liberal who cannot stand this woman (but clicks on every article about her), you wonder what the hell Halperin is talking about." Really? I don't think so; I think most liberals are perfectly happy to believe that Republicans would nominate Sarah Palin -- first, because they think she would be easy to beat, but more so because it would only confirm (to them) that Republicans are dolts.

Halperin is right about Palin in the media that's going to actually cover the 2012 election. This media is not going to care about her policies. If policies come up during debates, and she gives the same answers she gives on Fox now, and Mitt Romney pounces on her, the story will not be that the GOP's frontrunner gave a pallid answer. The story will be that Mitt Romney pounced. What does this do to his image? What does Mike Huckabee have to say about it?

And so on. It's hard to imagine Palin competing at the policy level the press claims she needs to get to, but easy to imagine her competing at the level they actually play on. Quick, cast your mind back to the countless 2007/2008 Democratic debates. Do you remember Hillary's mastery of policy? No. You remember her fumbling an answer on drivers' licenses for illegal immigrants, you remember Obama telling her she was "likable enough," and perhaps you remember Dennis Kucinich talking about aliens.

As I said, I think this is half-right. Yes, Palin will have little problem clearing the hurdle of debates, per se. However, look back at the first thing that she'll supposedly be able to skip: "power-broker schmoozing." No, I don't think so. If she really runs as an insurgent against Republican Party power brokers, her campaign will be DOA. She's not going to be able to get away with snubbing...let's see...local pols and party people; interest group leaders; conservative talk show hosts; conservative opinion leaders. Right now, there's really no reason for any of those people to be critical of her or any other 2012 candidate, but once we move further into campaign mode next year, if she really snubbed them, then we'd start hearing more and more negative stories about her within the conservative media. In fact, she almost certainly has to do better than just not snubbing them; she's going to have to convince most of them that she's no threat, and at least some of them that she's the best choice.

Yes, I know, she's very popular with a core group of Republican primary voters right now. It seems as if they're safely within her corner. But, really, it's an illusion. Just think of all those Democrats who were die-hard Hillary Clinton lovers throughout the 1990s and, well, up to winter 2007-2008 who wound up just bitterly against her if they happened to pick Obama (and have now returned to her camp post-election). These attachments feel strong, but they're really not, except for a very, very small group. It's very easy for any conservative to be a Palin supporter today; it's a lot different to be a Palin supporter against what Rush says, against what Beck says, against what the NRA and the Club For Growth say, against what organized activists say, if it should come to that. I really don't see any evidence that she's any more immune to that effect than anybody else. That's not to say that she can't be nominated, because I have no idea whether she can win the support of party leaders. I am confident, however, that she can't win the nomination without them. So the real question, and one for which Weigel should have some expertise, is: What do those folks want from their candidates? Are they willing to support a candidate who doesn't know the issues? Do they think they can trust her if she gets elected? Those are the real hurdles she has to get over.

*I should mention, as long as I linked to the piece, that 1) a two-minute video cannot, in fact, reshuffle the Republican presidential race, and 2) Palin could not, in fact, decisively influence the outcome of the midterms.