The gods are angry at Steve Jobs 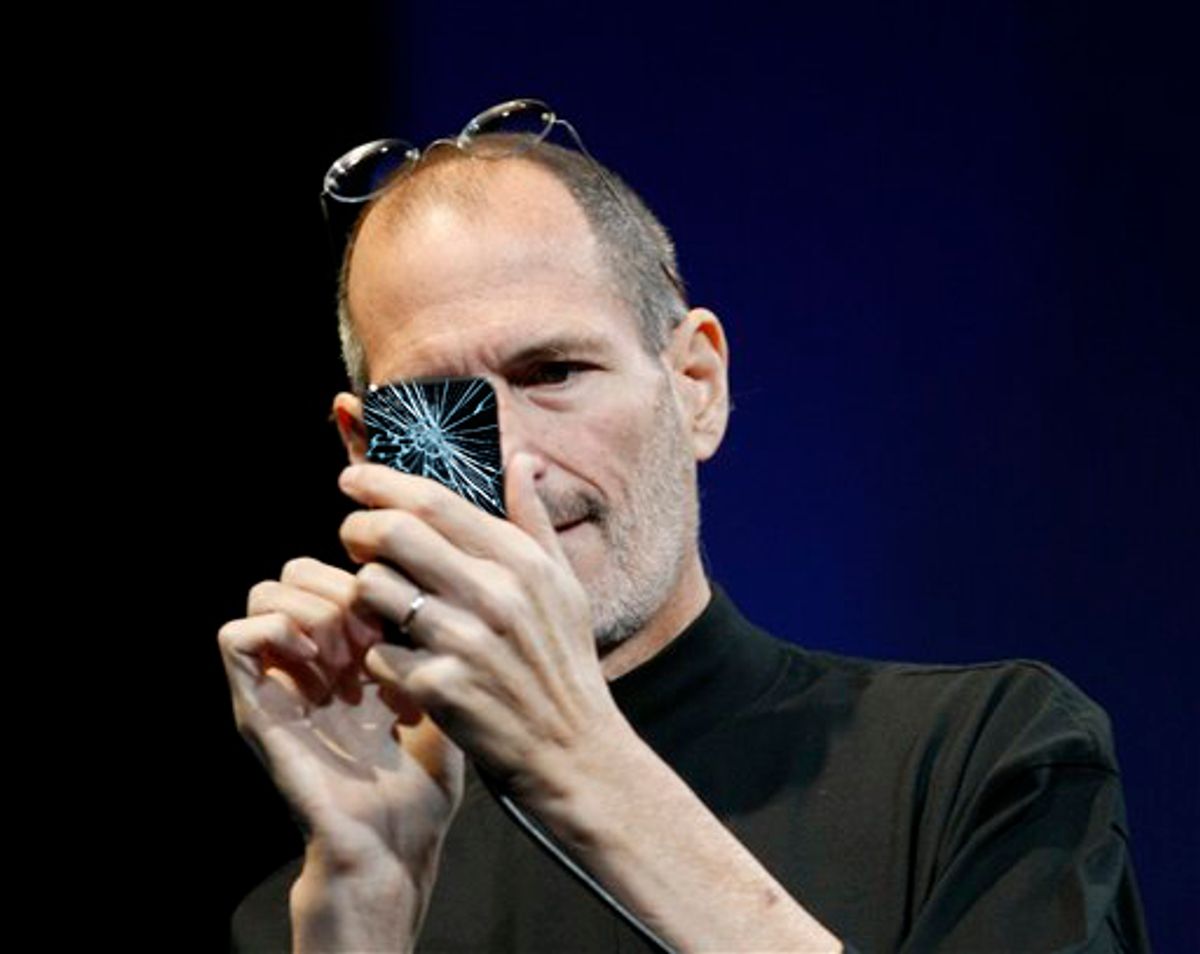 Salmoneus, ruler of Elis, was a wealthy and unjust prince with an arrogant heart. He had founded a beautiful city and called it Salmonea, and he grew so overbearing in his pride that he commanded his subjects to give him the honors and offerings due to a god. He wanted to be taken for Zeus himself, and he traversed his country and other parts of Greece in a chariot meant to resemble that of the Thunderer. To accomplish this, he tried to imitate lightning with torches launched through the air, and thunder with the hoof beats of champing horses which he drove over a brazen bridge. He even had people killed and then pretended that his lightning had struck them down. From the heights of Olympus Zeus noted his folly. He reached into the thick of the clouds, drew forth a real thunderbolt, and hurled it at this mortal, raging in madness and insolence below. The bolt shattered the king and destroyed the city he had built with all those who dwelt in it.*

Maybe it's unfair to recast the saga of Steve Jobs and the call-dropping iPhone 4 as a Greek myth that requires only one paragraph to define the concept of hubris better than the work of a thousand classics scholars. I will also concede that it is a bit of a stretch to imagine Consumer Reports in the role of Zeus, hurling a thunderbolt that rocks Apple to the core in the form of a negative recommendation against buying the company's latest iteration of its world-altering smart phone.

But given the way the technology press and blogosphere have responded to Consumer Reports' Monday bombshell, I wouldn't be at all surprised if I drove by Apple's Cupertino headquarters and saw nothing but a pile of smoldering rubble.

The iPhone 4 has a flaw, and the entire technocultural matrix seems to have had an aneurysm. Microsoft executives are turning cartwheels. Longtime Web pundits are predicting the end of Apple's iron control over the mainstream tech press, and Bloomberg and Wall Street Journal reporters are breaking breathless scoops about how Apple executives may have known that the iPhone 4 had a problem before the company released it to the public -- as if the fate of millions of lives or the control of Congress hinged on the "what Steve Jobs knew and when did he know it" question. A wary nation awaits an unprecedented Friday press conference from Apple in a state of barely restrained frenzy. Will Apple announce a recall of the iPhone 4? Will the company distribute free "bumpers" to the iPhone masses to fix its antenna problem? Will Steve Jobs get down on his knees and beg forgiveness for his sins?

If only Steve Jobs had never sent that fateful e-mail telling a correspondent her iPhone connectivity problems would be solved if she just avoided "holding it that way." Karma is a bitch, and when Jobs hit "send" on that missive he was all but begging Zeus to get mythological on his ass. There may be some truth to the theory that Jobs' megalomaniacal desire to control every aspect of Apple's operations created a version of the famous Jobsian reality distortion field that ended up disconnecting Apple from the real world. Arrogance works when you never make a mistake, but as soon as you stumble, your enemies pounce!

That being said, it is ridiculous, I think, to imagine that this particular misstep signals any kind of profound alteration in Apple's glorious arc.

Dave Winer predicted on Wednesday that Apple's "run as the Exceptional Company is about to end."

Winer's reasoning: We the people don't like corporations anymore, Apple has a terrible P.R. operation, and the company is way overdue for a hype implosion, since it's been on a winning streak since 1997.

But this thesis ignores the real reason why Apple enjoyed a winning streak in the first place: The company produced a string of products that people wanted to buy. The whole theory of Apple's censorious control over the mainstream media falls apart when one recalls that dating as far back as the iMac, new Apple products tended to get a very skeptical reaction from the mediaverse. Why would people pay a premium for the iPod, when there are so many cheaper competitors? What business did Apple have getting involved in phone manufacturing? Even the iPad was greeted with quizzically raised eyebrows at first glance.

One cannot deny that Apple's cavalcade of hits created a self-fulfilling virtuous cycle. I'm sure that many of the millions who rushed to buy the iPhone 4 did so out of a blind faith that the newest Apple offering would be just as great as the last six. But it's going to take a lot more than one botched antenna design to shift Apple's course from world domination back into declining also-ran.

That is, provided Steve can restrain himself from any more obnoxious e-mails "raging in madness and insolence," of course. If he keeps that up, Zeus has plenty more thunderbolts handy.

* From Gustav Schwab's "Gods and Heroes: Myths and Epics of Ancient Greece."