The whys and hows of cooking with liquid nitrogen

And why you'll be seeing it in your kitchen soon. Plus, a four-star chef's way to eat milk 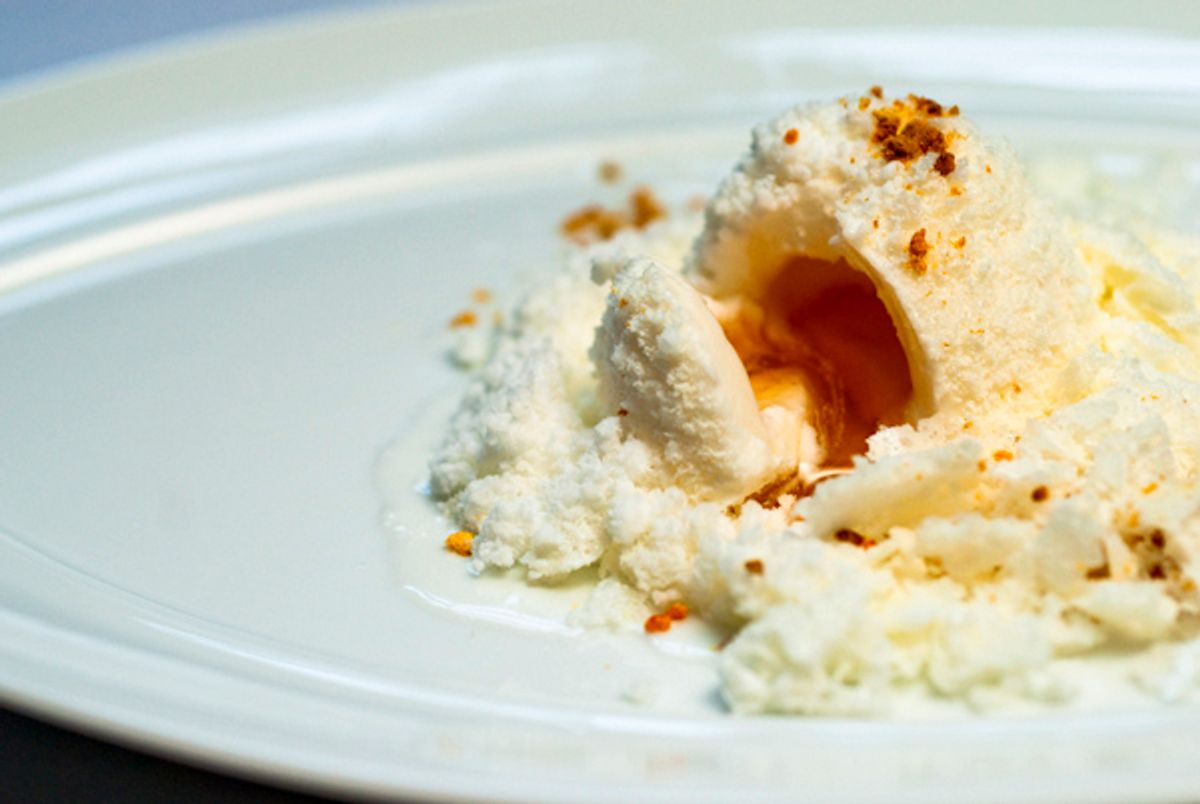 It used to be that any time someone on "Top Chef" or "Iron Chef" busted out the liquid nitrogen, smoking cold and evil-looking, there would be screamin' and hollerin'. "What in tarnation!??!" people would say, as the witches and warlocks on the tee-vee turned liquids into solids with a tip of a jar. But now you can hardly get through an hour of cheftastic programming without seeing it. And with its ability to instantly freeze anything we would ever want frozen -- and plenty more we never thought could be frozen -- the stars are aligning: Liquid nitrogen is headed for the mainstream, and it might not be terribly long before you'll find a nice dewar of the stuff bubbling away in your own kitchen.

The idea of using liquid nitrogen in food is not actually new; there are reports of ice cream made with it in the 1800s. And if you want a sense of how old it is in the modern era, take a look at this website, which leads off by claiming to be "the first Liquid Nitrogen Ice Cream page on the Internet." When's the last time you saw a website that claimed to be the "first whatever we are on the Internet"? Right, around the time people started using the Internet.

Of course, most references we see to cooking with liquid nitrogen now are in the context of cutting-edge, innovative chefs -- or, to detractors, purveyors of mere novelty. The first time I saw it, about four years ago, it was used to make popcorn that dissolved into the distinct, fruity flavor of excellent olive oil. The chef, Dani Garcia, loaded up a soda siphon with olive oil and shot it into a steaming Styrofoam box of liquid nitrogen. It solidified instantly, the air in it giving it a popcorn shape, and he served it as a trompe l'oeil. (He also infused it beautifully with tomato water, which is what you get when you wrap cut tomatoes in cheesecloth and let them drip, but that's another story.) It was delicious, and I'd eat it any day from here to eternity, but it's unavoidable that the most striking aspect of the snack was novelty: "Wait, oil can freeze?" I heard people say between the oohs and aahs.

But, as with many new technologies, the key to mainstreaming is to get beyond novelty, for people to use it in ways that integrate with the familiar. And I saw that the other day, in the dining room -- and then the kitchen -- of Eleven Madison Park.

The restaurant's cuisine -- which earned it a rare four-star review from the New York Times -- is renowned for refinement and creativity, but grounded in traditional, relatable flavors. The dessert called Milk and Honey is a crystal of that philosophy. It's a loose pile of white, like a snowball hidden in a snow pile, the secret stash of a winter prankster. You take your spoon to it and first find light crisps that disappear into a bare sweetness. Then you find a different sensation -- a feathery cold -- that also disappears, this time into a flavor of fresh milk. There's a spark of salt. And in the center is a scoop of smooth milk sorbet, one that breaks open to reveal a silky slick of honey. You laugh, thinking of this combination looking like an egg, that other most fundamental food.

The combination of milk and honey isn't even traditional so much as it's elemental. Milk is the first food; honey was probably the first sweet. The dish is so pure, it's almost primitive. Only pastry chef Angela Pinkerton has made it anything but primitive through technique, intelligence, wit and restraint. She started thinking about milk, she said, out of jealousy. "It was spring. In the kitchen, all the cooks were getting excited about their peas. But in pastry, we were still weeks away from getting the first fruit since the fall." While she watched those cooks' plates get lighter and lighter, inspired by their delicate new produce, she also started playing with the idea of simplicity and lightness. The flavors of this dish, she says, "are pure, cleansing and not too sweet. The dish is all presentation and texture. And then the surprise is that it's really just milk and honey."

But when she showed me how to make it, I was a little surprised to find an Igloo cooler at her station, frosted all around and steaming away with liquid nitrogen escaping from the cracks. For all the dish's magic, there was nothing about it that seemed very much like high-tech novelty -- no showy frozen oil, no vodka ice cubes. But as Pinkerton explained the process, I began to understand the unspectacular reasons for her choice to use it. She adds a little bit of liquor to the honey for the center because it helps keep it from getting too thick when it's in the freezer. But in order to set an equal quantity of honey in the middle of every scoop of sorbet, it helps to freeze it solid simply so you can handle it, and the nitrogen is cold enough to freeze the liquor as well as the honey.

Later, as she dropped the filled balls of sorbet into the nitrogen to quickly reset their smooth shape, executive chef Daniel Humm said to me, "I think liquid nitrogen is going to be standard in kitchens. We've only been playing with it for about a year, but what's really important is that it can help you make things with more precision." I watched Pinkerton set another lozenge of honey perfectly into the center of a scoop of sorbet, covering it back up. I imagined the nightmare of trying to do it by digging out a divot and trying to pour in the syrup evenly. "And it helps us be so much more efficient," Humm said. "You don't have to wait for hours and hours if you want an ice cream, for example. You can make it instantly."

That's when I was sold.

GETTING YOUR HANDS ON SOME

Admittedly, getting liquid nitrogen isn't the easiest thing in the world; you're not going to find it in aisle 11, next to the cupcake liners. But there's good news and bad news. Good: It's not very expensive, as low as $1 a gallon. Bad: The insulated dewar you'll need to keep it in can run in the hundreds of dollars, but some suppliers will rent them.

Look up a local welding supply store or an industrial gas supplier to buy it. (And don't tell your family, or Uncle Mort will have plenty of jokes for his post-dinner ha-ha's.)

Jeff Potter, author of the superb blog (and soon to be book!) Cooking for Geeks, notes that there are three main reasons you really want to be careful around liquid nitrogen.

1) It is colder than -346 degrees Farenheit. The oil in a deep fryer is about 346 degrees Fahrenheit. Think about that for a second. You really don't want to touch this stuff; it can burn you as seriously as fryer oil -- and so can any bowl or ladle you use while playing with it. So be careful, wear protective gloves, and don't be in a position where it can fall on you if the container the nitrogen is in breaks from the cold. (Unlikely, but still.)

Avoid glass bowls, since they can break from the shock. In fact, it's a good idea to use some kind of insulated container to keep the nitrogen in while you're using it -- I've seen chefs use Igloo coolers and even Styrofoam boxes. Since they don't conduct, you can touch the outside of the container without harm, unlike a metal bowl, which will be very, very cold.

Oh, and this also means that if you're freezing food with it, you'll want to let it warm back up to regular-old freezing temperature before eating it!

2) There is a small but real risk that if you play with it in a small, unventilated room, it can suffocate you. (As it evaporates, it pushes oxygen out of the room.) So make sure you're not in a small room that's unventilated.

3) You know all that steam it's giving off all the time? It's because it's boiling (even though it boils at temperatures so cold it can freeze your fingers off in a second). That means it's turning into gas that wants to escape, and that means that if you put it in a fully sealed container, the pressure will eventually build and blow the container up, and maybe you with it. No joke.

WHAT DO I DO WITH IT?

In addition to the recipe below, you may want to check out this thread on the eGullet forums, which gives ideas like shooting whipped cream into it and fishing it out right away, giving you whipped cream balls with crisp frozen shells. There's also some great discussion on additional safety precautions, too. (h/t to the fabulous Heidi Swanson of 101cookbooks.com)

AND HOW CAN I FAKE IT IF I CAN'T GET SOME?

Jeff Potter recommends a hack with dry ice, something far more accessible than liquid nitrogen. Since dry ice gets below -109 degrees Fahrenheit, it's still plenty cold and can do a lot of the things you'd want liquid nitrogen to do.

Wrap a chunk of dry ice up in a towel and crush it with a mallet, a back of a frying pan, whatever. When it's like a dust, stir in enough cheap vodka to make it into a slurry into which you can pack a bowl you want super-chilled. Or set it on top of your food to freeze it.

The problem with this is that it will leave some alcohol on your food it you let it touch it directly, so a lot of the "shoot it into the nitro vat!" tricks won't work. But if you're using it for the Milk and Honey, you can, for instance, lay aluminum foil on top of the filled molds and set the slurry on top, and pack the bottom of the molds into a tray of dry ice slurry.

A real note of warning with this, though: While it's not nearly as cold as liquid nitrogen, in a sense dry ice slurry can be even more dangerous. The nitrogen will evaporate constantly, even as it touches your skin, but this slurry will stick around for a while. It can get on your clothes and just keep freezer-burning away at your skin, so be extra careful with it. Special equipment: Silicone dome molds in 1-inch diameter and 2-inch diameter sizes; if using liquid nitrogen, have it in an insulated container big enough to drop the molds into

On a chilled or even frozen plate, crumble and lay down a small bed of crispy milk. Pop out and set the honey-filled milk sorbet on top of it. Spoon more crispy milk around one side of the sorbet. Spoon milk snow around the other side. Sprinkle on a pinch of salt and a pinch of bee pollen. Serve immediately.