Mitt Romney may have a woman problem 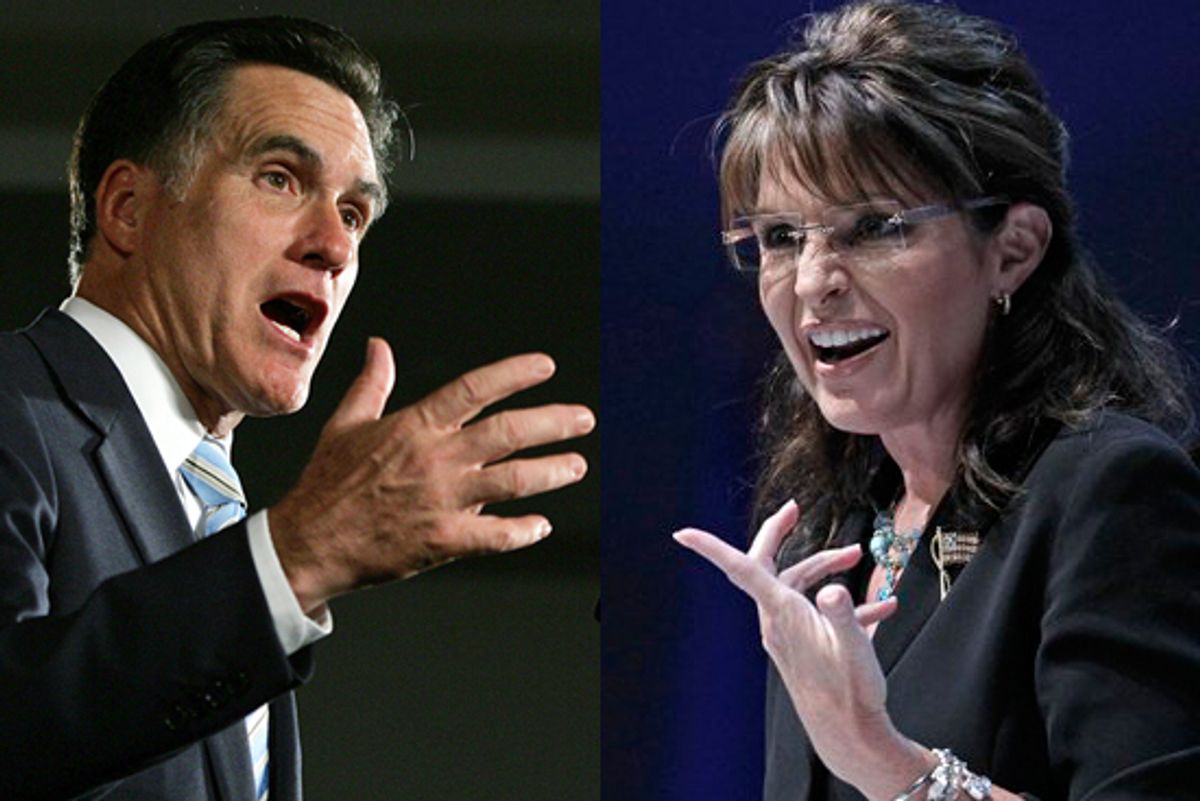 Oh boy, here we go again. Mitt Romney has his eyes on a major political office -- if only that damned woman would get out of the way!

Romney, of course, is running for president in 2012, and has been from the moment he used a comically red meat-laden CPAC speech to depart from the 2008 GOP race. And his prospects, at least for the Republican nomination, aren't bad: He's the next-in-line guy, he'll have plenty of cash, and there just aren't that many other options.

But then there's Sarah Palin. She may ultimately decide not to run, but this past week brought fresh evidence -- in the form of her suddenly ramped-up and professionalized national political organization -- that she's serious about it.

It was certainly enough to catch Team Romney's attention. On Thursday, a Romney advisor -- unnamed, of course -- told Time's Mark Halperin that Palin is "not a serious human being," while another Romney "intimate" opined that "if she’s standing up there in a debate and the answers are more than 15 seconds long, she’s in trouble." The Palin camp then fired back (anonymously) and Romney took to his Twitter feed in an effort to put the fire out.

With the Iowa caucuses now 18 months away, the episode offered a preview of coming attractions. If Palin does run, she will be one of Romney's biggest threats -- maybe his biggest. Romney, in other words, may end up being the first GOP presidential front-runner in history whose chief rival is a woman. Which is very bad news for Mitt, because it's a role in which he'd be horribly miscast.

Three times in his relatively limited political career Romney has found a woman standing between him and his political goal. In each case, he ended up getting what he wanted -- but it was always awkward, ugly and downright nasty, with cries of chauvinism and sexism along the way. The man just does not know how to look good while competing with a woman.

Romney first went toe-to-toe with a woman in the spring of 1994, when, as an executive at Bain Capital, he jumped into the race for the Republican nomination to oppose Ted Kennedy. The early front-runner for the nod was a woman: Janet Jeghelian, a former Boston talk-radio host who entered the contest with far more name recognition than Romney. But at the state convention, Romney -- aided by the state GOP establishment -- helped ensure that she wouldn't even receive a spot on the primary ballot.

Jeghelian's own shortcomings, of course, were the main reason for her collapse. But it still irked many women to watch her use her convention speech to literally beg for a chance to run -- and then to be denied. When it was over, she told the press that she doubted Romney's sincerity on women's issues (he was claiming to be pro-choice back then) and that she wouldn't support him in the primary.

"It's too bad a woman's not going to be on the ballot," she said. "I don't think Mitt Romney stands much of a chance to beat Ted Kennedy." (She was right: Romney lost by 17 points that November.)

But the Jeghelian incident had nothing on the events of March 2002. That's when Romney, his image boosted by the just-completed Winter Olympics (which he'd organized), returned from Utah to Massachusetts intent on running for governor. The only problem was that the job was already filled by a Republican -- a female Republican, Jane Swift, who had spent the last year swearing up and down that she planned to run in '02. Romney himself had publicly pledged fealty to Swift the previous year.

But Romney was done pretending to be her friend. Again aided by the state GOP establishment, he engineered a coup. One by one, prominent state Republicans stepped forward to call for Swift's exit -- and the anointment of Romney as her replacement on the fall ticket. He cut her legs out from under her, and within days Swift -- the state's first female governor and the first governor in the country to give birth while in office -- dropped out of the race, forced to pretend that "family obligations" would keep her from running.

Sure, Swift had her flaws. Her abbreviated stint as governor (she'd taken over from Paul Cellucci a year earlier) had been rocky and polls showed her an easy mark for the Democrats in the fall. But it was the way that Romney shoved her aside that looked bad -- and that infuriated women.

"It's hard to know which is more enraging, the presumption of a rich, white man that he can buy the governor's office or the misogyny of a political culture that makes it impossible for a woman even to try to earn it," wrote Eileen McNamara, the Boston Globe's Pulitzer Prize-winning columnist.

In that same column, McNamara offered a warning to Romney's eventual Democratic opponent, state Treasurer Shannon O'Brien: "Look out, Madam Treasurer, the boys have only one female target now."

How prophetic. In the fall campaign's pivotal final debate, O'Brien sought to hold Romney accountable for his ever-shifting positions on abortion. He was still pretending to support abortion rights, but it was now more complicated because, during his Utah sojourn (when he'd flirted with running for office there), Romney had told a newspaper not to call him pro-choice. Now, O'Brien tried to elicit a straight answer from him. He ducked and dodged for a few minutes and then bore in, pointing his finger and telling his female opponent that "your effort to continue to try to create fear and deception here is unbecoming."

The exchange was played over and over on television and radio, and reactions broke on gender lines. "Unbecoming?" the Globe's Joan Vennochi wrote. "Any female who has ever been accused of unbecoming conduct knows that is 'Leave it to Beaver' code for saying she is not 'ladylike.'" This outrage, though, was lost on many men.

It didn't cost Romney on Election Day, probably because just as many men rallied to Romney after the exchange as women rallied to O'Brien. The gender gap ended up being enormous. The uproar, in fact, may have actually helped Romney in some of the working-class, culturally conservative cities that he ended up carrying. And there were plenty of other reasons for his victory that had nothing to do with gender.

Yes, it's true that Romney is three-for-three running against women. But it's also true that he played with fire each time. He was able to get away with it in Massachusetts, for a variety of reasons, but the lights shine brighter -- much brighter -- on the national political stage. When a woman is in the race, Romney has a knack for making himself look bad -- something all of America may soon discover.