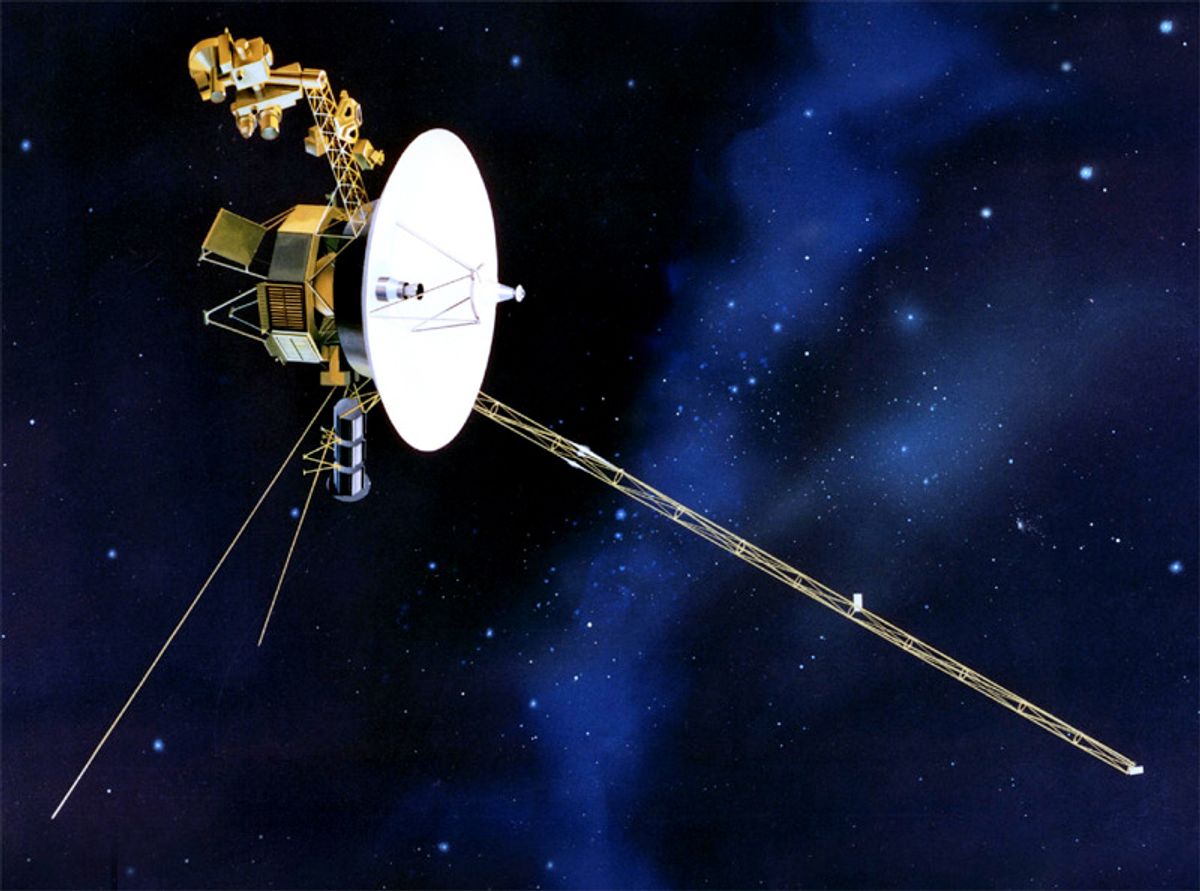 On Tuesday, the world will mark the 41st anniversary of the first lunar landing, when American astronauts Neil Armstrong and Buzz Aldrin hopped, skipped and jumped their way across the surface of the moon. The 1969 touchdown was a historic accomplishment, but as science writer and academic Stephen Pyne points out in his new book, "Voyager: Seeking Newer Worlds in the Third Great Age of Discovery," it wasn't a terribly practical one. We've garnered more useful information over the last few decades, he argues, from our less glamorous unmanned space program than we have from manned flights. Case in point: Voyagers 1 and 2. Over the past 30 years, the probes have made fly-bys of Jupiter, Saturn, Uranus and Neptune; flooded us with groundbreaking scientific data about deep space; and snapped some of the most iconic and enduring images ever taken of our solar system.

Pyne's book isn't just an overview of the Voyager program; it's a sweeping history of what Pyne calls the "third age of discovery," beginning with the first sputterings of Sputnik and reaching all the way to our recent space shuttle disasters. Along the way, we’re treated to a dense but intriguing sweep of the eras of exploration past, from the Europeans poking their heads (and swords) into the Americas to the frost-bitten teams trudging toward the two poles. Strapping ourselves to rockets bound for outer space, Pyne reminds us, wasn’t the first crazy idea that curious humans ever had.

Salon spoke with Pyne about the importance of the Voyager mission, the overlap between science fiction and reality, and our misguided desire to shoot humans into space.

I always identify the space age with Neil Armstrong walking around on the moon. Do you think that in 50 or 100 years we’ll look back and realize those moments weren’t as monumentally important as they feel now?

I think we’ll see Apollo as a fascinating program, a great moment in American history, but I think we’ll also see that it didn’t necessarily lead anywhere else. It may have been a dead end. To give an analogy, it’s not like Columbus landing in the Bahamas. It’s more like the Norse landing in Greenland or Polynesians getting to Easter Island. It didn’t take us any further. The momentum, the future, has all gone to things like Voyager, the unmanned explorers.

Probes like Voyager also send back images that anyone can see. It democratizes the process of exploration.

Yes. It's very much a collective enterprise. Hundreds of thousands of people have put these things together, and then many, many people can experience them at the same time, and that really changes the dynamic of how you tell the story [of exploration] and how it’s recorded culturally. Voyager was launched in 1977, so it was a long time before Facebook and social networking, but in a sense that may be part of the story: That’s where exploration is going, too. It’s not single author, single experience anymore. There may be more of a network.

We've had to grapple with the idea of robots doing our exploration for us, instead of just being able to go everywhere ourselves. To some people that's disappointing.

It's hard for us to grasp, so we anthropomorphize the robots. It makes sense. They are our creations, as much as a painting or a building or a set of laws. They express our values, our ideas, our aspirations. They are proxies, and I think people respond to them in that way. But for those people who are disappointed not to see people in space doing the exploring, I’d say, you really don’t need to be there as a human — what experiences can a human even have in space? Can you smell? Can you taste? Can you touch? I mean, you’re encased in this artificial environment that really cuts off all of your senses to the outside. You can see, but we could probably see as well or better with instruments. So why not send a robot in your place?

In the last 500 years, you say there have been these three big ages of discovery — first Magellan and Columbus and that whole crew in the 1500s, then the treks to the interiors of the continents in the 18th and 19th centuries, and now our current age. What causes people during a certain time period to become intensely focused on exploration?

Each new phase of exploration is characterized by several things coming together. One is the technology that allows you to get to new places — you can’t explore unless you have the physical and scientific means. Another is the motivation, the cultural interest in going. That’s why large-scale shifts in the world tend to translate into eras of exploration — the Enlightenment, the Renaissance, modernism. And then lastly, an era of exploration requires some kind of rivalry, a geopolitical contest. Curiosity by itself just isn’t enough. Technology by itself isn’t enough. There has to be some kind of competition to propel it.

The current era of exploration seems fundamentally different in the sense that there aren’t any people to encounter in the places we’re going, and it’s a lot harder to do the things we used to, like set up colonies.

Yes, fundamental, because one of the ways we understand exploration is in terms of the encounters that come from it. On the positive side, in space you strip away a lot of the horror and the cruelty that accompanied exploration and conquest in the past. It’s just not going to happen this time around because, simply put, there’s nobody out there. On the other hand, that contact has always been part of the moral drama of exploration, what really gives it its bite, so if there are not people out there to find, it raises the question, Will we care in the same way? Hasn’t that always been the payoff, to find new people and to engage?

For some people this new era just doesn’t look right, particularly in those countries like the United States that were settled — because for the narrative of exploration we need colonization, or at least some kind of cross-cultural exchange. In my mind, that’s not really necessary for exploration, but it may be the reason that NASA has committed very heavily since the beginning to the "humans in space" story, and sold space to us with human interest and drama. But the truth is, there’s very little science coming out of things like the shuttle or the space stations, and they bleed the agency dry. I think it was the wrong choice.

How important has science fiction been in shaping the way we think of space exploration?

Science fiction actually preceded it, and many people involved in the program had grown up reading these books and took the ideas within them very seriously. I think that what made the literary side so potent was that it gave space exploration a sense of story. It helped us answer those big-picture questions: What does this all mean? How can we understand what is unfolding?

But these stories are also part of the reason that we seek a human narrative in space, because science fiction, like all good literature, is based on conflict and character. "Star Trek" can populate this imaginary world with all these other beings, and that’s the drama. They’re not just out there encountering the magnetosphere or some unknown planet; they’re dealing with living, sentient forms. If you don’t have that, how does it work? I’m not sure that the fiction could cope with that, but the reality must.

And the Voyagers themselves are also literally carrying a story — a recording that's supposed to showcase humanity to any alien life the probes might find out there.

They are each equipped with a gold-plated phonograph record and instructions (if anyone is able to decode them) on how to play it. They’re filled with sounds and greetings in most of the earth’s languages. It sounds crazy, but I think the people who put these messages together were fairly clear that it was a one-in-a-billion chance that any other being would hear them, but they knew that everyone on earth would. The Voyagers aren’t going to come home — they’re just going to continue out indefinitely, so it’s not the classic exploration or questing narrative, where you leave and then come back with what you’ve learned. The Voyagers will never do that. And so maybe for our own sanity as explorers they had to carry that narrative with them.

So what is the next era of exploration?

Who knows. I think we have a long time to run with this era and imagining beyond is too much for me. I’m happy to just ride Voyager out, ride it to the edge and see what comes back. We still have lots of planets. We haven’t been to Pluto yet, though there’s a spacecraft on its way now. I think we’ll be doing this space business for a while.