Is this the latest anti-government police shooting? 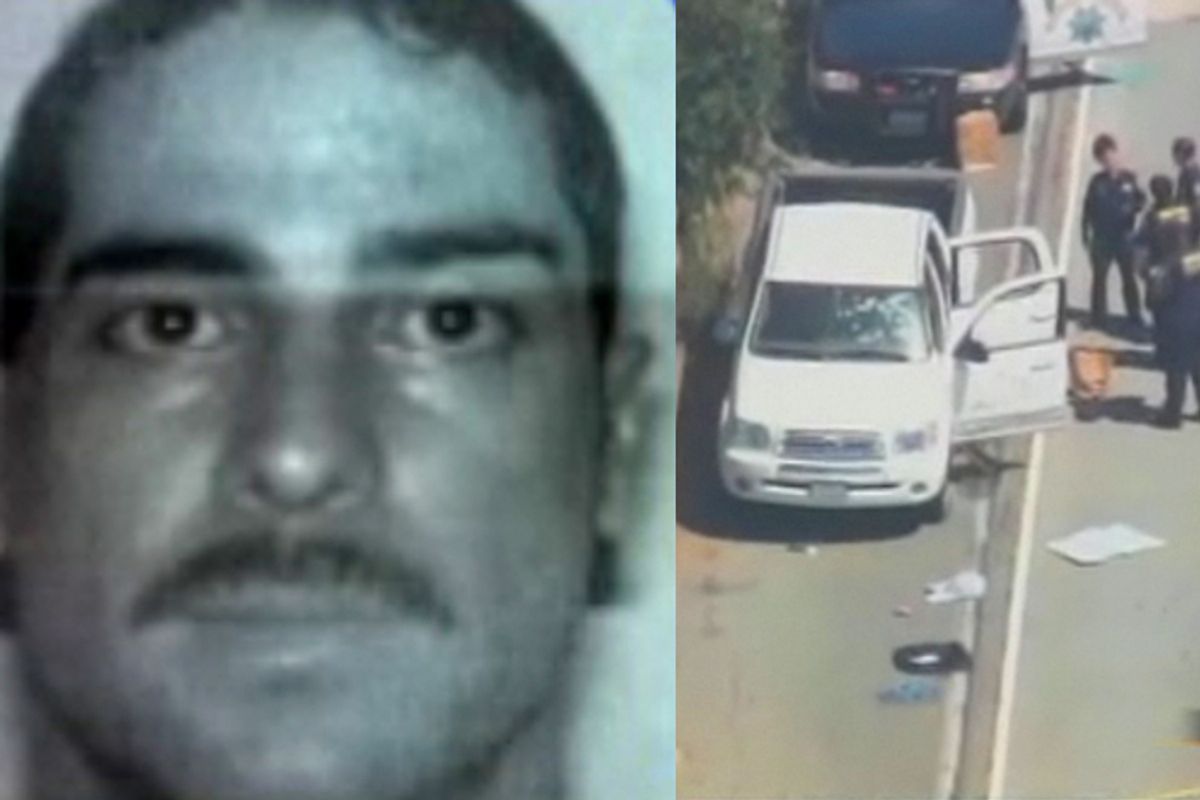 Byron Williams and a scene from the Oakland shootout.
--

On Sunday, a heavily-armed Groveland, California, man named Byron Williams allegedly opened fire at police after they pulled over his truck in Oakland. After a dramatic shootout, two officers sustained injuries from flying  shards of glass and Williams -- who had a shotgun, a handgun, a rifle, and was wearing a bulletproof vest -- was in the hospital in serious condition.

Williams' mother Janice told a local ABC affiliate her son often became angry watching TV news and "[h]e feels the people of this country are being raped by our government and politicians." She told the San Francisco Chronicle that Byron Williams was also upset at "the way Congress was railroading through all these left-wing agenda items." Meanwhile, the San Jose Mercury News quotes unnamed law enforcement sources saying that Williams, 45, "has a history showing he is anti-government, anti-corporation and against liberal causes.

If Williams was indeed motivated by anger at the government -- and it's important to note that police still haven't commented on motive -- then this is, by our count, the third recent case of people angry at the government or the Obama Administration opening fire on police.

The other two cases share some strands with the Williams case (bullet-proof vests, lots of guns, traffic stops), but they resulted in the deaths of several police officers.

In April 2009, 22-year-old Richard Poplawski allegedly opened fire on police who responded to a 911 call from Poplawski's mother. Poplawski, who was wearing a bullet-proof vest and was armed with an assault rifle and two other guns, survived the ensuing four-hour gun battle -- but three police officers were killed. His friends said he feared "the Obama gun ban that's on the way" and "didn't like our rights being infringed upon."

This past May, Jerry Kane and his teenage son Joe opened fire on police, killing two officers, when  after they were pulled over on the highway in West Memphis, Arkansas. Kane and his son, who were killed by police later that day, traveled the country giving debt-elimination seminars based on an anti-government theory that all bank loans and modern finance are fundamentally illegitimate. Kane had also complained about being stopped at a "Nazi checkpoint" in New Mexico and fantasized about beating up IRS agents.

We'll probably find out more about the Williams case in Oakland in the coming weeks. One apparent focus of the investigation is a three-ring binder labeled "California" that authorities found in his truck.

California Highway Patrol spokesman Trent Cross told Salon that the FBI, which is assisting in the investigation, showed interest in the binder. "They just put it in a bag, sealed it, and took off. They took it and are being real quiet about it," Cross said.

An FBI spokeswoman declined to comment, referring Salon to the Oakland Police Department, which did not return a call.