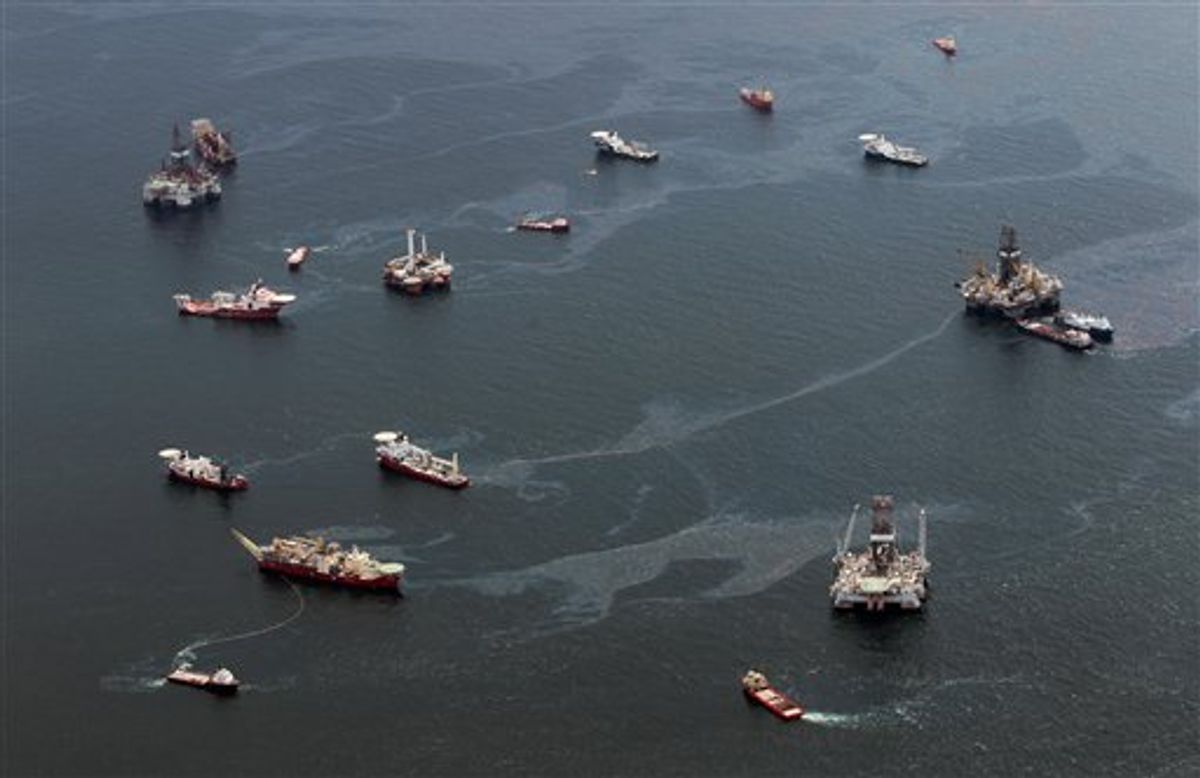 Drilling rigs and workboats operate at the site of the Deepwater Horizon incident in the Gulf of Mexico Friday, July 16, 2010. The wellhead has been capped and BP is continuing to test the integrity of the well before resuming production. (AP Photo/Dave Martin) (AP)
--

Let's hear it for the University of South Alabama. BP, reports Ben Raines for Mobile's Press-Register, "attempted to hire the entire marine sciences department" at South Alabama, but "the university declined because of confidentiality restrictions that the company sought on any research."

The Press-Register obtained a copy of a contract offered to scientists by BP. It prohibits the scientists from publishing their research, sharing it with other scientists, or speaking about the data that they collect for at least the next three years.

According to Raines, "the contract makes it clear that BP is seeking to add scientists to the legal team that will fight the Natural Resources Damage Assessment lawsuit that the federal government will bring as a result of the Gulf oil spill."

BP naturally has the right to defend itself against a government lawsuit, but the confidentiality requirements locking up research into the impact of the Gulf oil leak are directly opposed to the public interest. The scale on which BP is operating suggests an organized campaign to bury a significant proportion of Gulf scientific research.

Scientists from Louisiana State University, University of Southern Mississippi and Texas A&M have reportedly accepted, according to academic officials. Scientists who study marine invertebrates, plankton, marsh environments, oceanography, sharks and other topics have been solicited.

Could there be a more obvious role for government funding, with no strings attached? But as Think Progress' Brad Johnson observes, pointing to a Dan Froomkin Huffington Post story, the feds have not been living up to their own responsibilities.

The National Oceanic and Atmospheric Administration is hoarding vast amounts of raw data that independent marine researchers say could help both the public and scientists better understand the extent of the damage being caused by the massive BP oil spill in the Gulf of Mexico.

In most cases, NOAA insists on putting the data through a ponderous, many-weeks-long vetting process...

BP, incidentally, gets to see all this data right away.