Get over it, Republicans: Al Franken won 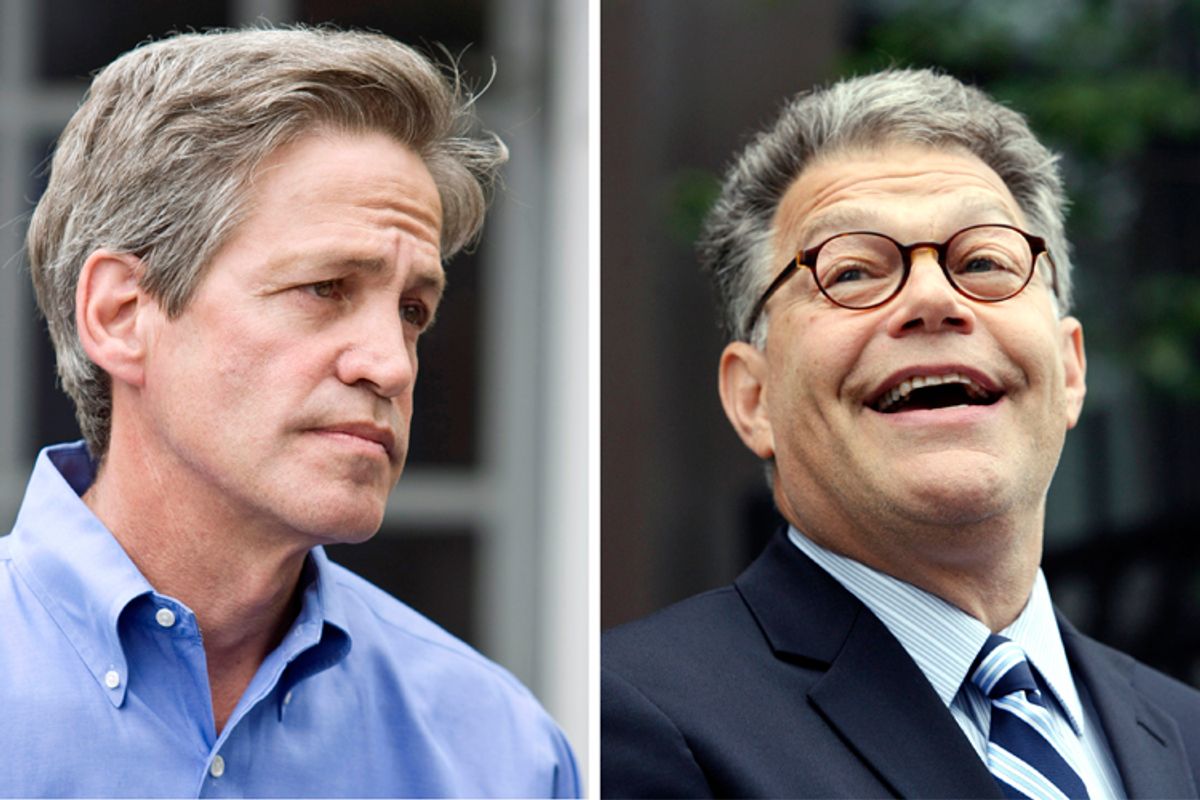 This originally appeared at MinnPost.

I have watched from afar — and with lots of bemusement — the recent dust-up over the alleged number of supposed felons who may have registered and perhaps voted on Nov. 4, 2008, in Minnesota’s U.S. Senate race.

After all, my life has been immersed in the Al Franken-Norm Coleman recount for nearly two years — first, covering all of the twists and turns of the recount for MinnPost, and then writing my book, "This Is Not Florida: How Al Franken Won the Minnesota Senate Recount." It’s now completed and will be released in a few months. Had I the chance, I would have made this current controversy a tiny footnote in my conclusions.

One point I make in the book is that various panels of judges and even former Sen. Coleman’s lawyer in court said there was no widespread fraud in the election.

Still, Minnesota Majority, a very conservative “watchdog” group, released a report (PDF) on June 28 that claims a lot of things. But when you get to the bottom line, the group seems to be saying that according to its research, 341 felons in Hennepin and Ramsey counties who should have been ineligible to vote actually cast votes in the Franken-Coleman election.

The report, flawed in the opinion of most legal analysts, got legs and wings and Internet echo chamber reverberations from — who else? — Fox News last week, and then other news organizations chased it, and right-wing blogs jumped on it, and the Minnesota Republican Party called for a statewide investigation and Coleman called Franken “an accidental senator” and Gov. Tim Pawlenty said there was “credible evidence” that the alleged felons who maybe voted possibly could have flipped the election’s final result. Breathless.

Let’s drill down a little bit. First, let’s look at the reporting. Fox News, which has its agenda, of course, topped its online story with this screaming headline: “Felons Voting Illegally May Have Put Franken Over the Top in Minnesota, Study Finds.” Fox News also quoted Ramsey County prosecutor Phil Carruthers as saying that as his office looks into the matter, “There is a good chance we may match or even exceed their numbers."

But days later, Star Tribune reporter Kevin Diaz — a former colleague whom I tend to trust more than Faux News — quoted Carruthers as saying of the Minnesota Majority investigation: "Overwhelmingly, their statistics were not accurate." Hmmm. Something changed.

Now, let’s take one key stat that Minnesota Majority focuses on, that 341 alleged felons from heavily Democratic Hennepin and Ramsey counties voted. For the moment, take that at face value.

That would mean, based on voter turnout numbers, about 70 percent of them (240) would be from Hennepin and 30 percent (101) would be from Ramsey. Taking into account the percentages for Franken, Coleman and others in each of those counties, Franken would net 51 votes.

Remember, he won by 312. Let’s take away those 51 in this silly game. That still isn’t enough to switch the result.

The report has been the stuff of high-level discussion at the Election Law Blog, run by respected professor Rick Hasen at Loyola Law School in Los Angeles. There, professor Michael P. McDonald of George Mason University shoots down the Minnesota Majority report when answering Hasen’s opening question: "Did enough illegal felons vote in Minnesota to tip the balance to Al Franken?"

A few other things: What makes anyone think felons would vote only for Franken? Indeed, it was Franken’s legal team during the recount’s election contest trial that raised the prospect that felons voted in the election; Franken’s lawyers found one such voter in a northern Minnesota county who voted for Coleman. Dare I ask: If Franken opened the door on such an avenue, why didn’t Coleman’s lawyers pursue this felon-voting issue then? They had their chance. And why does the Minnesota Majority report focus on the core-city counties?

In my book, you will see a handful of flubs made by both sides in the recount legal battle.

Several things gnaw at me in this story:

1. First is the implication that if voter ID cards were used on Election Day, felons wouldn’t be able to vote. This is a long-standing Republican issue to limit voting among the disenfranchised. Republican gubernatorial candidate Tom Emmer has used this controversy to call for picture IDs for voters. But guess what? Convicted felons have driver’s licenses. They have photo IDs. Voter photo IDs wouldn’t halt felons from voting. This Minnesota Majority report is being used for other political reasons.

2. I don’t mean to be disrespectful, just instructive, but I’d like to comment on the comments of Sen. Coleman and Gov. Pawlenty. As we know, Coleman won the 2002 Senate election 11 days after incumbent Sen. Paul Wellstone was killed in a plane crash. Polls showed Wellstone was going to win that election. For Coleman to call Franken “an accidental senator” is tragically ironic, for there are some who believe Coleman was the original accidental senator.

As for the governor, he has spoken three times about the recount, and he’s been a bit fast and loose with his facts. First, in the early days of the recount, he spread — on Fox News — the completely untrue story about Minneapolis ballots that were supposedly being driven around in the alleged trunk of an unknown and nonexistent elections official. He spoke of this days after it was reported that the story was a fable.

Later, in a call with reporters, he overstated by thousands of percentage points the increase of absentee voters in 2008, trying to say that Franken won the election because of that.

In fact, Franken won the recount by 49 votes before absentee ballots were counted.

Now, there are his comments — on Fox News — about the Minnesota Majority report and how it’s “quite possible” felon voting tipped the election. The facts aren’t there.

3. The central fact that real felons whose voting rights were legally taken away and not restored might have voted in 2008 — that is serious. That matter should be examined closely by state and county officials. There’s no argument there.

4. If there is any doubt that the 2014 Franken reelection campaign against anyone — Pawlenty? — is going to be nasty and heated and ugly, this latest scuffle confirms it. Franken will forever be a target for the Republicans, and if it is close again, be certain that Republican recount strategies and legal tactics will be different from those of 2008-09.

You can read how they did this time round in "This Is Not Florida." But be assured the Coleman-Franken recount and legal fight — a huge defeat for the Republicans — will be a rallying cry for the GOP in any future recount tussle.

Jay Weiner writes about politics and sports business issues. His book, "This Is Not Florida: How Al Franken Won the Minnesota Senate Recount," will be published this fall. He can be reached at jweiner [at] minnpost [dot] com.