Why is John McCain doing this to himself?

He's doing his best to beat J.D. Hayworth in next month's GOP primary, and he probably will. But so what? 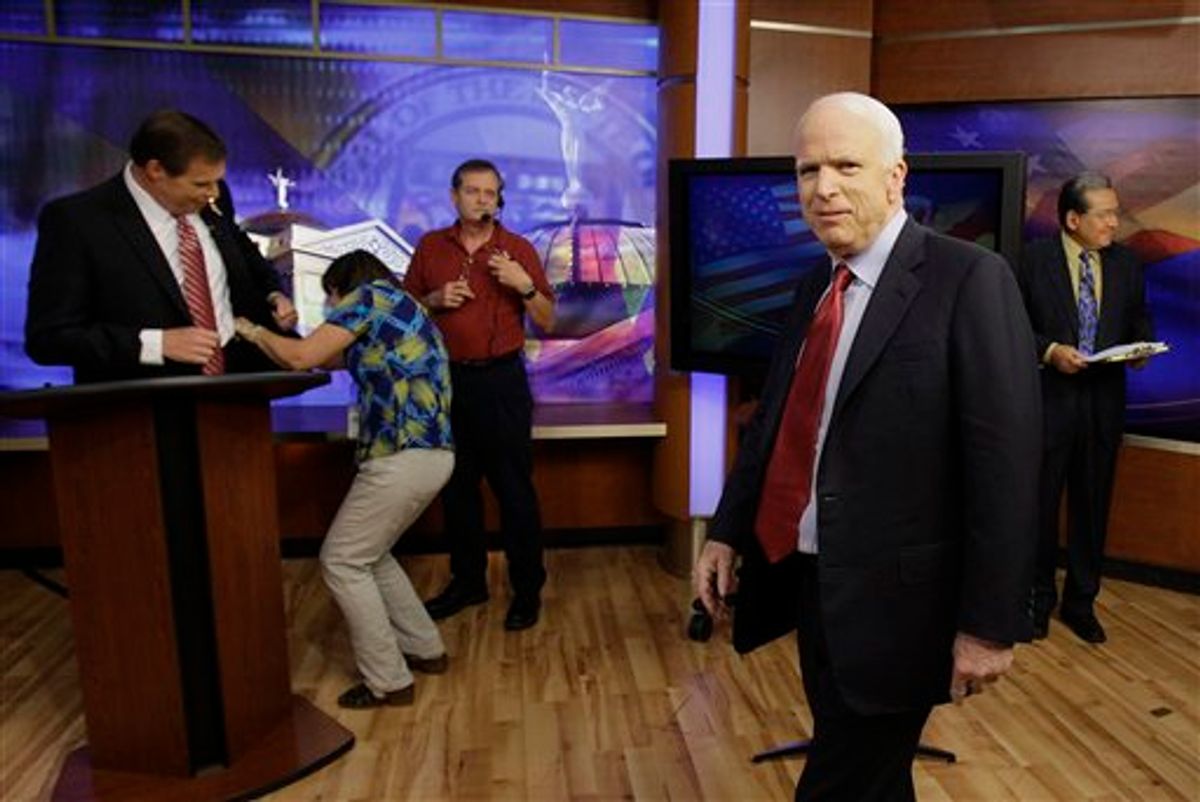 John McCain is probably going to win next month’s Republican Senate primary in Arizona – if only because his main challenger, former Rep. J.D. Hayworth, is an opposition researcher’s dream.

When the two men debated on Friday night (along with a third candidate who hasn’t yet made a blip in the polls), McCain was able to deflect his foe’s glib attacks by mocking Hayworth for his decision to cash-in as a lobbyist after losing his House seat in 2006, his embarrassing stint as a “free money” pitchman, and his apparent belief that the United States never declared war on Hitler’s Germany. Even in today’s irrational, Tea Party-fied GOP, it’s hard to imagine McCain losing to Hayworth on August 24.

But watching Friday’s debate, a more basic question came to mind: Why is McCain putting himself through this?

Sure, he’s always regarded political opponents as personal enemies, so he’ll undoubtedly take delight in beating Hayworth, badly. But to neutralize Hayworth’s challenge, McCain has had to reinvent himself -- yet again -- as a Tea Party true believer. The maverick image he relentlessly touted in 2008 may have been an illusion, but it was an illusion McCain cherished. But in order to survive in ’10, he’s sacrificed it, pretending he’s always been a knee-jerk ideologue. Besides his prods of Hayworth, there was no room on Friday night for McCain to express himself. Instead, he made sure to mouth Tea Party rhetoric, straining to make himself acceptable enough to a GOP base that has never liked him but that doesn’t think much of Hayworth, either.

There’s something vaguely sad about this. Early last decade, McCain was the most popular politician in the country. Just two years ago, he was the Republican nominee for president, winning close to 47 percent of the vote. And now he’s been reduced to hoping that the Tea Party crowd will choose him over an ethically challenged former sports anchor with an alarming ignorance of history. Other defeated presidential candidates have gone on to face tough elections in their home states, but most of them got to keep their dignity. When, for instance, George McGovern fended off Leo Thorsness in 1974, he offered himself as the same man (with the same principles) who had lost to Richard Nixon two years earlier.

This might make sense for McCain if there was an obvious reward for victory. But even if he survives the primary (and the November general election), all he’ll get is six more years in the Senate. And as the last two years have shown, there’s really not much for him to do there anymore.

Whether the Senate that McCain returns to in January is controlled by Democrats or Republicans won’t really matter. The GOP congressional strategy won’t be much different for the next two years than it has been for the last two: confrontation with the Obama White House. McCain will either have to go along with the conservative ideologues who dominate the GOP or offer himself as a bipartisan collaborator with the administration.

And there’s really no question which route he’ll take. As I’ve written before, the constant in McCain’s political career is his inability to let go of defeat and his compulsion to use his power to exact revenge. His posture in the early days of the Bush administration (pre-9/11) is a perfect illustration of this. McCain, long a reliably conservative vote in the Senate (except on campaign finance reform), suddenly found himself picking fights with the new Republican White House over tax cuts, a patients’ bill of rights, and gun control. This was uncharted territory for McCain, a jarring break with the philosophy he’d articulated for the first two decades of his political career. It was hard not to conclude that McCain primarily saw these issues as tools to aid his quest for payback against the man who’d beaten him in the 2000 GOP primaries.

He’s treated Obama the same way. Compromise with the new president has been out of the question from the very beginning (even before the Hayworth challenge emerged). Just as McCain cooperated with Democrats to poke a stick in Bush’s eye, it seems likely he joined the GOP’s rejectionist chorus in January 2009 at least in part to get under Obama’s skin.

If McCain is reelected this year, his Senate term will expire in January 2017. That means that, if he’s reelected in 2012, Obama will be president for all of McCain’s next term. Which won’t be very fun for McCain. The GOP has been overrun by ideologues who don’t trust him and never will, so he won’t be able to lead his own party. Nor will he have any interest in teaming up with the White House. So what’s the point?