"True Blood" recap: Love is in the air

Franklin explains his intentions, Lafayette gets a visit from Jesus -- and the sexual tension heats up 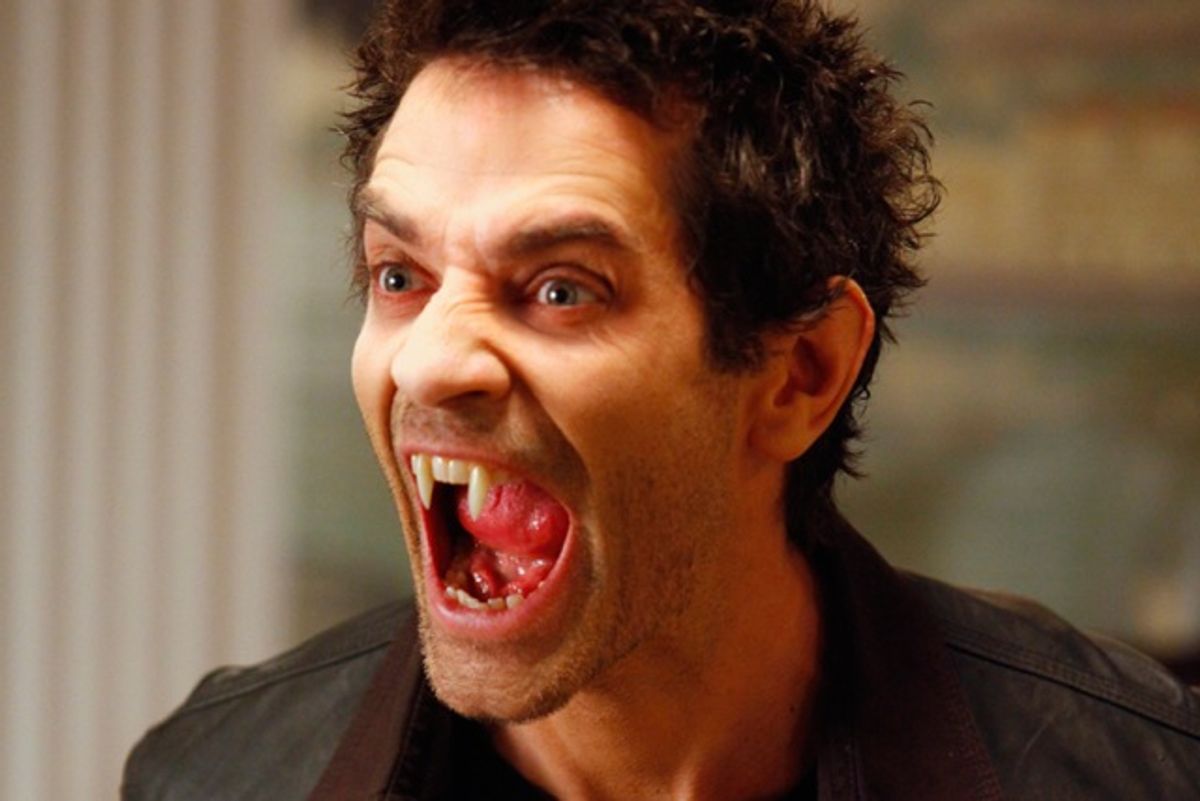 Trouble. It's the name of this episode and of the classic board game invented in 1965. Sometimes it feels like "True Blood" might just as well be a venture between HBO and Hasbro. It's like they've taken the best of all their most popular shows -- the loopy carnality of "Sex and The City," the unflinching violence of "The Sopranos," the underworld politics of "The Wire," the morbid bent of "Six Feet Under"and the perversity of "Deadwood" -- put it all into the Pop-O-Matic and let it roll.

Action figures, no doubt, are just around the corner. I'll buy myself an Eric first, but I'm developing a real fondness for Franklin (though I realize I'm not the one who would have to live with him for eternity). "You're a huge freak," says Russell who is echoing so many of my own gleeful thoughts this week.

The episode opens in Russell's palace/plantation/basilica, or whatever that is, where Talbot is talking to Tara as though Franklin just brought her home from the ASPCA. "Who's the pretty girl? You're a pretty girl! Yes you are!" Although Talbot doesn't think that Franklin's "dusky little blood beast" quite fits the décor.

Tara is, of course, surprised to see Bill return with Russell and Lorena, still sporting their messy meal mouths from late night take out in the limo. "Why is she here?" Bill wants to know. "She wants to be with me," says Franklin. "Hence the restraints," quips Talbot.

Franklin and Russell retire to the study to look at the dossier Bill has been keeping on Sookie. Franklin wants cash for his detective work, but the money will have to go to his trust account. Something to do with the church ladies Franklin slaughtered in Biloxi because they wouldn't let him have his turn at slots. Franklin explains his devotion to Tara: "She's such a fucking disaster. We could be twins."

Upstairs Lorena explains to Bill how it's just a matter of time before he's hers. "Russell was right," says Bill, "you're not very smart." Bill, I hate to be the one to bring this up, but is it possible that you're not actually all that attracted to smart girls? I say this because Sookie is sitting in Alcide's car right now insisting that the next step in her investigation should be to talk to Russell.

One of the many things I like about Alcide is that he is one of the few characters who has at least a glimmer of an idea of how annoying Sookie is. But her telepathy does come in handy, especially in exposing the frightened werewolf packmaster. "Obey!" he instructs Alcide, not very convincingly, before driving off, hopefully, for a consultation with Cesar Millan.

Back in Bon Temps, Jason shows up for work. While the cops who are actually cops are out on assignment, Jason is left to watch the office. Montage of Jason keeping himself busy. This is pretty much the Jason version of OMG cats. (Doesn't he look cute with fingerprint ink all over his face!)  Finally Andy puts him to work washing the police car. Look! There's the meth maker's daughter whose name is -- what else? -- Crystal.

Love is all around Bon Temps. Lafayette gets a visit from Jesus (Not the savior. The hot male nurse who's been taking care of his mother.) I saw this coming when they first met. But I don't think I'm going to make as much money as I hoped with the Lafayette "Jesus Is My Bitch" T-shirt idea. Lafayette talks tough, but when someone actually likes him, he turns into a blushing sixth grader who could take lessons in self-assurance from Hoyt.

Still it's kind of sweet. As is the mini-monologue Terry gives about transcending his PTSD to live with Arlene. "It's what normal people do, Sam. They fall in love. They make each other laugh. They move in together. They raise kids. They fight over money. They get old and fat together. And its normal. And it's happening to me!"

Oh, if only he could send just a little of that normal over to Tara! I'm not saying she doesn't look pretty in her vampire bride dress, or that being chased down by a naked Cooter is always such a bad thing (especially in those moments when he looks a little bit like Daniel Craig.) But a lifetime of watching Franklin obsessively showing off how fast he can text the word "motherfucker" could get tired pretty fast. Not to mention his literally bloody crying. There's not much you can do, however, when your undead boyfriend responds to "we need to talk" with a warning that whenever he hears that "everything goes blank and I wake up surrounded by body parts."

I wonder if anyone has ever broken up with Eric. Hard to imagine. Talbot and Russell love his old world ways, and how he shows up in such an unthreatening shade of baby blue to ask permission to hunt for Bill. Eric is such a lesson in how to be. Look how he doesn't even flinch when Russell reveals how Bill is now his minion. Although Eric does betray himself when he learns that Sookie is no longer Bill's.

Talbot offers him the grand tour, and on the way we discover that there's a bit of history between Lorena and Eric. But Talbot whisks him off before we can find out anything else and whatever it is, it's not as important as the history that exists between Eric and Russell. There among the collectibles is Eric's Viking King crown, taken from Eric's father after werewolves under Russell's command killed Eric's parents and his infant sister!

If Eric hadn't been so busy lusting after the waitress maybe things would have been different! Oh wait, apparently that's not the take away … it's vengeance on all werewolves! Which explains the motivation for Eric and Godric's excellent German adventure.

Meanwhile Bill is getting a visit from Cooter who just wants to let him know that Sookie is fucking a werewolf. This is information that Cooter, it seems to me, would have known before. Yeah, well, sometimes plotting things in the pop-o-matic doesn't always yield the clearest sense of direction. But this does serve as an effective lead in to the final scene where Bill, followed by everyone, ends up at Alcide's house. Cooter attacks Sookie but she wards him off with that mysterious blue energy of hers. "Fantastic!" chortles Russell.

Lines of the week:

Try this out should a friend or colleague discover your carefully guarded secret and call you out on it. Say, as Bill did to Russell, this is a "theory beautifully built of air and imagination." No one will believe you, but you'll get points for style.

Also, if someone starts nagging you to do something, instead of brushing them off with "soon," use the ancient Viking word "snot."