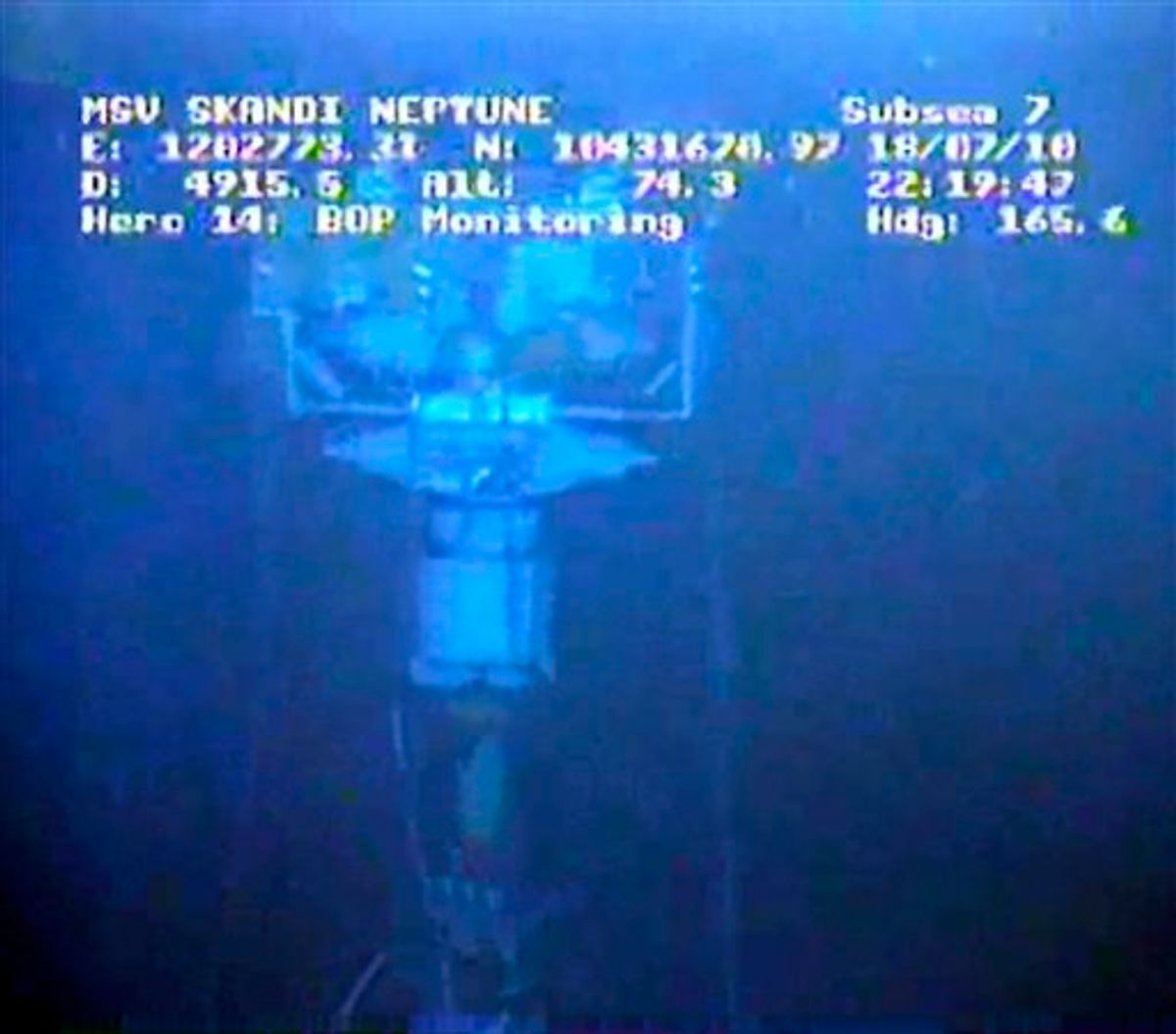 In this image taken from video provided by BP PLC at 22:19 CDT, the containment stack is shown at the site of the Deepwater Horizon oil spill in the Gulf of Mexico Sunday, July 18, 2010. BP and the Obama administration offered significantly differing views Sunday on whether the capped Gulf of Mexico oil well will have to be reopened, a contradiction that may be an effort by the oil giant to avoid blame if crude starts spewing again. (AP Photo/BP PLC) NO SALES (AP)
--

The federal government Monday allowed BP to keep the cap shut tight on its busted Gulf of Mexico oil well for another day despite a seep in the sea floor after the company promised to watch closely for signs of new leaks underground, settling for the moment a rift between BP and the government.

The Obama administration's point man for the spill, retired Coast Guard Adm. Thad Allen, said early Monday that government scientists had gotten the answers they wanted about how BP is monitoring the seabed around the mile-deep well, which has stopped gushing oil into the water since the experimental cap was closed Thursday.

Late Sunday, Allen said a seep had been detected a distance from the busted oil well and demanded in a sharply worded letter that BP step up monitoring of the ocean floor. Allen didn't say what was coming from the seep. White House energy adviser Carol Browner told the CBS "Early Show" the seep was found less than two miles from the well site.

The concern all along -- since pressure readings on the cap weren't as high as expected -- was a leak elsewhere in the well bore, meaning the cap may have to be reopened to prevent the environmental disaster from becoming even worse and harder to fix. An underground leak could let oil and gas escape uncontrolled through bedrock and mud.

"When seeps are detected, you are directed to marshal resources, quickly investigate, and report findings to the government in no more than four hours. I direct you to provide me a written procedure for opening the choke valve as quickly as possible without damaging the well should hydrocarbon seepage near the well head be confirmed," Allen said in a letter to BP Managing Director Bob Dudley.

When asked about the seep and the monitoring, BP spokesman Mark Salt would only say that "we continue to work very closely with all government scientists on this."

Early Monday, Allen issued a statement saying there had been an overnight conference call between the federal science team and BP.

"During the conversation, the federal science team got the answers they were seeking and the commitment from BP to meet their monitoring and notification obligations," Allen said.

He said BP could continue testing the cap, meaning keeping it shut, only if the company continues to meet their obligations to rigorously monitor for any signs that this test could worsen the overall situation.

Both Allen and BP have said they don't know how long the trial run will continue. It was set to end Sunday afternoon, but the deadline came and went with no official word on what's next.

Browner said Allen's extension went until Monday afternoon. She said on ABC's "Good Morning America" that monitoring was crucial to make sure the trapped oil doesn't break out of its pipe.

"Clearly we want this to end. But we don't want to enter into a situation where we have uncontrolled leaks all over the Gulf floor," Browner told ABC.

BP PLC said Monday that the cost of dealing with the oil spill has now reached nearly $4 billion. The company said it has made payments totaling $207 million to settle individual claims for damages from the spill along the southern coast of the United States. To date, almost 116,000 claims have been submitted and more than 67,500 payments have been made, totaling $207 million.

With the newly installed cap keeping oil from BP's busted well out of the Gulf during a trial run, this weekend offered a chance for the oil company and government to gloat over their shared success -- the first real victory in fighting the spill. Instead, the two sides have spent the past two days disagreeing over what to with the undersea machinery holding back the gusher.

The apparent disagreement began to sprout Saturday when Allen said the cap would eventually be hooked up to a mile-long pipe to pump the crude to ships on the surface. But early the next day, BP chief operating officer Doug Suttles said the cap should stay clamped shut to keep in the oil until relief wells are finished.

After nearly three months of harsh criticism as it tried repeatedly to stop the leak, BP wants to keep oil from gushing into the Gulf again before the eyes of the world. The government's plan, however, is to eventually pipe oil to the surface, which would ease pressure on the fragile well but require up to three more days of oil spilling into the Gulf.

Both sides played down the apparent contradiction Sunday. Allen, ultimately the decision-maker, later said the containment plan he described Saturday hadn't changed, and that he and BP executives were on the same page.

The company very much wants to avoid a repeat of the live underwater video that showed millions of gallons of oil spewing from the blown well for weeks.

"I can see why they're pushing for keeping the cap on and shut in until the relief well is in place," said Daniel Keeney, president of a Dallas-based public relations firm.

The government wants to eliminate any chance of making matters worse, while BP is loath to lose the momentum it gained the moment it finally halted the leak, Keeney said.

"They want to project being on the same team, but they have different end results that benefit each," he said.

Oil would have to be released under Allen's plan, which would ease concerns that the capped reservoir might force its way out through another route. Those concerns stem from pressure readings in the cap that have been lower than expected.

Scientists still aren't sure whether the pressure readings mean a leak elsewhere in the well bore, possibly deep down in bedrock, which could make the seabed unstable. Oil would have to be released into the water to relieve pressure and allow crews to hook up the ships, BP and Allen have said.

Engineers are looking to determine whether low pressure readings mean that more oil than expected poured into the Gulf of Mexico since the BP-leased Deepwater Horizon rig exploded April 20, killing 11 people and touching off one of America's worst environment crises.

To plug the busted well, BP is drilling two relief wells, one of them as a backup. The company said work on the first one was far enough along that officials expect to reach the broken well's casing, or pipes, deep underground by late this month. The subsequent job of jamming the well with mud and cement could take days or a few weeks.

It will take months, or possibly years for the Gulf to recover, though cleanup efforts continued and improvements in the water could be seen in the days since the oil stopped flowing. Somewhere between 94 million and 184 million gallons have spilled into the Gulf, according to government estimates.