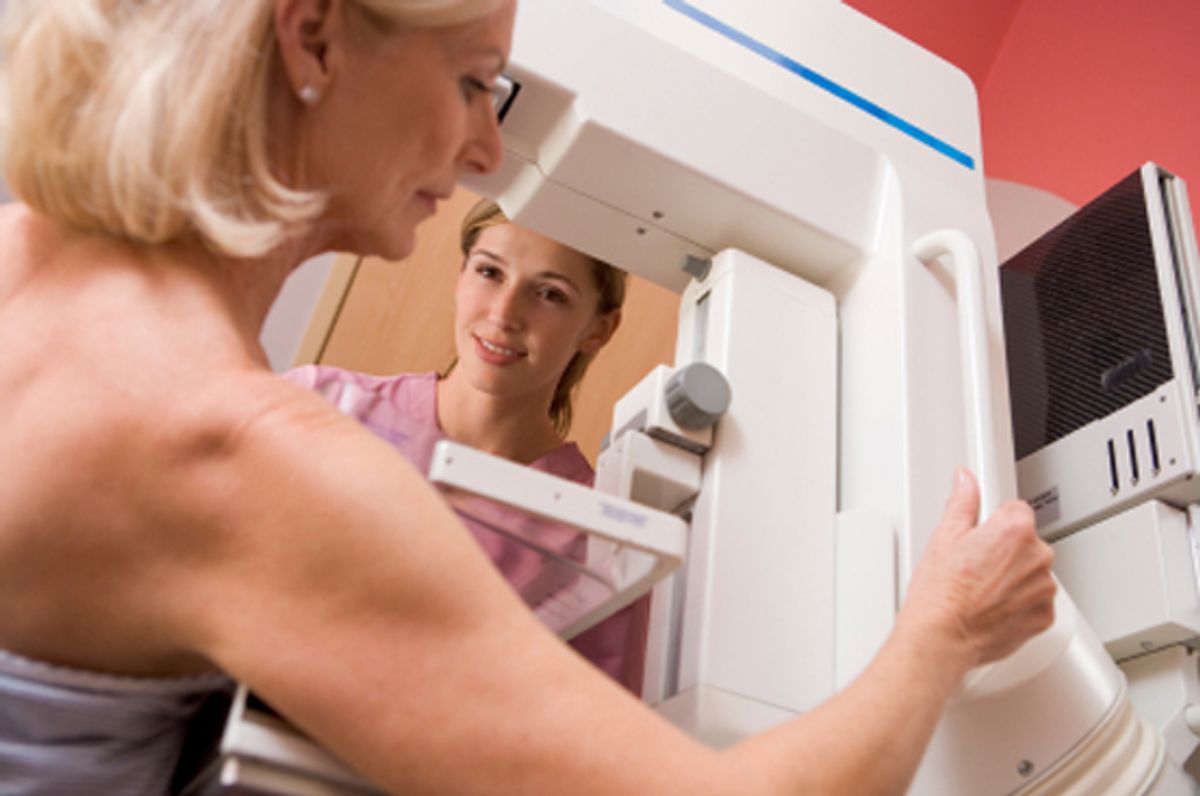 Just as the White House is affirming breast cancer screenings as key preventive care that will soon be accessible without co-pay, here comes news that the earliest screenings and biopsies are often pockmarked with errors. A New York Times report tells of cases like Monica Long, a nurse in northern Michigan, who was diagnosed with breast cancer after an early biopsy. She went through radiation, a partial mastectomy, and no small amount of emotional turmoil — only to learn, a year and a half later, that she probably didn't have cancer at all.

It's devastating. It's deplorable. It's other dramatic adjectives as well — but the most frightening one of all is that it is common.

How does it happen?

Ironically, it comes down to advances in screening technology for breast cancer. While sharpened tools for mammography and biopsies are intended to provide accurate screenings as early as possible, they in fact are putting pathologists in a position to determine whether the tiniest of images — the size of a grain of salt — are or are not indications of cancer. Common wisdom holds that the earlier cancer is detected, the better chances are for survival. Technology has brought us an inconvenient hiccup, however: We are able to detect the smallest manifestations of breast cancer, but the images are easily confused with tiny benign forms. In fact, the Times suggests that up to 17 percent of invasive breast cancer — ductal carcinoma in situ, or DCIS — is misdiagnosed through a commonly used needle biopsy. This isn't exactly news, either. In 2006, Susan G. Komen for the Cure released a study that estimated that in 90,000 cases, women who receive a DCIS diagnosis either do not have the disease at all, or their pathologist makes a mistake that leads to them receiving the wrong treatment (too often leading to a change in the disease's outcome). Each year, more than 50,000 American women are diagnosed with DCIS.

Diana Rowden, Susan G. Komen survivorship and outcomes vice president, told Broadsheet: "The takeaway is that breast pathology is a very complex science and art. Women need to be aware of this and not assume the first piece of information they receive is correct." Rowden urges women to seek out specialists in breast surgery and pathology to ensure the most accurate results, either in person or by sending pathology slides elsewhere.

All the same, the federal government is maintaining its support for regular mammographies; the U.S. Preventive Services Task Force lists it as health care that must be available at no cost under new private health insurance plans. But this is the very same task force that last year suggested that women between the ages of 40 and 50 don't need regular mammograms — a move that inspired no small amount of controversy. According to the Times, the federal government is also funding a nationwide study on the variations in technology used to detect breast cancer. And the College of American Pathologists intends to create a voluntary curriculum and certification program for pathologists who read breast tissue, requiring that they read 250 breast cancer screenings a year to be certified. (CAP is still urging women to receive screenings in order to detect the disease "in its earliest stages.")

So maybe health strategies around breast cancer will catch up to technological advances. But in the meantime, the conflicting messages persist. Women who are diagnosed with the very early stages of breast cancer face a tough choice. They can take immediate action with treatments, including radiation and surgery, intending to increase their chance of putting the cancer into remission — this is what their pathologist, who diagnosed the cancer, will likely push — or these women can be cautious, holding off on treatment until there are more certain indications that the diagnosis was a mistake. Waiting could save them time, money and trauma — but taking action could save their life.

Rowden says the choice isn't as urgent as it can seem, especially for a DCIS diagnosis. "So often, people feel like they have to make a decision now and have surgery next week," Rowden said. "Waiting a few weeks is not going to change the outcome of most early stage breast cancer."