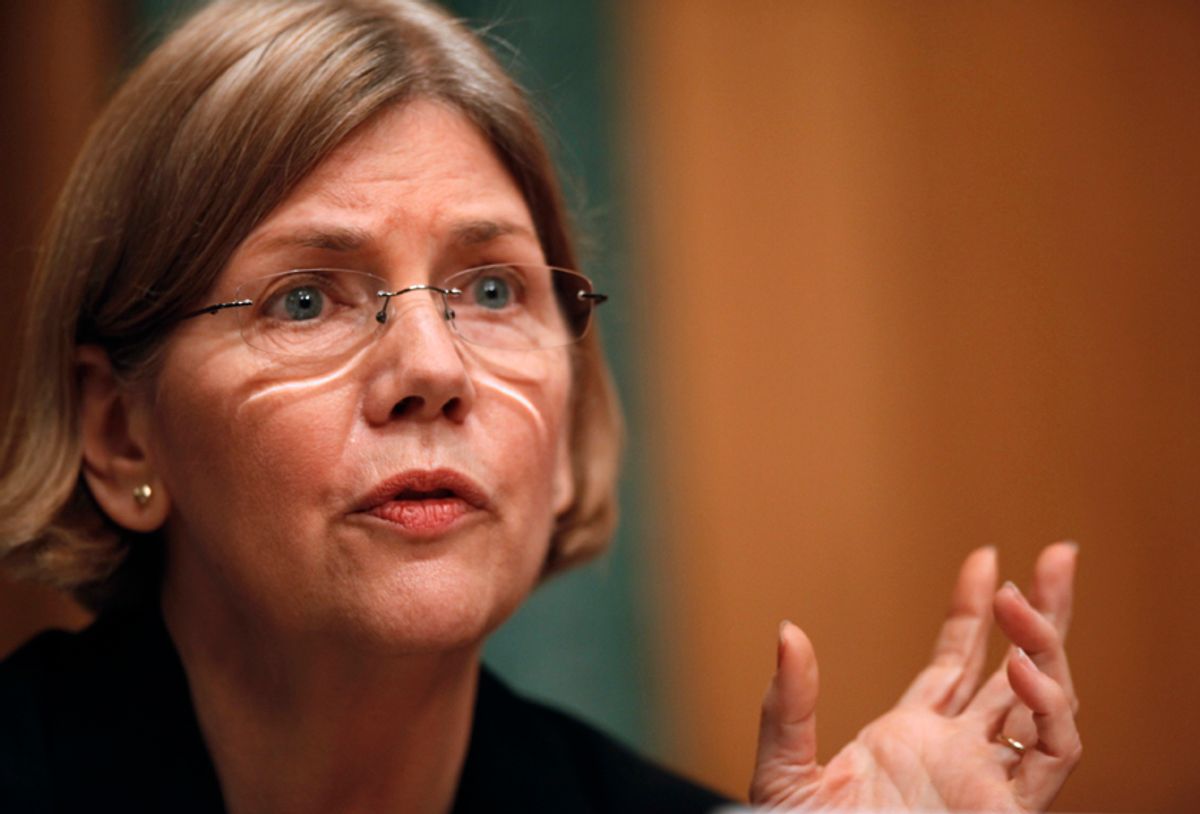 One week ago, the Huffington Post's Shahien Nasiripour "reported" that Treasury Secretary Tim Geithner opposed the potential appointment of Harvard law professor Elizabeth Warren as the first director of the Consumer Financial Protection Bureau. I use the air quotes, because, as these things go, Nasiripour's story was on the severely emaciated side of thinly sourced. The accusation may well be true, but the meat of the article was attributed to a single anonymous source "familiar" with Geithner's views and yet did not include even one quote from that source.

Some of the same people who would be quick to scorn such reporting as highly dubious had it appeared in the New York Times or Washington Post — as likely to be a plant by Warren's supporters looking to pick a public fight as it was a real leak from the Geithner camp — immediately treated the story as proven fact. It's been embarrassing, really, to see how much second- and third- and fourth-day coverage has started with the presumption that Geithner is blocking Warren, on the basis of nothing more than a single Huffington Post story.

For progressives in particular, Nasiripour's "scoop" offered yet another opportunity to vent their antipathy toward Geithner's Treasury — and to mobilize. In the ensuing days, progressives have organized an impressive campaign to pressure President Obama into appointing Warren — declaring, in essence, that anyone else would represent yet another capitulation to Wall Street. More than a 100,000 signatures have been gathered in support of a Warren nomination, liberal Democratic senators are on the warpath, and the AFL-CIO has thrown in its support. The mainstream media is all over the story.

Nobody has a better claim to be the first director of the CFPB than Warren. She dreamed up the idea of such an agency in the first place, and she has been a tireless consumer advocate her entire career. Her tenure as chair of the Congressional Oversight Panel looking into TARP has been dogged — and certainly put her at odds with Tim Geithner on several occasions. Never mind the quibbles; nominating Warren would make a bold statement that Obama's intent to ensure bank reform will have teeth.

But make no mistake — the appointment will almost undoubtedly be filibustered by Republicans, and it is a tough call as to whether Warren would ultimately be confirmed. Too much of the coverage of the Warren controversy assumes that if Obama just has the guts to nominate her, it's a done deal. But it's not. As with bank reform in general, the power to confirm Warren resides in a handful of so-called moderate Republicans. It's a sad and depressing commentary on the state of affairs in American politics today, but even with 59 Democratic senators, Scott Brown, R-Mass., has more power to decide a Warren appointment than Obama.

I'm in the camp that says appoint her anyway — and if the GOP won't confirm her, then make a unilateral recess appointment at the first opportunity. I don't think you could ask for a better narrative backdrop to the midterm election campaign than the sight of a united Republican Party filibustering the appointment of a consumer advocate ready to run an agency devoted to protecting Americans against the depredations of Wall Street. I would love to watch the likes of Republican senators Jim DeMint and Richard Shelby lay into Warren during televised hearings. And I would love to see Obama stick it to them by pushing her appointment through regardless.

But as the fight over extending unemployment benefits just demonstrated, the vast majority of Republican senators have absolutely no problem with adhering to stances that do not seem to make political sense. Attacking Warren as the latest Obama socialist atrocity will no doubt play just as well with the Tea Party base as defending her will motivate progressives. The most likely scenario would be a protracted struggle that results in no appointment at all in the near term — and an agency that is hamstrung from its creation. That might be good politically but not so great substantively.

It might be surprising to see Obama nominate Warren, but it certainly wouldn't be surprising to see him demur. At this point in the Obama administration, if we know anything, we know that the president doesn't like to pick fights he can't win, and that his first impulse is to compromise and play it cautious, if that's the best way to get a bill passed or a Supreme Court justice appointed. This has resulted in the now-familiar Obama paradox. The right hates him because of what he has managed to achieve, while the left is pissed at him for what he hasn't even tried to achieve. He's shepherded two of the biggest pieces of transformative legislation through Congress in a decade, and no one is happy. The Warren contretemps re-summarizes this story line all too well. If Obama decides to nominate someone he thinks has a better chance of being promptly confirmed, progressives, who have neatly boxed themselves in on this issue, will accuse him of yet another pusillanimous failure of nerve. But let's be clear here: The choice is not between Warren or someone else — the choice is between someone else and a knock-down, drag-out fight with Senate Republicans in which Obama has almost zero leverage.