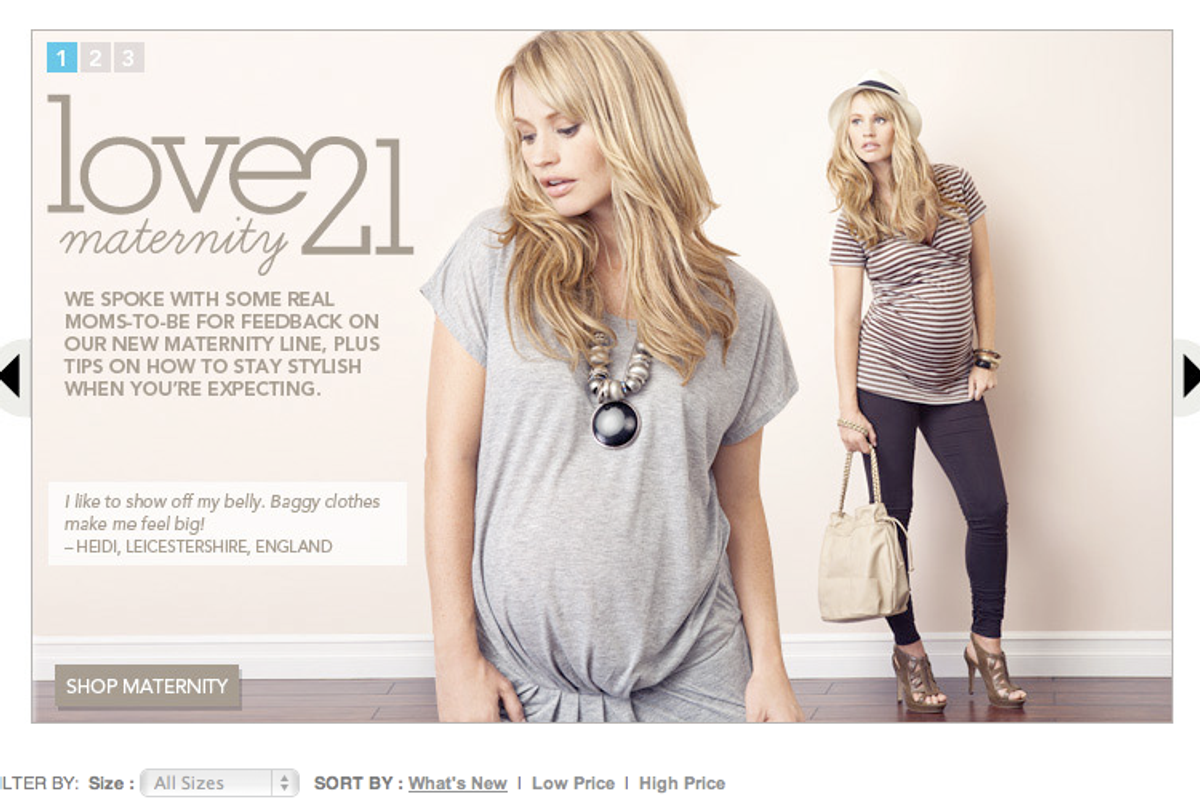 I recently marveled at the sheer ginormousness of the Forever 21 store that opened in downtown Washington D.C. this weekend. Occupying a former multi-level furniture store space, it is a far cry from the tiny mall outposts that used to comprise the chain. But, thanks to Forever 21's ability to feed teens' insatiable appetite for "fast fashion" -- pieces that replicate the most up-to-the-minute trends at prices (and quality) so low that they’re usually worn only a few times and discarded -- the chain has snowballed into a $2 billion brand that legitimately competes with behemoths like H&M.

Despite all of that success, Forever 21 is still looking to appeal to even more girls. Having already reached out to plus-sized customers with the launch of its Faith 21 line last year, the chain has unveiled a new effort aimed at the temporarily plus-sized, i.e., expectant mothers. Given that the store as a whole targets tweens and teens, dedicating a portion of the store to maternity clothes is understandably causing a stir. On top of that, there is the fact that the maternity line is premiering in five states, three of which carry the highest teen pregnancy rates in the country.

Over-reactive parents and pundits constantly point a finger of blame at any slice of pop culture that deals with teen pregnancy, saying TV shows and movies like "The Secret Life of the American Teenager," "The Pregnancy Pact," "16 and Pregnant," "Juno," etc. are encouraging young girls to get knocked up. This, despite declining numbers of teen pregnancies and the fact that the shows often bend over backward to depict the difficult realities of young motherhood.

While those assertions assume an insulting lack of agency on the part of young women, the recent wariness over Forever 21's maternity line is much more in line with reality. Forever 21's most recognizable model is Kendall Jenner, the 14-year-old half sister of Khloe, Kourtney and Kim Kardashian -- suggesting that the brand makes a concerted effort to court customers who can't yet drive themselves to the mall. Magazines targeting adolescent girls, like Seventeen, are constantly promoting Forever 21 goods in spreads on affordable fashion finds.

Much has been made of Bristol Palin, who has parlayed her ordeal as a teen mom into lucrative speaking engagements, TV appearances and magazine covers – gigs that carry an underlying message about the possible benefits of teen pregnancy no matter how many abstinence PSAs she phones in. The same is true for Forever 21. Of course they're not explicitly endorsing teen pregnancy, but by nudging teens and saying "If you do find yourself pregnant, looking fashionable is one less thing you'll have to worry about!" the chain is going the Bristol route of unwittingly glamorizing teen pregnancy.