Journolist, the Rev. Wright, Sarah Palin -- and me

Was the listserv really a "conspiracy" to suppress reporting on Wright and help Obama? If so, I never got the memo 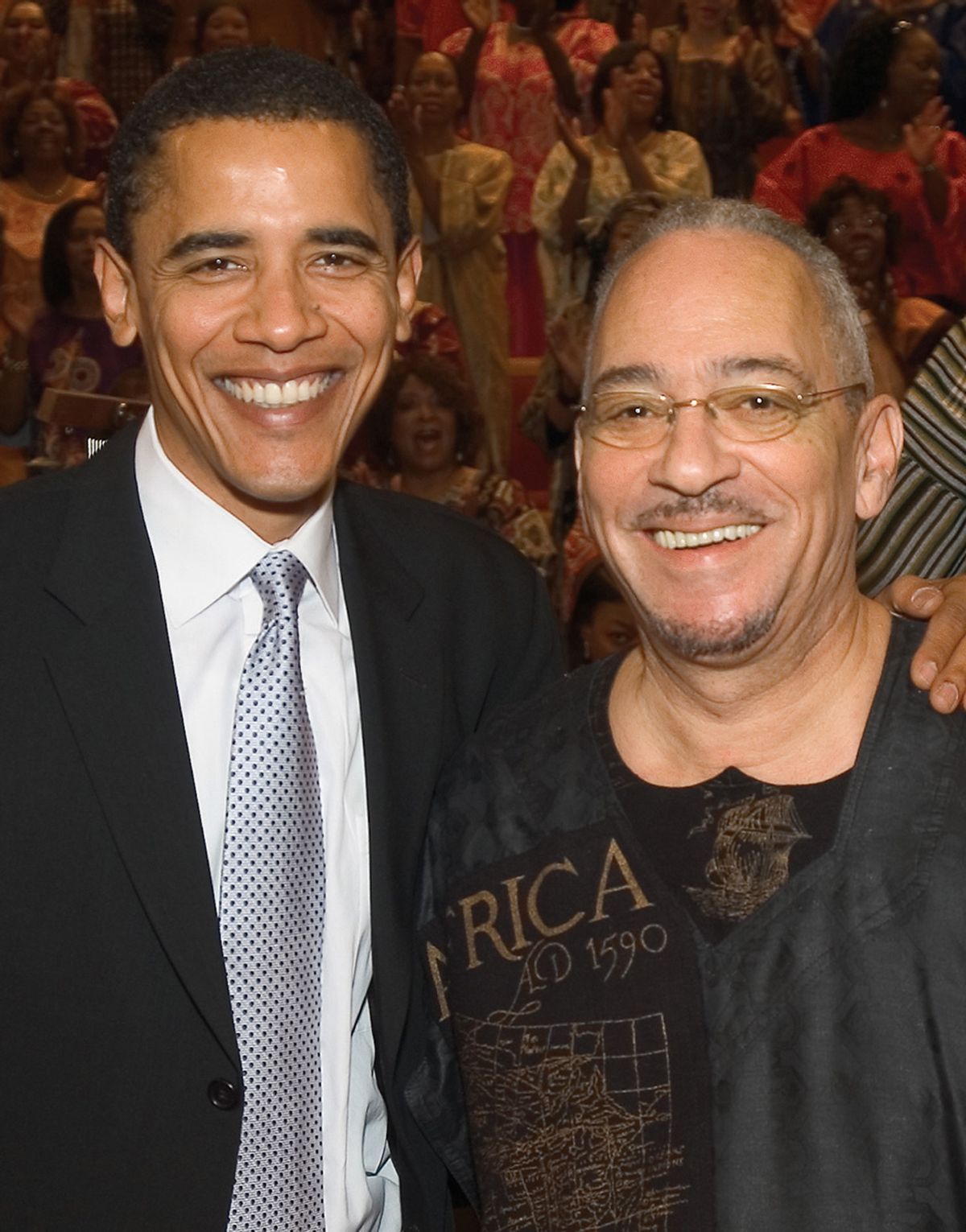 ** FILE ** In this undated photo from Trinity United Church of Christ, Democratic presidential candidate Sen. Barack Obama, D-Ill., left, poses with the church's pastor, Rev. Jeremiah Wright in Chicago. John McCain and Barack Obama, both seeking to use religion to their advantage in their presidential campaigns, have learned painful lessons about the risks of getting too close to religious leaders. Both failed to realize that sermons that get a narrow audience on Sundays don't play as well on the national stage. (AP Photo/Trinity United Church of Christ, File) (Associated Press)
--

Now that major thinkers like Andrew Breitbart and Sarah Palin have weighed in on the earthshaking issue of Journolist — a defunct listserv of writers and academics once moderated by the estimable Ezra Klein — how can I ignore the topic? Both Palin and Breitbart are almost incomprehensible on the subject, but I can at least tell that they think this is very, very, very important. A "bombshell"!

Besides, I’ve been identified not only as a member (or former member) of Journolist but also as a conspirator in the composition of an open letter criticizing the April 2008 ABC News Democratic primary debate. My sole contribution was the obvious suggestion that the letter should quote the harsh judgment of the debate published in the Washington Post by Tom Shales. (I analyzed that sorry performance under my own byline here as well.)

According to Tucker Carlson’s Daily Caller, that open letter — an act of public criticism — was really a nefarious attempt to suppress discussion of the Rev. Wright. "Documents Show Media Plotting to Kill Stories About Rev. Jeremiah Wright," trumpets the headline. But the conspiracy accusation appears to be based on intemperate quotes from a single post by Spencer Ackerman, duly ignored by everyone else on the list.

Palin, Breitbart and other excitable right-wingers say that Journolist is proof that "lamestream" reporters were conspiring to help Obama. Andrew Sullivan chimes in to depict the list as "an attempt to corral press coverage and skew it to a particular outcome," which it certainly was not. (He then seizes the occasion to post a few paragraphs of self-serving pap.)

Here in the reality-based world, Journolist was nothing but a harmless pastime that had little discernible effect on the writing of those who subscribed, and none on the media more generally. I stopped posting there or reading it many months ago, mostly because I no longer had time. But without violating anybody’s privacy, I can say that very few reporters for mainstream news organizations ever posted there, and none took part in the composition or publication of that open letter.

Finally. as a columnist who endorsed neither Obama nor Clinton during the primaries (and criticized both), I should mention that I discussed Wright on more than one occasion — including a column that appeared on May 1, 2008, two weeks after the ABC debate, after the pastor addressed the NAACP convention:

As the Rev. Jeremiah Wright gleefully tours the airwaves, inflicting severe political damage with almost every utterance, he is proving that racism isn't the only obstacle to a black president. The historic prize is almost within the grasp of one of the most talented politicians America has ever seen, yet what seems most likely to frustrate Barack Obama now is not white prejudice but the frivolity, egotism and pettiness of those who should be his most serious and dedicated supporters.

To criticize Wright is not to reject the black church, the speaking styles of black preachers, the aspirations of black children or the rhythms and tonalities of black music, as he suggested in his address to the NAACP last weekend. To reject his ideas about the origins of AIDS or the causes of 9/11 is not, as he puts it, to confuse "different" with "deficient."

Somehow his self-serving formulations seem to be approved by many black leaders, if the audience response in Detroit provides any measure. And that apparent approval reinforces doubts raised by Wright's televised remarks in the minds of many Americans who might well vote for Obama but now wonder whether they know him well enough.

Those Americans probably don't care about the Democratic front-runner's bowling skills, his dietary preferences or even his unusual name. What they do care about is his dedication to this nation's great promise and his capacity to transcend the old bigotries that have disfigured us. What matters is whether he shares their deepest values and loyalties — whether his vision of America resembles theirs or not.

It was highly predictable that Wright's most offensive quotations — selected and broadcast by the mass media — would be deployed to embarrass Obama as soon as he fulfilled his mission of derailing Hillary Clinton. (It was, in fact, predicted in this space last January.) It was almost as predictable that when the moment arrived to choose between the aspirations of Obama and the bloviations of Wright, too many of America's black leaders and pundits would feel obliged to defend the latter — no matter how indefensible and no matter what the cost.

So long as a religious or political leader sounds sufficiently "militant" and seems to outrage white people, he (or she) must be not only accepted and celebrated.

That is why Minister Louis Farrakhan — the Nation of Islam leader who shares responsibility for the conspiracy to murder Malcolm X and whose theology of hovering spaceships and evil big-headed scientists is highly eccentric, to be polite — enjoys fulsome admiration from the likes of Wright. That is why the Rev. Al Sharpton — who was paid and financed by Republican dirty tricksters in 2004 — still somehow wields influence in the media and politics. And that is why Wright himself can insinuate that the government purposely invented AIDS, and claim that the brains of white and black children function differently (a notion that would rightly be dismissed as racist idiocy coming from a white academic or preacher).

Far more challenging, for any black statesman or minister, is being the leader who at his best hopes to lift America above racial, religious and ethnic paranoia on all sides — that is, to be Barack Obama.

Perhaps the most repulsive aspect of Wright's sudden celebrity is that he has elevated himself by stepping on the head of his former parishioner. Charismatic and clever as the reverend may be, his theories would not command two minutes of national airtime except for the remarkable rise of the Obama campaign. That he would not hesitate to ruin a young man who loved him like a father shows a deep flaw in his character, unredeemed by his religious cant.

How Obama can escape his toxic mentor is not clear. His remarkable speech on our persistent racial divisions necessarily pierced the illusion of transcendence raised by his campaign, but then resurrected the possibility of perfecting our union. Recognizing the fallible humanity in Wright as in himself and the rest of us, he hesitated to enunciate a complete rejection. Now it may be too late.

But responsibility for the ruin of the Obama promise will not fall upon the Illinois senator alone. The enablers of Jeremiah Wright should ask themselves why they have collaborated in his self-promotion. If he truly wanted change, as he told the NAACP, he would have maintained a wise silence, and they would not have offered him a platform. There is nothing new in this dispiriting display of bogus defiance. We've seen this show too many times already.

How could I have forgotten my marching orders so soon?