In a ploy to stay afloat, the brand launches a supposedly office-friendly website with nearly naked chicks 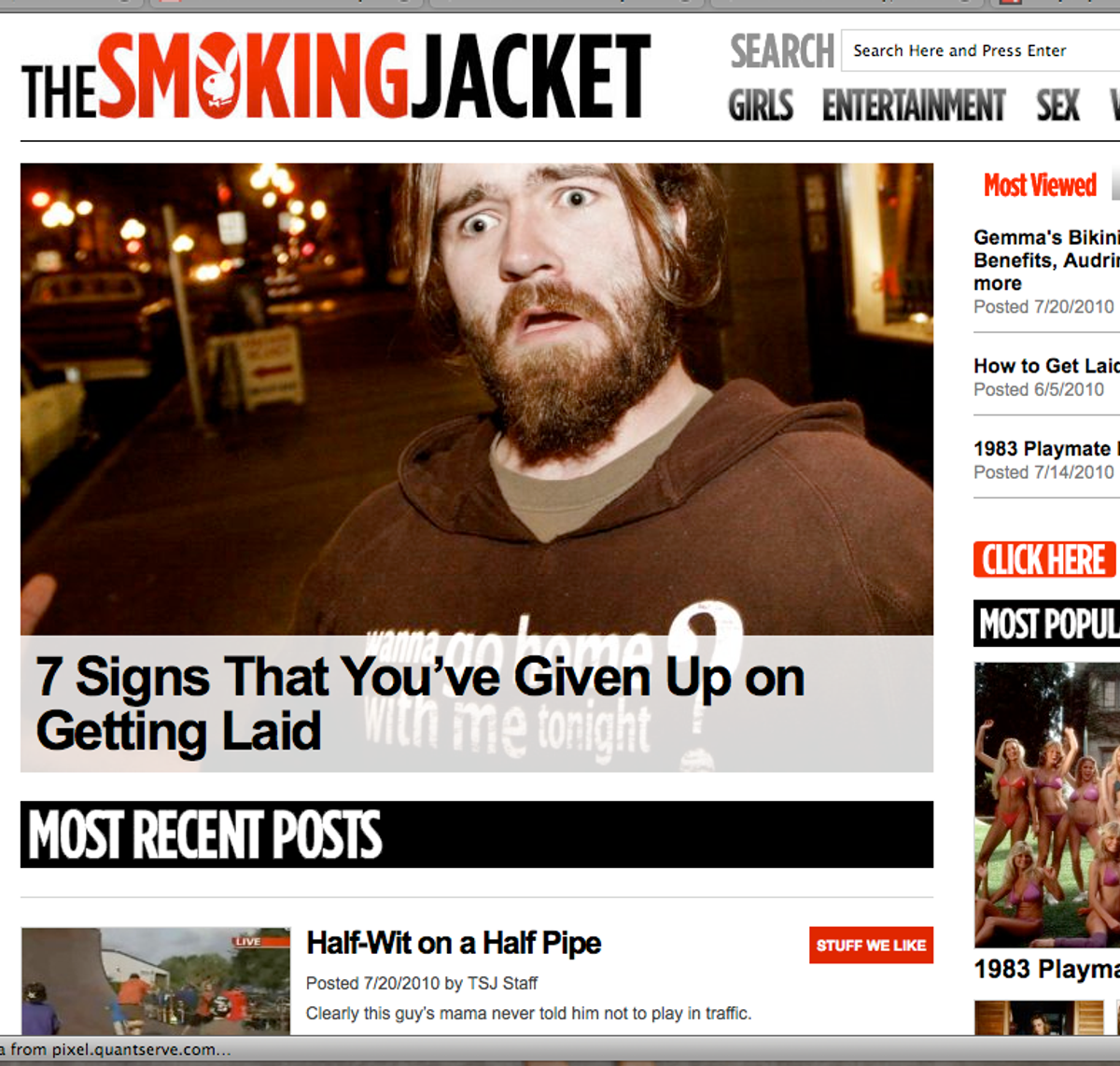 If you spend your days wondering a) how get laid at work, b) what strippers look like when they're cage fighting or c) whether the words "tit" and "piñata" can successfully form a descriptive phrase, fear not, Playboy has a new website just for you. From the folks who have been bringing you their luscious mix of nipples and long-form journalism since time immemorial (er, 1953), comes The Smoking Jacket, a new venture that contains neither of those things.

Instead, the site — which is meant to serve as the "safe for work" cousin of Playboy.com — reads like College Humor met Maxim at a frat party and then the two of them ran straight out and iced a couple bros. With features like an advice column on "how to hang out with porn chicks" and a video on the memoir-worthy topic "a day in the life of my boobs," The Smoking Jacket is a Playboy alternative you can page through in your cubicle without accidentally stumbling across a naked photo of Kim Kardashian or an interview with public intellectual Cornel West. Because what's more awkward than your boss discovering your interest in the racial undertones of American politics?

By flaunting a site that features links to "Audrina's bongos" and photo galleries of scantily clad playmates as "safe for work," however, the creators of TSJ raise a simple question: What exactly does Playboy think renders something fit for office consumption? I don't know about you, but my boss might not appreciate it if she came up behind my desk and saw that the page open on my computer commanded in large, bold font, "DON'T REFER TO YOUR PENIS BY ITS NICKNAME." About the only way I can imagine this content being appropriate to browse at work is if you work at the Playboy HQ.

"Safe," on the other hand: Now that's a flavored condom of a whole different color. Because what "safe for work" really seems to mean to Playboy is simply, "Your company's Internet filters won't block this site!" And let's be honest, for guys off in search of the mildly smutty during their 9 to 5, that's probably all they ask for.

And for Playboy, which lost more than $1 million in the first quarter of this year and has long teetered on the edge of financial disaster, it offers a chance to keep their brand afloat by broadening their audience from "dudes who want to look at naked ladies after work" to also include "dudes who want to look at mostly naked ladies during work." As Hef himself promises in an introductory video (in which he wears — wait for it, wait for it — a smoking jacket), "next to the mansion, [The Smoking Jacket] is the best hangout on the planet." But if your job is so terrible it sends you running to this particular man cave, maybe it's time to stop considering what's "safe for work" and just find a new job.