Andrew Breitbart lies about a USDA appointee, and a cowardly White House forces her out as a result 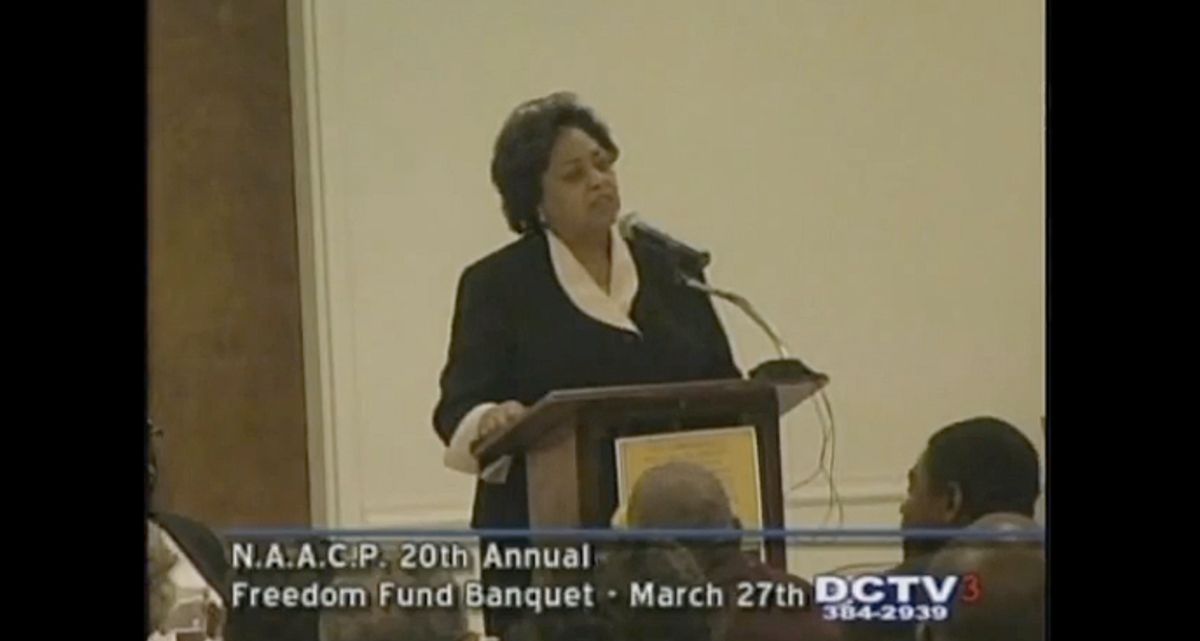 Sweaty conservative culture warrior and Internet publisher Andrew Breitbart won yet another scalp today when Shirley Sherrod, the U.S. Department of Agriculture's rural development director for Georgia, was forced to resign for the offense of appearing in an obviously edited video clip that was posted to one of Breitbart's websites.

Sherrod was speaking to a Georgia chapter of the NAACP. In the speech, according to Breitbart's characterization, Sherrod is explaining how she refused to help a white farmer as much as she could have because she preferred to help black people. Breitbart:

We are in possession of a video from in which Shirley Sherrod, USDA Georgia director of rural development, speaks at the NAACP Freedom Fund dinner in Georgia. In her meandering speech to what appears to be an all-black audience, this federally appointed executive bureaucrat lays out in stark detail that her federal duties are managed through the prism of race and class distinctions.

The speech wasn't to an all-black audience (though the specter of black people revealing their contempt for whitey in closed-door meetings of fellow black people seems to drive a lot of conservatives into a paranoid frenzy), as the mayor of Douglas, Ga., was among the white attendees. And the story Sherrod told was about her work 24 years ago for the Federation of Southern Cooperatives/Land Assistance Fund, not "her federal duties." So, that's a lie. Andrew Breitbart is lying in this paragraph. Just for the record. Andrew Breitbart lies.

(The video intro, prepared by God knows who, also says that "Ms. Sherrod admits that in her federally appointed position overseeing a billion dollars ... she discriminates against people due to their race." Again: This is a story from when she worked for an advocacy organization and fund, not the government.)

"What he didn't know while he was taking all that time trying to show me he was superior to me was, I was trying to decide just how much help I was going to give him," she said. "I was struggling with the fact that so many black people had lost their farmland, and here I was faced with having to help a white person save their land. So I didn't give him the full force of what I could do. I did enough."

The Federation of Southern Cooperatives was chartered in 1967 for the express purpose of forming, aiding and developing co-ops for black farmers and landowners. Even now, while it has branched out into helping poor people of any race own their own land, its mission statement reads:

We strive toward the development of self-supporting communities with programs that increase income and enhance other opportunities; and we strive to assist in land retention and development, especially for African Americans, but essentially for all family farmers.

Sherrod belonged to an organization set up during the civil rights era specifically to help black farmers. So, yes, she had some reservations the first time she was approached for help by a white farmer. Then she sent him to a white lawyer for help, because she thought the white lawyer would help one of his own kind. But she learned an important lesson that day: When you're poor, no one wants to help you, no matter your race!

Because the entire point of Sherrod's story was to illustrate how her eyes were opened to that fact, she went on in her speech to explain that she "eventually worked with the man over a two-year period to help ward off foreclosure of his farm and ... eventually became friends with him and his wife."

This has been corroborated by the actual discriminated-against white people in question.

But that part isn't in the clip that Breitbart posted. Because it undermines the entire premise of his post, which is that the NAACP and Barack Obama are racist against white people. (Also because Breitbart says he doesn't have the entire speech, which makes his very comprehensive-sounding post on the speech even better.)

This is not just a matter of missing the context of Sherrod's remarks. People are imagining what she actually said based on how Andrew Breitbart framed his obviously edited clip. The content of said clip does not matter. Andrew Breitbart could put up a clip of Jordy singing "Dur dur d'être bébé!" under the headline "VIDEO SHOCK: ACORN RACIST IS OBAMA APPOINTEE" and as long as it included his picture above the text, it would lead to calls for the resignation of HUD Secretary Shaun Donovan.

But in this instance, the cowardliness of the White House cannot be overstated.

Over nothing. Over less than nothing, in fact. Over complete bullshit! Bullshit so obvious that it completely fell apart in less than 24 hours. I expect this sort of behavior from the craven fools at the Washington Post, but from the White House it's dismaying. And baffling.

Update: The White House says this was all Tom Vilsack's call. But they stand by it. Of course.  According to Vilsack's statement, the perception of a controversy, even where non exists, "would create situations where her decisions, rightly or wrongly, would be called into question making it difficult for her to bring jobs to Georgia." So, that's pretty much license to make shit up about any low-level federal employee you want canned, I guess.