A Spanish watermelon soup for the summer 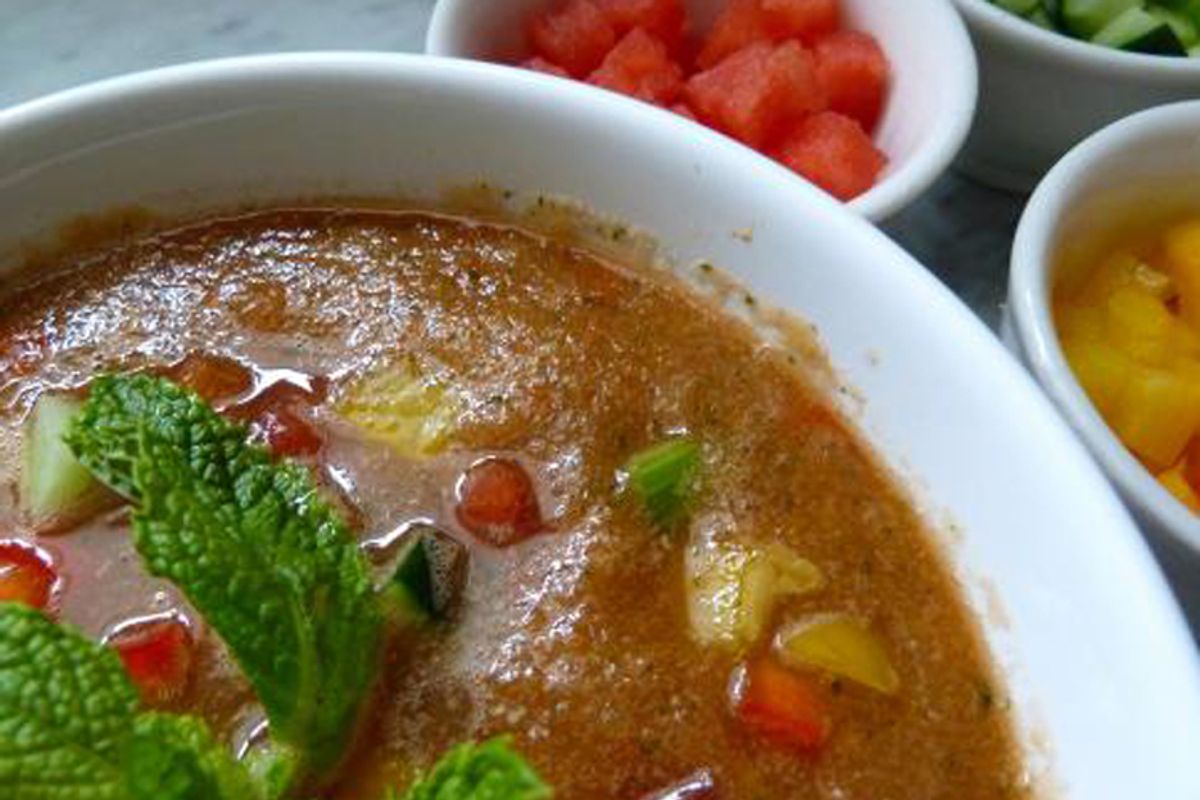 On a sultry, sweltering, hot summer night, the kind that we can only imagine in San Francisco, there's nothing worse than slaving over a hot stove. And there's nothing more refreshing than savoring some juicy slices of watermelon and sipping a chilled soup.

I am still thinking about the south of Spain, where I left off last week. These are hot and sultry summers, the kind that gave birth to the passion of flamenco, the need for siestas, and the iconic chilled soup known as gazpacho. Served as part of a meal or as a drink, gazpacho is ubiquitous in Spanish culture.

My first taste of gazpacho was a visual one, in Pedro Almodóvar's 1988 comedy, "Women on the Verge of a Nervous Breakdown." This is the film that introduced the world to Antonio Banderas. Gazpacho is not only served in the film; it is the leitmotif, and could even considered one of the main characters.

In the pivotal scene below, the cast sits around drinking glasses of gazpacho, some of them passing out because, well, this one happens to be drugged.

In the book "Almodóvar on Almodóvar," the filmmaker comments on his use of gazpacho in the plot. It is clear that this is a very special and powerful gazpacho:

"The gazpacho in the film is a kind of magic potion. Like the potion in "A Midsummer's Night's Dream," it can change the life of the person who drinks it and transport them to another world. The gazpacho transforms Rossy de Palma into a real woman."

This "magic potion," the traditional Andalusian gazpacho consumed in the film, has roots as far back as the Romans in the third century B.C., further influenced by the 800 years of Moorish presence. The word "gazpacho" is thought to derive from the early Roman word "caspa," meaning remnants or fragments. "Gazpacho" is also slang in Spain to mean confusion or predicament. Both meanings apply to its use in "Women on the Verge of a Nervous Breakdown."

Gazpacho started as a simple peasant food, originally composed of leftovers: stale bread, garlic, olive oil, salt and vinegar. When the tomato was introduced from the New World, this was added, transforming the original soup into the familiar raw tomato soup that Pepa makes in the film. Traditionally, it was made using a mortar and pestle, but most cooks today, like Pepa, use a blender. Gazpacho is usually served with garnishes consisting of chopped versions of the vegetables used in the soup, as well as croutons.

Modern Spanish chefs have further added to the mix by making gazpacho out of fruit, with the sweetness tempered by savory flavors and garnishes. I always enjoy a combination of the sweet and the savory. And I absolutely love it when history brings seemingly unconnected flavors together. Watermelon is just as refreshing as gazpacho, and both trace their Spanish origins to the Moors, who took watermelon from Africa to Europe in the 13th century. In that spirit, and in tribute to the great Pedro Almodóvar, here's a gazpacho made of watermelon and cucumbers. It'll knock you out.