Though dwarfed by the BP catastrophe, the mess in the Yellow Sea had more than doubled by Wednesday 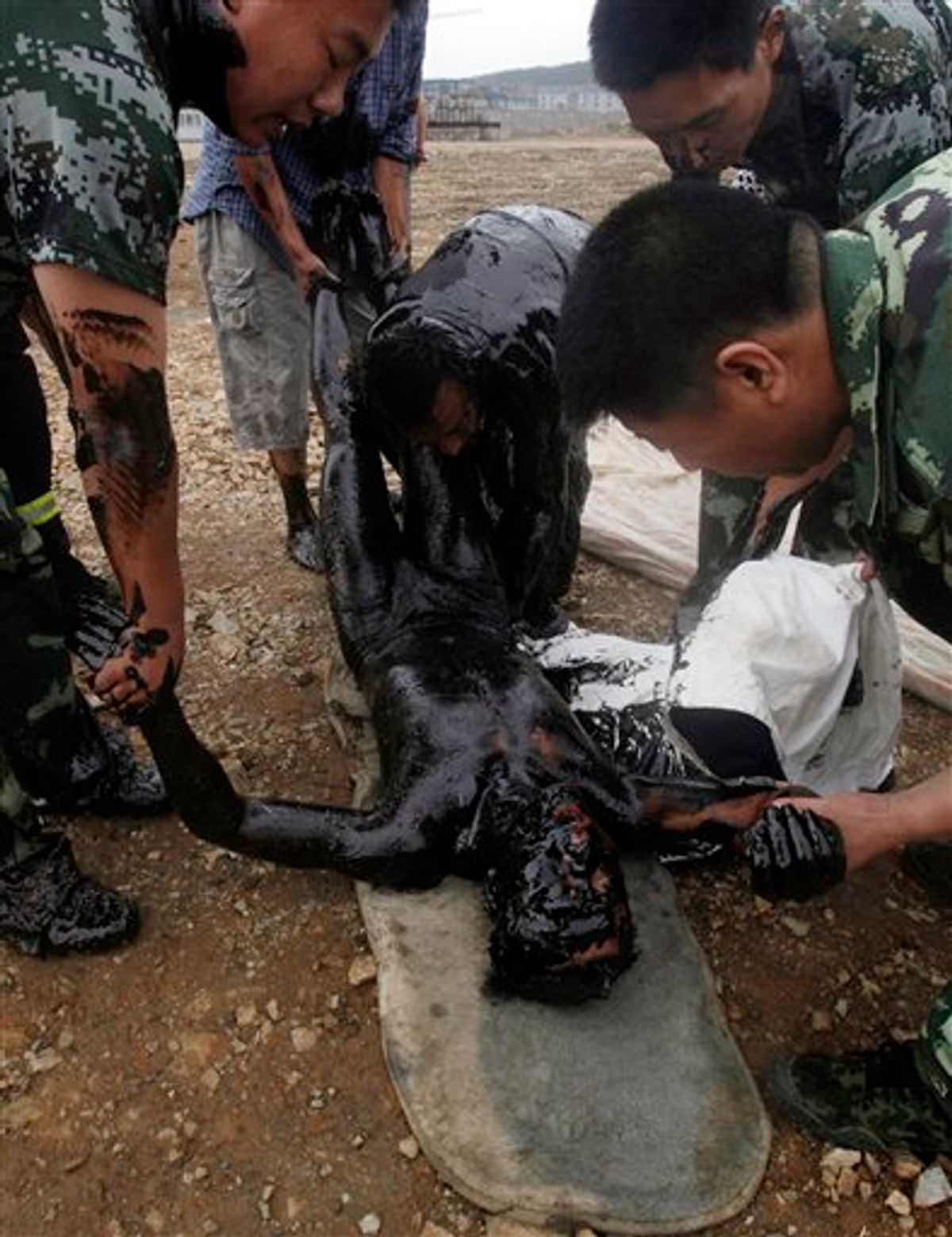 In this photo released by Greenpeace, a firefighter who was submerged in thick oil during an attempt to fix an underwater pump is brought ashore by his colleagues in Dalian, China on Tuesday, July 20, 2010. Crude oil started pouring into the Yellow Sea off a busy northeastern port after a pipeline exploded late last week, sparking a massive 15-hour fire. The government says the slick has spread across a 70-square-mile (180-square-kilometer) stretch of ocean. (AP Photo/Jiang He, Greenpeace) ** NO SALES NO ARCHIVE ** (AP)
--

China's largest reported oil spill had more than doubled by Wednesday, closing beaches on the Yellow Sea and prompting an environmental official to warn the sticky black crude posed a "severe threat" to sea life and water quality.

Some workers trying to clean up the inky beaches wore little more than rubber gloves, complicating efforts, one official said. But 40 oil-control boats and hundreds of fishing boats were also deployed in the area.

"I've been to a few bays today and discovered they were almost entirely covered with dark oil," said Zhong Yu, a worker with the environmental group Greenpeace China, who spent Wednesday on a boat inspecting the spill.

"The oil is half-solid and half liquid and is as sticky as asphalt," she told The Associated Press.

The oil was spread over 165 square miles (430 square kilometers) of water five days since a pipeline at a busy northeastern port exploded. State media says no more oil is leaking into the sea, but the amount of oil spilled was not clear Wednesday. Based on the known figures, the spill is significantly dwarfed by the BP oil spill off the U.S. coast.

Greenpeace China released photos Wednesday of straw mats of about 2 square meters (21 square feet) in size scattered on the inky sea, meant to absorb the oil.

Zhong said it was still difficult for Greenpeace China to estimate the spill's real size and the damage it is causing.

But one maritime official with the city of Dalian, where the port is located, was already warning of environmental dangers.

At least one person died in cleanup efforts. A 25-year-old firefighter, Zhang Liang, drowned Tuesday when a wave threw him from a vessel and pushed him out to sea, the state-run Xinhua News Agency reported. Another man who fell in was rescued.

Officials at all levels were turning out on the beaches for cleanup, using sometimes makeshift equipment.

"We don't have proper oil cleanup materials, so our workers are wearing rubber gloves and using chopsticks," an official with the Jinshitan Golden Beach Administration Committee told the Beijing Youth Daily newspaper in apparent exasperation. "This kind of inefficiency means the oil will keep coming to shore. ... This stretch of oil is really difficult to clean up in the short term."

State Oceanic Administration released the latest size of the contaminated area in a statement Tuesday.

Though the slick has continued to expand -- it covered a 70-square-mile (180-square-kilometer) stretch earlier this week -- state media has said no more oil was leaking into the Yellow Sea.

The cause of the explosion that started the spill was still not clear. The pipeline is owned by China National Petroleum Corp., Asia's biggest oil and gas producer by volume.

Images of 100-foot-high (30-meter-high) flames shooting up near part of China's strategic oil reserves late Friday drew the immediate attention of President Hu Jintao and other top leaders. Now the challenge is cleaning up the greasy brown plume.

"Our priority is to collect the spilled oil within five days to reduce the possibility of contaminating international waters," Dalian's vice mayor, Dai Yulin, told Xinhua on Tuesday.

But an official with the State Oceanic Administration has warned the spill will be difficult to clean up even in twice that amount of time.

The Dalian port is China's second largest for crude oil imports, and last week's spill appears to be the country's largest in recent memory.

Some locals said the area's economy was already hurting from the spill.

"Let's wait and see how well they deal with the oil until Sept. 1, if the oil can't be cleaned up by then, the seafood products will all be ruined," an unnamed fisherman told Dragon TV. "No one will buy them in the market because of the smell of the oil."