AskMen.com: The dudes are all right

The site's Great Male Survey reveals a focus on family, and some surprising role-reversals 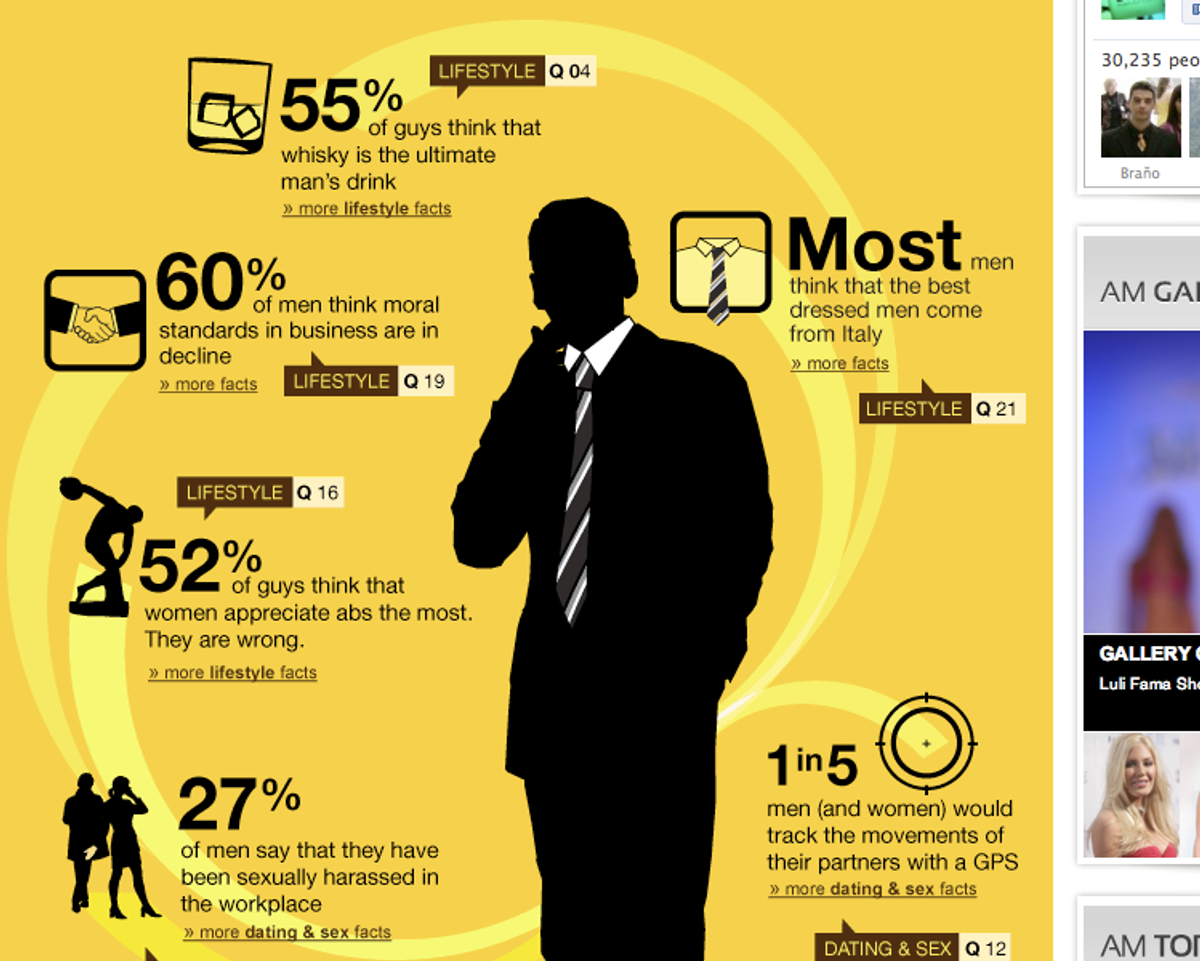 With great masculine ardor, AskMen.com has unveiled The Great Male Survey -- sound the vuvuzelas, alert the Old Spice guy! The poll of more than 100,000 men and women reveals a few no-brainers -- beer is considered the "ultimate man's drink" and exactly 0 percent of men wish they had a smaller penis -- but mixed in are some surprising, and surprisingly refreshing, findings about modern manhood.

"The ultimate male status symbol," according to respondents, isn't a fancy car or a Budweiser-sponsored man cave -- it's having a family. (Not to interrupt the chorus of "aww's" -- but "a beautiful wife or girlfriend" ranked third.) As for what "defines a 'real man' in 2010," they say it's "being a great father and husband who takes care of his family." That's either retro (man brings home the bacon) or progressive (man helps to support his family both financially and emotionally), depending on how you look at it; the same can be said for the rise of a family as the ultimate status symbol.

Frankly, you men make us women look a little superficial: Cosmopolitan magazine did a sister survey of their female audience and found that 46 percent rank a "beautiful house" as the ultimate status symbol, and a successful husband or boyfriend came in at second. Let me just point out, though, that the self-selecting survey was conducted by Cosmopolitan magazine; I'd hardly expect the results to be any different. While I'm at it, it's worth pointing out that the self-selecting bit applies to AskMen.com's side of the survey as well -- so, grain of salt, ya'll.

But back to the results: An impressive 64 percent of men say they cook at home, and 29 percent brag that they would win in a cooking competition against their partner. (However, the terms of said competition, and whether it would take place by grill or oven, was not specified.) On a related role-reversal note: 85 percent would be willing to be in a relationship with a higher-earning woman.

There are yet more stereotype-shattering finds in the arenas of sex and relationships. Lately, infidelity has been in the air -- or Us Weekly, at least -- but 87 percent of men say they don't "know anyone who has set up a secret Facebook account to conceal a relationship from his girlfriend/wife." As for generally using the Web to cheat -- "through e-mail, Facebook or infidelity services like AshleyMadison.com" -- 70 percent said they haven't. When asked if they would cheat, given the opportunity to get away with it, 38 percent said they weren't "at all likely" to cheat, and that it would go against their morals, but that they "might be tempted" -- fair enough. Relevant to the discussion earlier today about sex and deception, 62 percent said they would never tell a woman they loved her just to sleep with her. That's an increase from 53 percent in last year's survey -- yeah, progress!

That's not to say that there aren't some throwback views of the opposite sex on display: Most men see a woman as promiscuous after she sleeps with her 10th partner and say ladies lose their looks after 40 (which is more generous than a recent survey finding 31 to be the peak of female attractiveness). But those bits are thankfully balanced out by hints of more equitable thinking and what appears to be a slight expansion of the definition of what it means to be a man.