I thought her bland New Delhi fare would bore me, but she taught me about simplicity and connecting to the earth 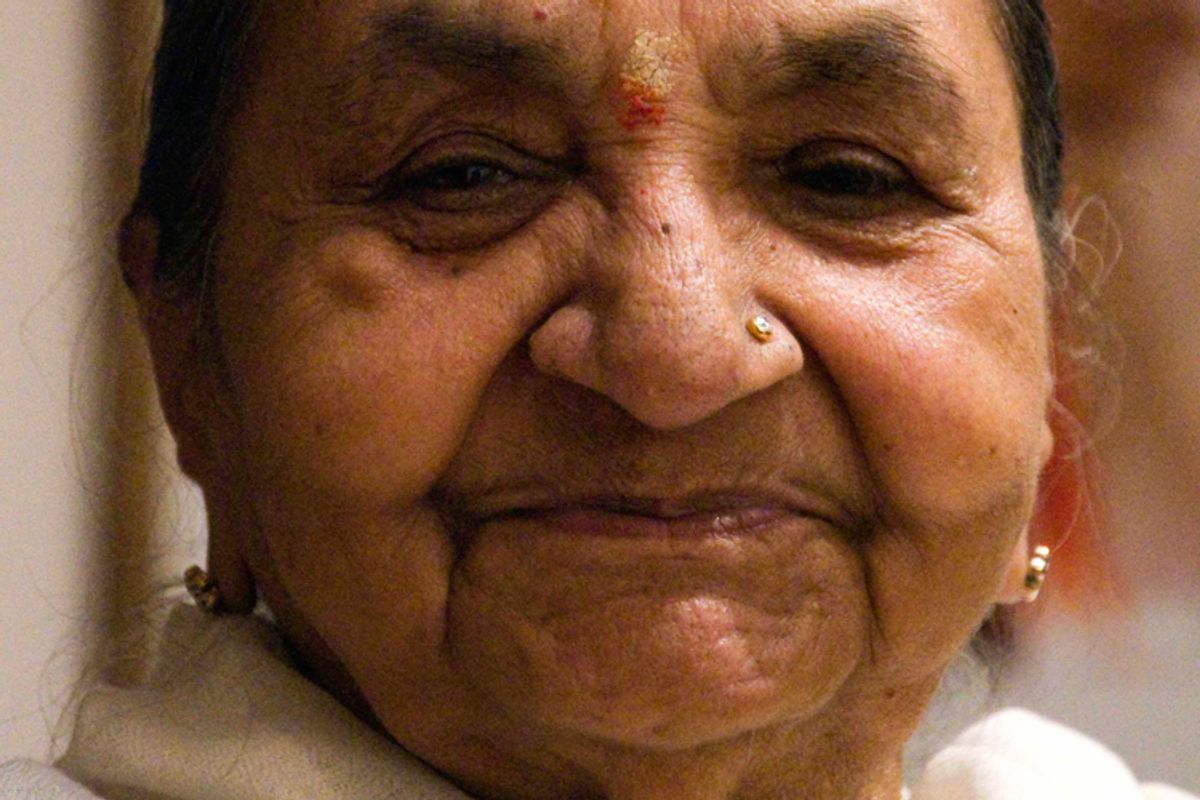 Amma, the author's husband's grandmother, during a Delhi winter.
--

Like most brides, I was nervous on my wedding day. I was worried about food. Specifically that marriage was going to condemn me to years in a culinary wasteland.

Let me explain: The gastronomic offerings in my husband's hometown of New Delhi had been sorely disappointing. Going out involved eating heavy, unimaginative curries — the kind of generic "Indian" food that's served at restaurants called Bombay Palace and Taj Mahal the world over. Staying in and eating at his parents' home seemed to mean simple, almost ascetic meals of roti and subzi (bread and vegetables).

During my initial pre-engagement trips there, I didn’t complain. I figured we’d be visiting Delhi only occasionally once we got married. But then it turned out that Sid had plans for us to live there for at least a year and perhaps even longer.

I panicked. I live to eat. Moving to Delhi was going to be a slow, flavorless death.

After marriage, my new-bride status dictated that I eat with my husband's family every night. I'd go to bed mildly hungry and distinctly homesick, missing the eclectic foods I'd eaten in my cosmopolitan hometown of Bombay. My family had a tight dinner schedule that traveled several time zones: tacos on Tuesdays, falafels on Fridays, Thai on Thursdays, etc. — and I desperately missed all the culinary continent-hopping we did from our kitchen.

Yet, after a few weeks, I found myself looking forward to those meals with Sid's family. It wasn't the food but the conversation and the company that I'd begun to enjoy. Amma, Sid's heavy-set, 87-year-old grandmother, was in charge of dinner. Isolated by her bad knees to a room on the top floor of the house, dinner was when Amma's brood gathered around her, talking, laughing, eating her food. And Amma, who is as talkative as she is temperamental, loved the opportunity for an audience.

Soon I was regularly sitting with Amma for a half hour before dinner. She loved that like her, I was vegetarian. She'd often want to know what my favorite vegetables were. (Okra, if you're interested. Yes, I actually love the slime). And I'd find them on the dinner table the next day. She'd share with me stories from her childhood in a village in North India, tales of waiting feverishly for the first flush of the tiny saffron-hued pairee mango, for the joy of sucking it bone dry and fighting over its pit; of sitting crossed-legged on the kitchen floor, in anticipation of the next hot, butter-filled roti that would be dropped into her plate.

Until then, I knew little about the Bhargava community, the small, tightly knit group of North Indian Brahmins that my husband's family belongs to. Sid, with his itinerant childhood, didn't care to talk about his heritage. But Amma wanted me to know. She told me about their traditions and festivals — the beautiful ritual the family performed every year to celebrate the arrival of spring, throwing fistfuls of wheat husk into a crackling fire as an offering to the gods, and the way the entire family eats from a single silver plate during Diwali, the festival of lights. "We have our own customs, and they are nothing like the North Indian customs shown in Bollywood films," she'd say proudly, referring to the Punjabi rituals that have come to dominate India's cultural landscape.

During one particularly ordinary meal — tiny apple gourds stuffed with chickpea flour and dal (lentils) — it occurred to me that everything that Amma had been saying about the specificity of the community's traditions was true also of the food I'd been eating. This wasn't some watered-down version of the staple Indian meal of dal, roti and subzi, nor was it the creamy, heavy Punjabi food stereotypically tied to the area; it was a wholly different cuisine. I began to realize that these were spices and flavors I’d never tasted before — the apple gourds tasted tantalizingly of nigella seeds, and the dal was seasoned with lashings of tart dried-mango powder. Other meals had exposed me to combinations I hadn’t seen anywhere else: caraway seeds sprinkled on parathas; lentils stuffed inside soft, silky puris (fried, puffed bread); and lentil balls soaked in a watery soup of coriander and dried mango powder. Amma had even completely transformed vegetables that I had hated back in Bombay — bitter gourds were peeled, washed, stuffed and shallow-fried until crisp so that only a pleasant hint of their former bitterness remained.

Just like the little-known Bhargava rituals and customs, here was the little-known Bhargava food — light and simple, devoid of onion and garlic, and free from a heavy dependence on dairy. Influenced by the community's far-reaching spread, it fused the foods of four Indian states: Rajasthan, Uttar Pradesh, Madhya Pradesh and Haryana. I'd moved to Delhi expecting to become thoroughly familiar with oily, calorific curries and fat, doughy nans, but instead had encountered something new — an enduring culinary tradition that had gotten ignored for its more famous cousins.

And slowly, I found that I’d even begun to enjoy Amma’s food. Eating this earthy cuisine had taught me to rein in my philandering taste buds. I'd gotten married expecting to be limited by a restricted diet, but instead, the focused eating forced me to take note of every hint of flavor, to find pleasure in the very suggestion of a spice, and to thoroughly enjoy every individual component of a dish. I even found a spiritual lesson in my experience — this was a call to live in the present, to experience fully the here and now, and to be more conscious of my incessant desire for the new.

Amma's food also taught me to taste the weather outside. Bombay is located on a little cusp of land that juts into the Arabian Sea. It sees only two seasons: hot and wet. Foods vary somewhat with the season, but the changes aren't particularly noticeable. You never feel the chill of winter, but you also never taste spring in a pod of peas. In Delhi, I saw the intimate connection between earth and kitchen. Amma helped me experience the joy of rootedness through the simple act of eating, and she showed me the wonder of nature’s bounty — creamy pumpkins in the fall and winter, simple chhuke matter (tossed peas) in the spring, and gourds, cucumbers and melons in the summer.

Before I knew it, my time in Delhi was up. I moved to New York and found myself in a food fantasyland far more diverse and exciting than even Bombay. Everywhere I looked there was something new to eat — a novel flavor, an unexplored cuisine. And yet I craved Amma’s seasonal cooking. I realized then that Delhi had changed me in ways I never would’ve imagined. I can never go back to my hedonistic, almost reckless eating. I still love new flavors, but I'm now rooted in the understanding that a straightforward dish of pumpkin cooked in mustard seeds eaten in the dusk of the North Indian autumn can be as satisfying as tacos on Tuesday and Thai on Thursday.

Amma attempted to teach me some of her recipes over the phone, but they never turned out the way they did when I was at her dinner table, gazing at the darkening sky. As Sid and I approach the one-year anniversary of our time away from Amma's kitchen, I share with you two of my favorite recipes — Bhargava-style chhote aloo (baby potatoes) and kaddu ki subzi.

I love this dish because it's tart and spicy, and completely unlike any potato-based curry I've eaten before. Disclaimer: The name is my own since I couldn't find any sort of formal name for the recipe .

This recipe probably comes from Uttar Pradesh. I love it because the addition of heat really adds to the pumpkin's natural sweetness. It's popular in many North Indian kitchens but impossible to find on a restaurant menu.