Another ceremonial monument found near Stonehenge 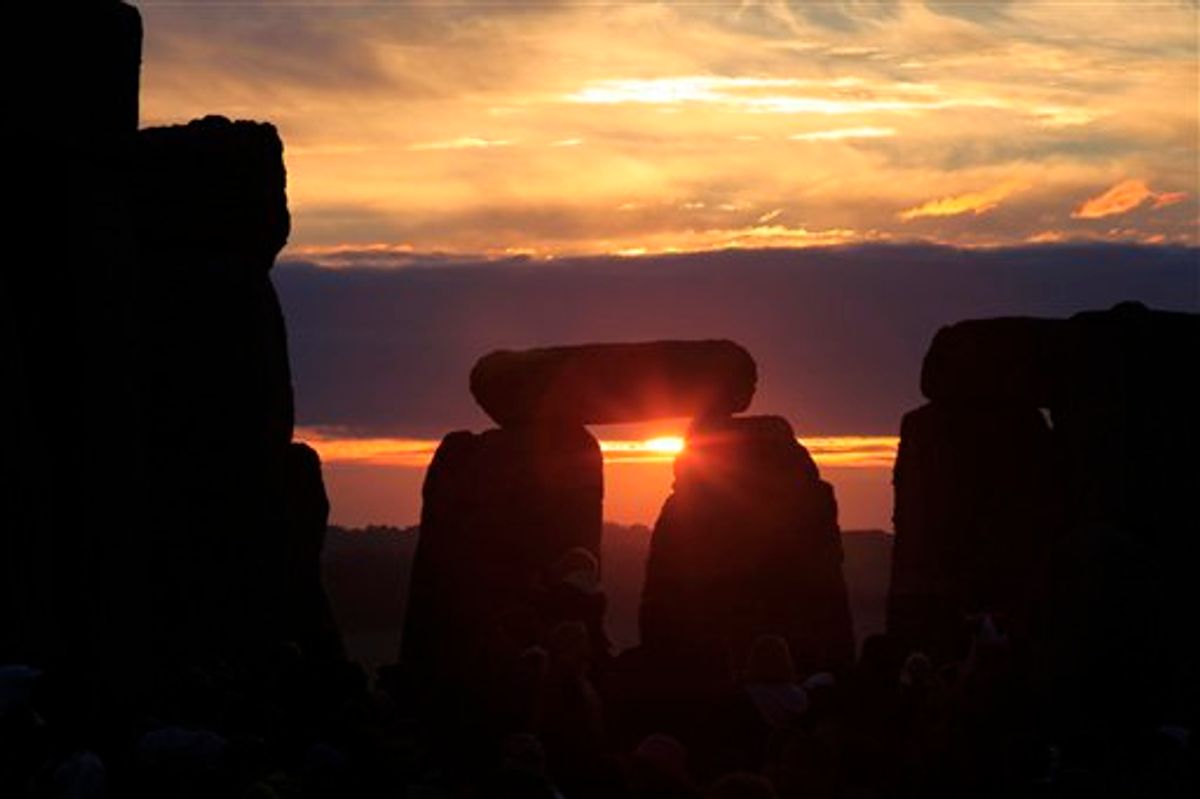 The sun is rising behind the Stonehenge monument in England, during the summer solstice shortly after 04:52 am, early Monday, June 21, 2010. Druids, pagans and partygoers crammed into the mystic stone circle to cheer, bang drums and shake tambourines in an effort to greet the sun on the longest day of the year in the northern hemisphere, the summer solstice. Stonehenge, on the Salisbury Plain about 140 kilometers (90 miles) southwest of London, was built over three phases between 3,000 B.C. and 1,600 B.C. It is one of Britain's most popular tourist attractions; more than 750,000 people visit every year. (AP Photo/Lefteris Pitarakis) (AP)
--

Scientists scouring the area around Stonehenge said Thursday they have uncovered the foundations of a second circular structure only a few hundred meters (yards) from the world famous monument.

Like Stonehenge itself, the structure's precise purpose remains a mystery. But it's one of an expanding number of discoveries being made around the site -- something experts say is helping to show that Stonehenge was once much more than just a cluster of sandstone blocks standing in an empty field.

"In its day Stonehenge was at the center of the largest ceremonial center in Europe," said archaeologist Tim Darvill, who helped lead a recent excavation at Stonehenge but wasn't involved with this find. He said the discovery "really shows how much there is still to learn and how extensive the site really was."

The foundations -- a ring of holes surrounding a cluster of deep pits -- are facing Stonehenge from about 900 meters (985 yards) away, according to a ground mapping project led by University of Birmingham archaeology professor Vince Gaffney.

The pits, long since filled with earth, were probably dug to secure a circle of wooden poles, Gaffney said.

"It's a timber equivalent to Stonehenge," he told the BBC, saying it was the "first major ceremonial monument" found in the area in 50 years.

What kind of ceremonies went on there is unclear. It joins a growing complex of tombs and mysterious Neolithic structures found across the area.

The closest equivalent is probably the nearby Woodhenge, a monument once composed of six rings of wooden posts enclosed by an earth embankment. Excavations there in the 1970s revealed the body of child whose skull had been split buried at the center of the henge -- hinting at the possibility of human sacrifice.

Other sites include the Cursus, a 3-kilometer-long (1.8-mile-long) earthwork whose purpose remains unknown and a group of overgrown tombs known as the King's Barrows.

Last year, researchers announced the discovery of a small prehistoric circle of stones on the banks of the nearby River Avon. Experts speculated the stone circle -- dubbed "Bluehenge" because it was built with bluestones -- may have served as the starting point of a processional walk that began at the river and ended at Stonehenge.