I was Betty Draper

Everyone loves Peggy and Joan. But it's "Mad Men's" brattiest, least feminist character I really identify with 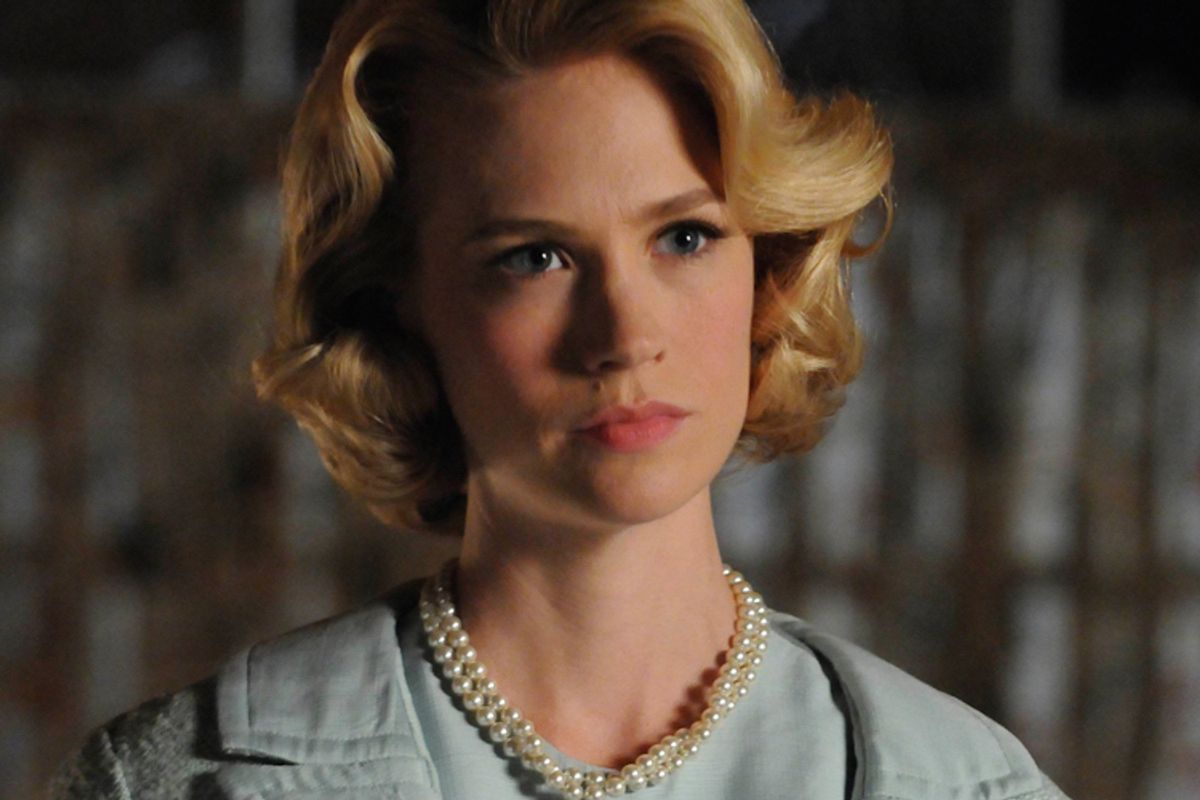 "Are you going off to be a Mad Man?" I asked my husband as he downed the last of his coffee, slid his laptop into its case, and headed for the door.

"No," he said, giving his shirttail a final tug. "But I'm about to be an Irritated Man."

I can't blame him. Since "Mad Men" entered the cultural consciousness, I have harassed my husband, an advertising creative director, with a multitude of questions, mostly of the facetious variety. "No," he replies, with diminishing patience, "I don't start drinking at 10 a.m., I'm not allowed to use my expense account for prostitutes, I don't compulsively pat the bottoms of secretaries at work. We don't even have secretaries anymore. That's a profession whose time has passed, like silversmiths and fletchers and the people who make barrels."

"Coopers," I say. "A person who makes barrels is called a cooper. As in Sterling Cooper."

"Bye, Don," I say as the door closes. I turn to my cat. "Sally," I say sharply, "bring me my cigarettes from the bedroom. Then go watch TV." The cat stares at me for a few moments before contorting her torso to delicately slurp at her own anus, an entirely appropriate response. I wonder how many hours it will be before I can reasonably head for the liquor cabinet.

I'm not actually crazy. (I may be a little OCD about pop culture.) Deep down, I know that the liquor-soaked miasma of Sterling Cooper has about as much in common with my husband's office as "Dynasty's" Denver-Carrington has with BP. My husband, despite an appreciation for a well-mixed martini and a mildly sadistic gruffness with underlings, is not Don Draper; Don Draper, for one thing, would never leave the house with toothpaste in his beard. The only thing that has really made him be like Don was that for so long, I felt like Betty.

Women of my generation weren't raised to be Betty. Our mothers, the trailblazers, told us we could be anything we wanted to be — brain surgeon, judge, astronaut. The possibility of becoming a housewife seemed scarcely a step up from being a prostitute or a drug mule: a cautionary tale, something you could grow up to be, but only if you were too lazy or stupid or unlucky to become president of the United States. It was the option for people who didn't have any options, and if you did have options — if, for instance, you had good parents and a good education and hadn't been raised to be some kind of veiled brood mare on a fundamentalist religious compound in the desert — then you really had no excuse. Every other young woman I know seems to identify with Peggy Olson, pluckily battling her way up the corporate ladder, or perhaps more poignantly with Joan Holloway, a confident, organizational superhero destined never to get her full due. Everyone also seems to be of the opinion that Betty is a vain, spoiled brat that they want to smack in the face.

When I first started watching "Mad Men," during the show's second season, I wasn't technically a housewife, but being a writer can feel eerily close sometimes — the endless stretch of days spent puttering half-dressed through the silent apartment, the ever-growing list of errands and things to pick up "as long as you're home"; each quart of milk and bag of dry cleaning a tangible reminder that you don't have anything better to do. My first book, for which I had such high hopes and such good reviews, was threatening to sink without a trace. Every day, while my husband was at work and the industrious, overachieving Peggys of my acquaintance were off conquering Manhattan one legal brief at a time, I sat at my sad little desk in the corner of the living room, working joylessly on underpaid freelance assignments and watching, with not-so-quiet desperation, my Amazon rating plummet (my people are not Nordic). A high-class problem, sure, but sometimes the worst heartbreak comes wrapped in the prettiest package, and if Betty Draper's generation was indoctrinated never to admit to disappointment in marriage, mine was just as trained not to admit disappointment in a career. And above all, I had to hold on to my career, because without it, what was I? A housewife. A failure to feminism, to my mother, to myself.

So I felt that I understood Betty Draper, even in her less than flattering moments. I empathized when she snapped at her children, and I understood her preening, designed to elicit the admiration of men and the envy of her friends. I understood the icy rage when she coldly offered her cheek to Don to kiss in the mornings. It wasn't because of the lipstick on his collar or the empty bottle of rye — or at least, not just because. It was because he got to go off to be busy and brilliant and essential, while she got to stay at home, lining the drawers with stupid contact paper. The Drapers' spats reminded me of the fights I had with my husband when I asked why he was at work until 2 in the morning, why it seemed he had to leave the country three weeks out of the month. "You don't understand," he would answer angrily. "You don't have to be financially responsible for another person." And I would shout back, more furious with myself than him: "God! Don't you think I wish I was?"

The climax of my Betty Draper overidentification came near the end of last season, in the episode called "Souvenir," when Don goes to Rome on business and takes Betty, who, like me, lived in Europe in her very early 20s, a time she spoke of with obvious wistfulness. Removed from suburbia, she transforms into a knowing cosmopolitan sophisticate, revisiting not only the woman she once was but also the one that, under different circumstances, she could have become. In the episode's last scene, the Drapers have returned to Ossining, N.Y. (is it really a coincidence that Matthew Weiner chose for their home a town most famous for its maximum-security prison?) and Don, his face full of hope, presents Betty with the titular souvenir, a gold bracelet charm shaped like the Colosseum.

Betty says: "Now I'll have something to look at when I talk about that time we went to Rome."

A bracelet charm. A trophy decorating a trophy; an adventure, an identity, reduced to something cute and useless, like a purse for a doll.

I cried for almost two hours after that episode. I felt that nothing I had ever seen on TV had captured my personal experience so profoundly. And then, all that crying must have dislodged some kind of obstruction in my brain, because I suddenly remembered something I hadn't since the Season 3 premiere:

Betty Draper is a fictional character.

One day, Betty Draper will be a crossword puzzle clue, and I will still be (God willing) a living, breathing human. This was not 1963. I wasn't trapped. I had options. I had a career (if not, exactly, a job), a husband with a verifiable birth certificate, and a fairly healthy grasp on my emotional life. There was no need to avenge myself on innocent birds or dining room furniture, or leave a man I hardly knew for another man I hardly knew expecting a different result — the very definition of insanity, and, as I mentioned earlier, I am not crazy.

Life is full of disappointment, but my disappointments were my own, not assigned to me by a team of Cheever-wielding scriptwriters. I found this idea oddly liberating. If I had put myself in this funk, I could get myself out of it. All I needed was to cut out the Richard Yates, quit drinking in the middle of the day, and for "Mad Men" to take a well-deserved hiatus.

Besides, I have a feeling Season 4 is going to be all about Trudy Campbell.