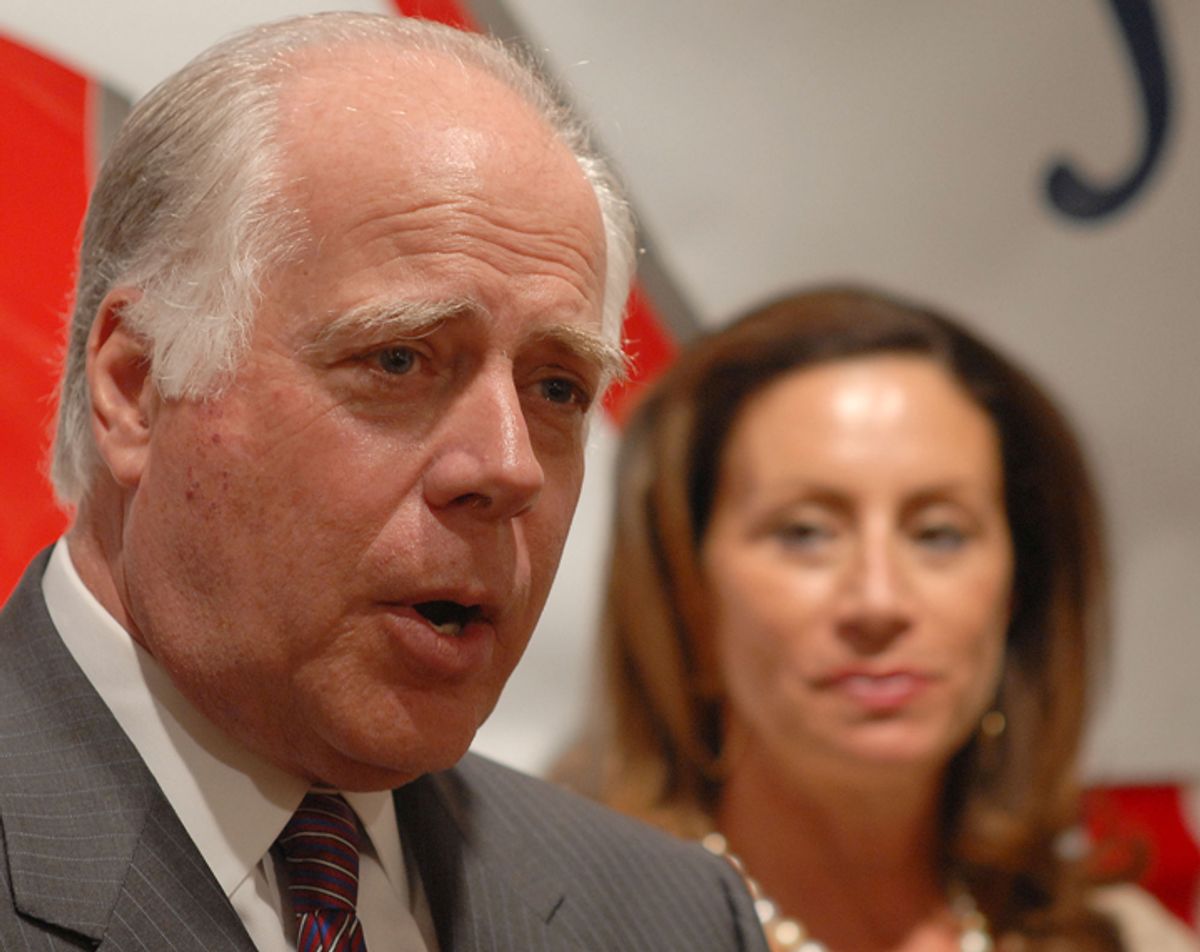 ** FILE ** Republican candidate for the U.S. Senate, John Raese, left, accompanied by his wife Liz, outlines his platform for the Republican party nomination from his campaign office in Charleston, W.Va., Friday, April 7, 2006. Raese preaches against taxes, government regulation and withdrawing from Iraq, a message that helped him rise above a large Republican field in the May primary. But the wealthy Morgantown media owner and industrialist has faced an uphill battle in spreading his gospel among the Democratic base of his general election opponent, incumbent Sen. Robert C. Byrd. (AP Photo/Bob Bird, File) (Bob Bird)
--

Even after state lawmakers passed a law allowing her to run for the U.S. Senate while also running to keep her House seat, Shelley Moore Capito, the best GOP hope for taking Robert Byrd's Senate seat, has decided not to run. So West Virginia Gov. Joe Manchin will probably serve out the remainder of Byrd's term. Unless wealthy industrialist John Raese gets his way!

Raese has run for Senate twice before. He almost knocked off Jay Rockefeller in 1984, and despite spending $2.2 million of his own money, he was destroyed by Byrd in 2006. Raese's family owns Greer Industries, a diverse company involved in asphalt, limestone and, of course, media. Greer publishes the Dominion Post newspaper in Morgantown, W.Va., and owns 19 radio stations across the state. It was on one of those stations that Raese announced his candidacy, by making two stupid jokes:

He also compared Manchin, of Italian and Czech ancestry, to fictional Mafia boss Tony Sopranao from the HBO TV series. He referred as well to Sen. Carte Goodwin, Manchin's temporary appointee to the Byrd seat pending the special election, to "Carte Blanche."

According to Raese, questionable jokes concerning the ethnic background of one of his opponents are just examples of his "quirky sense of humor."

Another example, perhaps, was this classic newspaper ad from his 2006 campaign, in which Raese posed with a ridiculous elephant gun. In the ad, he had the gun on his shoulder, pointing behind him. And his finger was on the trigger. Which is something of a faux pas, among people who actually know how to handle guns.

(Also running for the seat as a Democrat: 95-year-old Ken Hechler, a legendary West Virginia politician who wrote speeches for Harry S. Truman, served in the House of Representatives, and was West Virginia's secretary of state. He receives my endorsement, because how amazing would it be to replace the oldest sitting senator with an even older guy?)