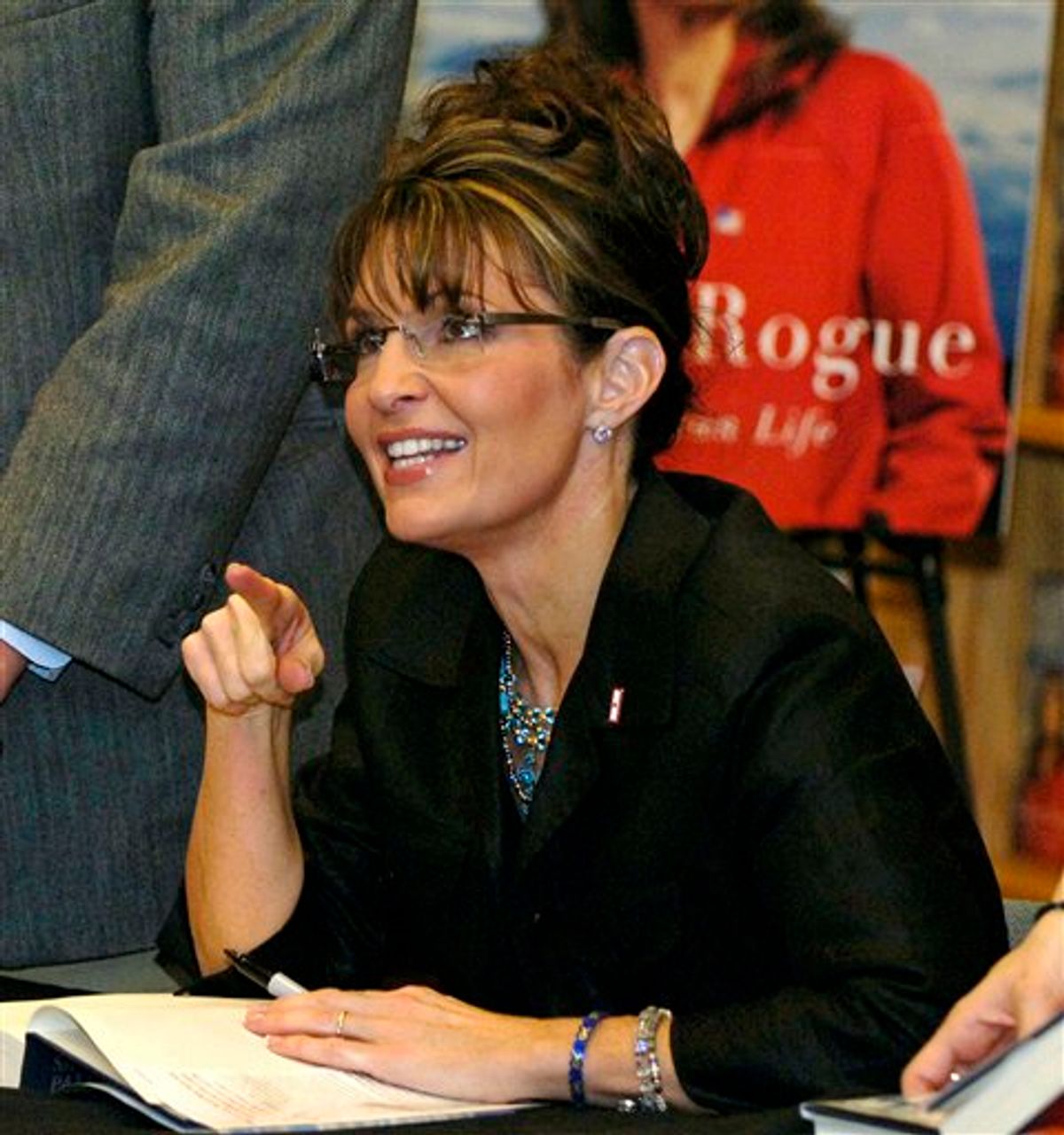 FILE - In this Nov. 21, 2009 file photo, Sarah Palin interacts with a customer during a book-signing event in Henrietta, N.Y. A year after her abrupt resignation as Alaska governor, Palin has evolved into a political personality writ large, commanding weeks of headlines for a single Facebook observation _ see health care "death panels" _ and six-figure speaking fees from groups clamoring for her words. Going rogue with a best-selling memoir only added to her aura among the conservative faithful and she has easily eclipsed other Republicans as the coveted endorsement this election year. (AP Photo/Don Heupel, File) (AP)
--

In a brilliant move that simultaneously scrapes the bottom of the Journolist e-mail barrel and guarantees a ton of coverage on Fox, today's Tucker Carlson Internet News story on "secret" messages from liberal journalists concerns the reaction to John McCain's selection of Sarah Palin as his running mate in 2008.

The "scandal" is that these liberal journalists, commentators and academics apparently spent some time trying to figure out who Palin was, and some of them thought the Palin selection would prove to be a mistake, because of her inexperience.

Do you remember 2008? At the end of August, during the Democratic convention, John McCain picked Sarah Palin as his running mate. Hardly anyone not named Bill Kristol knew anything about her. All I knew was that she was the governor of Alaska and that she had a reputation for being not corrupt.

So the members of Journolist were doing what every reporter and political junkie in the nation was doing: Figuring out who Palin was, how McCain would sell her to the nation, and how Obama would campaign against her. And because many of the participants were avowed liberals, who wrote liberal things for opinion columns or liberal think tanks or blogs, some of the Journolist commentary on Palin concerned the best ways to campaign against her.

There's groupthink here but, as usual, no conspiracy. None of the liberals can even agree on whether or how to criticize Palin.

Here's an example of the coordinated attack, from think tanker Michael Cohen:

The conversation began with a debate over how best to attack Sarah Palin. “Honestly, this pick reeks of desperation,” wrote Michael Cohen of the New America Foundation in the minutes after the news became public. “How can anyone logically argue that Sarah Pallin [sic], a one-term governor of Alaska, is qualified to be President of the United States? Train wreck, thy name is Sarah Pallin.”

Even though Michael Cohen proved completely correct, Strong quotes a response from another Journolist member saying that the experience argument would just help McCain.

This is the best part, buried at the end of the story:

Time’s Joe Klein then linked to his own piece, parts of which he acknowledged came from strategy sessions on Journolist. “Here’s my attempt to incorporate the accumulated wisdom of this august list-serve community,” he wrote. And indeed Klein’s article contained arguments developed by his fellow Journolisters. Klein praised Palin personally, calling her “fresh” and “delightful,” but questioned her “militant” ideology. He noted Palin had endorsed parts of Obama’s energy proposal.

So the result of this secretive liberal smear campaign against Sarah Palin was a blog post at Time.com summing up the disparate reactions of the journalists and commentators on the off-the-record listserv to the Palin selection? In other words, this story was already written two years ago.

There's so little here to support the claim that Journolist was a conspiracy to coordinate media coverage that no one serious will come away from this story still imagining that. But the audience isn't "serious" people, on the right or left.

Jonathan Strong ends his story on this ominous note: "That was all on the day of the announcement."

You know what that means, right? Up next: the Bristol and Trig stuff.