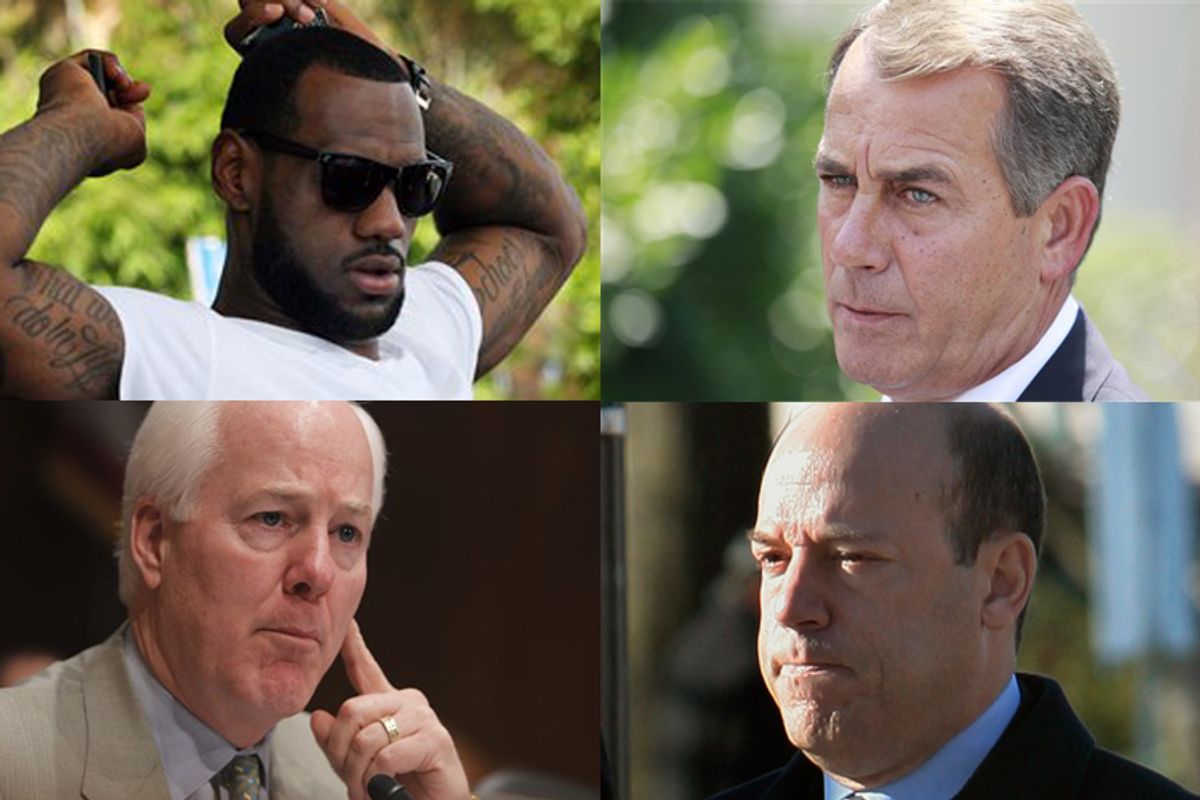 If people took politics as seriously as sports, they might notice that the Republicans are acting a lot like LeBron James. He’s the basketball star who, after basically rolling over and playing dead during the playoffs against the Boston Celtics, made his free-agent decision a multimedia spectacle. Now he calls himself “King James,” as if he’s already won next year’s NBA title and MVP trophy.

Most fans outside his new home in Miami react as follows: “Yo, LeBron. First win something, then swagger.”

So it is with GOP congressional leaders already gloating in advance of November’s midterm elections. Several are even warning Democrats not to try any funny business in between the election and the swearing-in of a new Congress next January.

Here’s what Obama ought to say: “Yo, John, Dick, Ari. First win, then gloat.”

Given the shaky economy — the single best predictor of midterm elections — it would be surprising if Republicans didn’t make substantial gains this fall. Even so, GOP cheekiness can’t help but recall the 1998 midterms, when Republicans, focused like a laser on President Clinton’s zipper, were shocked to lose five House seats — then impeached him anyway in a lame-duck session.

Want to throw a scare into Boehner? Nationalize country clubs. According to Politico, his PAC laid out $82,998 on 119 Boehner-sponsored golf outings last year. No wonder he stays as tan as a TV weatherman.

That said, there’s no reason to treat a GOP takeover of the House or Senate as inevitable or even particularly likely. The campaigning hasn’t really begun, and there’s some evidence Obama may be rounding into playing shape — ready to call the Republicans on their obstructionism.

During a recent radio address, he hammered them for refusing to extend unemployment benefits for long-term jobless workers even while demanding an extension of the Bush tax cuts for millionaires. “So after years of championing policies that turned a record surplus into a massive deficit, including a tax cut for the wealthiest Americans,” Obama said, “they’ve finally decided to make their stand on the backs of the unemployed.”

Exactly. With 14 million Americans jobless, Republicans are all about cutting Scrooge McDuck’s taxes. Also Rush Limbaugh’s, Donald Trump’s and, come to think of it, LeBron James’. Toward which end they’ve begun ritually chanting one of the most easily refuted GOP zombie lies: the one that says that slashing Uncle Scrooge’s income taxes leads to greater government revenues.

Get it? Actually, if you’re like most Americans, there’s an excellent chance you don’t. So here are the numbers, courtesy of former Reagan administration Treasury official Bruce Bartlett’s blog, “Capital Gains and Games.”

In 2000, President Clinton’s last year in office, total federal tax revenues totaled $2,310 billion. Then came the Bush tax cuts. By 2004, revenues dropped to $1,901.1 billion, although the population and economy had grown.

Revenues wouldn’t return to Clinton-era levels until 2006, by which time the unfunded Iraq and Afghanistan wars, Bush’s Medicare drug benefits, etc., had driven spending far higher. Hence the Bush administration’s doubling of the national debt; hence too the federal budget deficit of $1.3 trillion in fiscal year 2009, which began Oct. 1, 2008.

So when you hear the likes of McConnell and Sen. John Cornyn, R-Texas, claiming that Obama has tripled the deficit, that’s another zombie lie. Bush handed it to him, along with the TARP bailout.

Obama’s problem is that people don’t know it. A recent Pew survey showed that only 34 percent of Americans grasp that the much-resented Wall Street bailout was a Bush production. Two-thirds blame Obama. (He did vote for it.)

Too accommodating by half, another of the president’s political weaknesses appears to be the reluctance of an intellectual to repeat himself. It’s almost as if Obama doesn’t fully appreciate that he’s no longer talking to University of Chicago law students, but to scared, distracted voters who may know all about Bristol Palin’s love life, but next to nothing about taxes, budgets and jobs.

A corporate VP of my acquaintance says a good rule of thumb is that employees needed to be told at least eight times in eight different ways to fully absorb changes in company policy. The Republican noise machine is particularly good at message discipline and repetition, especially when they’re lying.

So sharpen your metaphors along with your elbows, Mr. President. Simplify, amplify and repeat.